Evogeneao - - Darwin 2009: A Pittsburgh Partnership. Lecture-8.htm. The Tree of Life. If you want a hardcopy of this poster, you can either (1) download the PDF file here for free and take it to a print shop (Kinkos will work) and get it printed as a large poster (it prints 24" x 48"), or (2) buy it online at Zazzle.com (click here to jump to the poster). 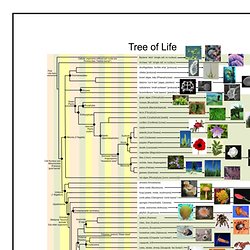 The words in the image above may look a bit blurry because this web page is displaying a compressed JPEG image on this web site (to improve download time). If you make a print from the PDF file (or zazzle) all the words and lines will be crisp and clear. I created the poster with the Xara Xtreme drawing program. Keywords: Tree of Life, evolution, cladogram, cladistics, darwin, phylogenetic tree, phylogenetics, evolutionary tree, darwin, poster.

The Difference Between Orthologous & Paralogous Genes. The molecular clock of evolution. One conspicuous attribute of molecular evolution is that differences between homologous molecules can readily be quantified and expressed, as, for example, proportions of nucleotides or amino acids that have changed. 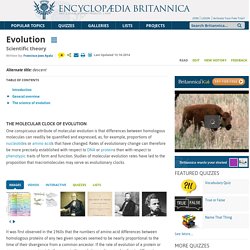 Rates of evolutionary change can therefore be more precisely established with respect to DNA or proteins than with respect to phenotypic traits of form and function. Studies of molecular evolution rates have led to the proposition that macromolecules may serve as evolutionary clocks. It was first observed in the 1960s that the numbers of amino acid differences between homologous proteins of any two given species seemed to be nearly proportional to the time of their divergence from a common ancestor. If the rate of evolution of a protein or gene were approximately the same in the evolutionary lineages leading to different species, proteins and DNA sequences would provide a molecular clock of evolution. Consider, for example, the figure depicting the 20-organism phylogeny. Lots of mnemonic devices & memory devices for Biology. What about Fitness? Of course, fitness is a relative thing. 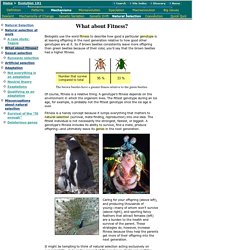 A genotype’s fitness depends on the environment in which the organism lives. The fittest genotype during an ice age, for example, is probably not the fittest genotype once the ice age is over. Evolution. Evolution is the cumulative change in the heritable characteristics of a population It will be driven by random processes (genetic variation) and differentially selective processes (natural selection)There are two main types of evolution: microevolution and macroevolution Microevolution Microevolution describes evolutionary changes that occur over a relatively short period of geologic time (such as between generations) and results in diversification within a species. 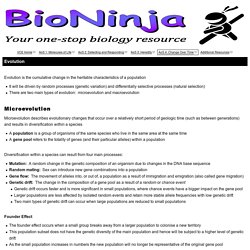 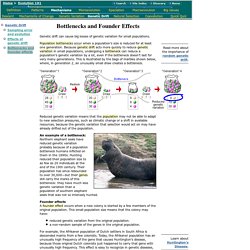 For example, the Afrikaner population of Dutch settlers in South Africa is descended mainly from a few colonists. Today, the Afrikaner population has an unusually high frequency of the gene that causes Huntington’s disease, because those original Dutch colonists just happened to carry that gene with unusually high frequency. AP Biology Chapter 22 flashcards. Defining adaptation. Misconceptions about natural selection and adaptation : Defining adaptation Just as it is tempting to take natural selection to extremes, it is tempting to look for the evolutionary advantage of any trait of an organism — in other words, to see adaptations everywhere. 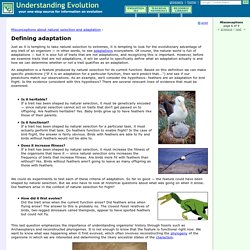 Of course, the natural world is full of adaptations — but it is also full of traits that are not adaptations, and recognizing this is important. However, before we examine traits that are not adaptations, it will be useful to specifically define what an adaptation actually is and how we can determine whether or not a trait qualifies as an adaptation. An adaptation is a feature produced by natural selection for its current function. We could do experiments to test each of these criteria of adaptation. This last question emphasizes the importance of understanding organisms' history through fossils such as Archaeopteryx and reconstructed phylogenies. 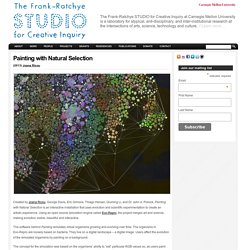 John A. Pollock, Painting with Natural Selection is an interactive installation that uses evolution and scientific experimentation to create an artistic experience. Using an open source simulation engine called Evo-Repro, the project merges art and science, making evolution visible, beautiful and interactive. The software behind Painting simulates virtual organisms growing and evolving over time. The organisms in Evo-Repro are loosely based on bacteria.

The concept for the simulation was based on the organisms’ ability to “eat” particular RGB values so, as users paint different colors, they are effectively providing different food or environments and the organisms respond accordingly. Following the development of an interactive version of the simulation, a kiosk was installed at the Children’s Museum of Pittsburgh in the winter of 2012-13. “Painting” installation at the Children’s Museum. Adaptation. To survive and reproduce, all living organisms must adjust to conditions imposed on them by their environments. 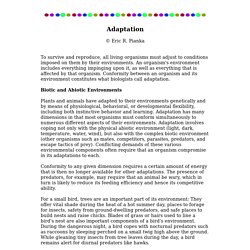 An organism's environment includes everything impinging upon it, as well as everything that is affected by that organism. Conformity between an organism and its environment constitutes what biologists call adaptation. Biotic and Abiotic Environments Plants and animals have adapted to their environments genetically and by means of physiological, behavioral, or developmental flexibility, including both instinctive behavior and learning. Adaptation has many dimensions in that most organisms must conform simultaneously to numerous different aspects of their environments. Conformity to any given dimension requires a certain amount of energy that is then no longer available for other adaptations.

Many birds cope with changing seasonal conditions by migrating to warmer places at lower latitudes where there is more food. Factors that Affect Adaptation Fisher, Ronald A. 1930.