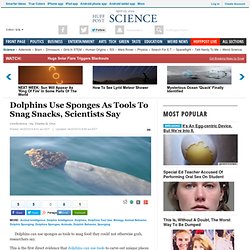 This is the first direct evidence that dolphins can use tools to carve out unique places in the food chain, scientists added. Dolphins are often ranked among the smartest members of the animal kingdom. They engage in complex forms of communication, may recognize themselves in mirrors, can understand sign language, and can learn to poke an underwater keyboard to request toys to play with. Recently, scientists discovered Indo-Pacific bottlenose dolphins in Shark Bay off the coast of Australia apparently use tools in the wild. Insects With 'Female Penis' May Hold Clues To The Evolution Of Genitalia.

This is a female insect -- and scientists say that is her "penis. 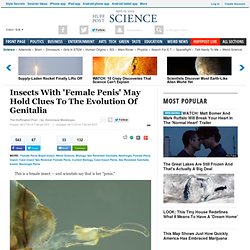 " That's right. Scientists say they've discovered four species of Brazilian cave insects with sex-reversed genitalia. The females possess a penis-like organ, the males a vagina-like organ. Snail Turns Flower Into An Umbrella, And Proves He's The Thriftiest Mollusk Out There (PHOTO) Crows Have The Reasoning Of A Seven-Year-Old Human. New Caledonian crows have a reasoning ability rivalling that of a human seven-year-old, research has shown. 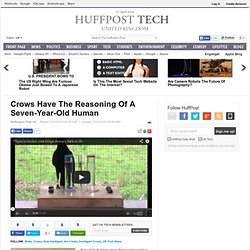 Scientists came to the conclusion after subjecting six wild crows to a battery of tests designed to challenge their understanding of causal relationships. The "water displacement" tasks were all variations of the Aesop's fable in which a thirsty crow drops stones to raise the level of water in a pitcher. In the study, crows worked out how to obtain floating food rewards by dropping heavy objects into water-filled tubes. They demonstrated an ability to drop sinking rather than floating objects, solid rather than hollow objects, to choose a high water level tube over one with low water level, and a water-filled tube over one filled with sand.

Goats Play On Metal Sheet. DNA From Bone Of Human Ancestor Is Oldest Of Its Type, Dates Back 400,000 Years. NEW YORK (AP) — Scientists have reached farther back than ever into the ancestry of humans to recover and analyze DNA, using a bone found in Spain that's estimated to be 400,000 years old. 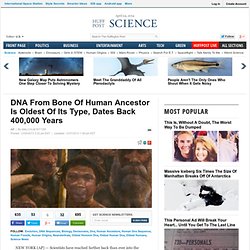 So far, the achievement has provided more questions than answers about our ancient forerunners. The feat surpasses the previous age record of about 100,000 years for genetic material recovered from members of the human evolutionary line. Men and women's brains are 'wired differently' 3 December 2013Last updated at 08:45 ET Men and women's brains are connected in different ways which may explain why the sexes excel at certain tasks, say researchers. 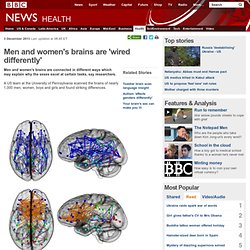 A US team at the University of Pennsylvania scanned the brains of nearly 1,000 men, women, boys and girls and found striking differences. The "connectome maps" reveal the differences between the male brain (seen in blue) and the female brain (orange) Male brains appeared to be wired front to back, with few connections bridging the two hemispheres.

Newly Discovered HIV Strain, A3/02, Linked With Faster Development Of AIDS. People with a newly discovered strain of HIV may develop AIDS faster than other strains of the virus, according to a new study in the Journal of Infectious Diseases. 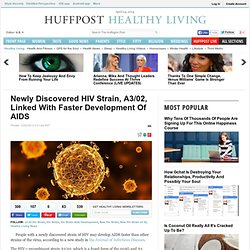 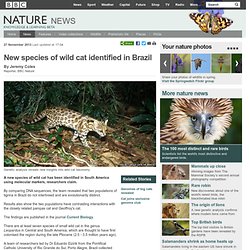 By comparing DNA sequences, the team revealed that two populations of tigrina in Brazil do not interbreed and are evolutionarily distinct. Results also show the two populations have contrasting interactions with the closely related pampas cat and Geoffroy's cat. The findings are published in the journal Current Biology. What the Heck Is That? Animals You Didn't Know Existed. What has 11 appendages coming out of its nose? 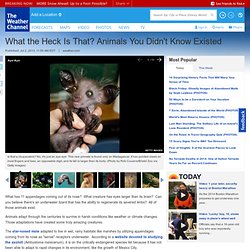 What creature has eyes larger than its brain? Can you believe there's an underwater lizard that has the ability to regenerate its severed limbs? All of those animals exist. Animals adapt through the centuries to survive in harsh conditions like weather or climate changes. Those adaptations have created some truly amazing creatures. Seahorses stalk their prey by stealth. 26 November 2013Last updated at 12:55 ET By James Morgan Science reporter, BBC News Seahorse, or sea monster? 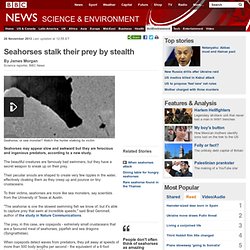 Watch the hunter stalking its victim Seahorses may appear slow and awkward but they are ferocious and ingenious predators, according to a new study. The beautiful creatures are famously bad swimmers, but they have a secret weapon to sneak up on their prey. Their peculiar snouts are shaped to create very few ripples in the water, effectively cloaking them as they creep up and pounce on tiny crustaceans. To their victims, seahorses are more like sea monsters, say scientists from the University of Texas at Austin. Ancient horse bone yields oldest DNA sequence. 26 June 2013Last updated at 13:46 ET By Jonathan Ball BBC News The study massively extends the time period for which DNA can be used to reveal ancient biological secrets. 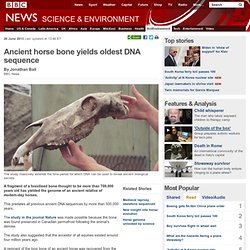 Marsupial Fossils Discovered in Australia May Fill Big Gap In Continent's Environmental History. Paleontologists have uncovered a fossil field in Australia that fills a large gap in the continent's environmental history, and contains several previously unknown ancient species of marsupials and bats. Researchers at the University of New South Wales discovered the site near the Riversleigh fossil field, an UNESCO World Heritage site, in northwest Queensland last year, and have since collected nearly 4,000 lbs. (1,800 kilograms) of rock for analysis, according to a statement from the university. Preliminary analyses suggest that the fossils formed about 13 million to 5 million years ago — a period marking Australia's transition from a warm, tropical climate to the arid climate that persists today and an epoch largely missing from the known fossil record.

Ecuador's Galapagos islands get on Google Street View. 12 September 2013Last updated at 20:14 ET Street View allows users to explore a dive with sea lions off the Galapagos coast Some of the striking landscapes of Ecuador's Galapagos islands can now be explored online on Google Street View. The launch marks the 178th anniversary of the British scientist Charles Darwin's visit, which inspired his theory of natural selection. The high-definition 360 degrees pictures are a joint project between Google, the Galapagos National Park and the Darwin Foundation. Fungus network 'plays role in plant communication' 10 May 2013Last updated at 03:10 ET Mycorrhizae are mutualistic - they both need and are needed by the plants whose roots they inhabit Plants can communicate the onset of an attack from aphids by making use of an underground network of fungi, researchers have found.

Instances of plant communication through the air have been documented, in which chemicals emitted by a damaged plant can be picked up by a neighbour. But below ground, most land plants are connected by fungi called mycorrhizae. The new study, published in Ecology Letters, demonstrates clearly that these fungi also aid in communication. It joins an established body of literature, recently reviewed in the Journal of Chemical Ecology and in Trends in Plant Science, which has suggested that the mycorrhizae can act as a kind of information network among plants. The team concerned themselves with aphids, tiny insects that feed on and damage plants. Mouse cloned from drop of blood. 27 June 2013Last updated at 02:02 GMT By Helen Briggs BBC News The mouse was cloned from a blood cell Scientists in Japan have cloned a mouse from a single drop of blood.

Circulating blood cells collected from the tail of a donor mouse were used to produce the clone, a team at the Riken BioResource Center reports in the journal Biology of Reproduction. The female mouse lived a normal lifespan and could give birth to young, say the researchers. Scientists at a linked institute recently created nearly 600 exact genetic copies of one mouse. DNA hints at earlier dog evolution - BBC News. Swedish researchers say that dogs may have been domesticated much earlier than some other studies suggest. A genetic study indicates that dogs may have begun to split form wolves 27,000 years ago.

Genes Suggest European Women at Root of Ashkenazi Family Tree. Can a Jellyfish Unlock the Secret of Immortality? Meteorite Brought Life Ingredients To Earth In 2012, Scientists Say. From Great Grandma to You. The Top 10 Animal Superpowers. Genetic 'Adam & Eve' Chromosome Study Traces All Men To Man Who Lived 135,000 Years Ago. Almost every man alive can trace his origins to one man who lived about 135,000 years ago, new research suggests. And that ancient man likely shared the planet with the mother of all women.