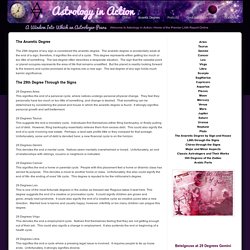 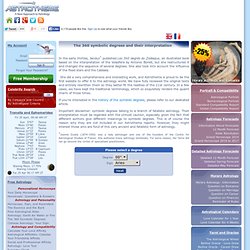 She also took into account the influence of the fixed stars and the Cabbala. She did a very comprehensive and interesting work, and Astrotheme is proud to be the first website to offer it to the astrology world. The Astrologer’s Degrees, a Study of the Evidence. « Chirotic Journal. Today I wish to look in some detail at a specific phenomena that is of great interest to the astrologer, the provocatively named “Astrologer’s Degree.” 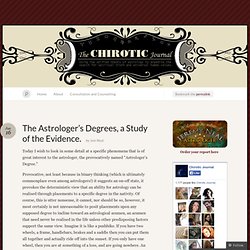 Provocative, not least because in binary thinking (which is ultimately commonplace even among astrologers!) It suggests an on-off state, it provokes the deterministic view that an ability for astrology can be realised through placements to a specific degree in the nativity. Of course, this is utter nonsense, it cannot, nor should be so, however, it most certainly is not unreasonable to posit placements upon any supposed degree to incline toward an astrological acumen, an acumen that need never be realised in the life unless other predisposing factors support the same view. Imagine it is like a pushbike. If you have two wheels, a frame, handlebars, brakes and a saddle then you can put them all together and actually ride off into the sunset. Firstly I would look to the position of Uranus and to a lesser extent Saturn.

Like this: Planets in Late Degrees — What Do They Mean? August 15, 2008 at 8:38 pm Sometimes I refer to planets that are at the very end of a sign as having an extra oomph. 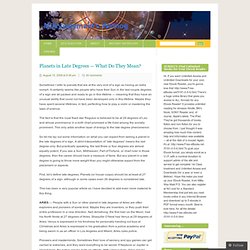 It certainly seems like people who have their Sun in the last couple degrees of a sign are all packed and ready to go in this lifetime — meaning that they have an unusual ability that could not have been developed only in this lifetime. Maybe they have spent several lifetimes, in fact, perfecting how to play a violin or mastering the laws of science. Astrology in Action - Anaretic Degree. Back The 29th degree of any sign is considered the anaretic degree. 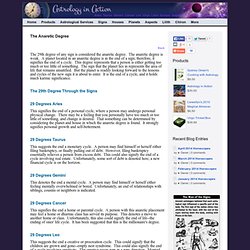 The anaretic degree is weak. A planet located in an anaretic degree is in the end of a sign; therefore, it signifies the end of a cycle. This degree represents that a person is either getting too much or too little of something. Carelli Degrees. Carelli Degrees The meaning of each of the degrees as given by Adriano Carelli in The 360 Degrees of the Zodiac 0-1 deg Aries Symbol: An armed warrior of Herculean build tilling the soil. 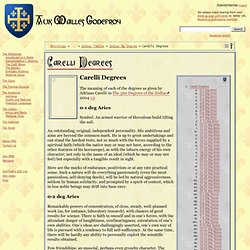 An outstanding, original, independent personality. His ambitions and aims are beyond the common mark. Here are the marks of endurance, positivism or at any rate practical sense. 0-2 deg Aries Remarkable powers of concentration, of close, steady, well-planned work (as, for instance, laboratory research), with chances of good results for science. Few friendships; an unsocial, perhaps even grouchy character. 2-3 deg Aries A great heart, inborn kindness, courage and love of peace and concord; smoothness and spontaneity; no afterthoughts or mental reservations; hospitality and broadmindedness; many true friendships; love of art. The corresponding defects will be thoughtlessness, impulsiveness, reckless decisions; an unguarded and yet violent passionateness, lack of self-control; too great a lack of inhibitions. 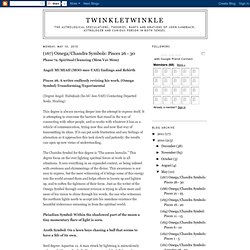 Spiritual Cleansing (Mem Vav Mem) Angel: MUMIAH (MOO-mee-YAH) Endings and Rebirth Pisces 26. A writer endlessly revising his work. (Omega Symbol) Transforming/Experimental(Degree Angel: Habuhiah (he-bU-hee-YAH) Contacting Departed Souls, Healing) This degree is always moving deeper into the attempt to express itself. Planets in Late Degrees — What Do They Mean? Critical Degrees. Critical Degrees As helpless as baby kittens are, when a stranger approaches they hiss and spit and kick up a fuss, and make a fine show of bravery. 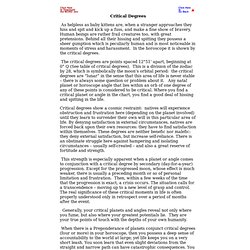 Human beings are rather frail creatures too, with great pretensions. Behind all their hissing and spitting they possess a sheer gumption which is peculiarly human and is most noticeable in moments of stress and harassment. The symbolic degrees and their interpretation. Use our application to display the meaning of the symbolic degrees you are interested in. 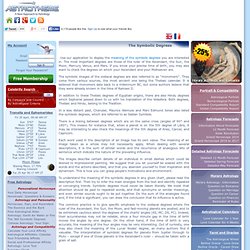 The most important degrees are those of the ruler of the Ascendant, the Sun, the Moon, Mercury, Venus, and Mars. If you know your precise time of birth, you may also want to check the degrees on which your Ascendant and your Midheaven are. The symbolic images of the zodiacal degrees are also referred to as "monomeric". They come from various sources, the most ancient one being the Thebaic calendar. It is believed that monomers date back to a millennium BC, but some authors believe that they were already known in the time of Ramses II. 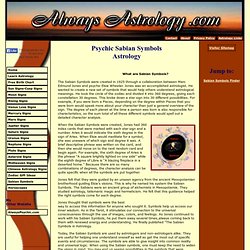 The Sabian Symbols were created in 1925 through a collaboration between Marc Edmund Jones and psychic Elsie Wheeler. Jones was an accomplished astrologist. He wanted to create a new set of symbols that would help others understand astrological meanings. He took the circle of the zodiac and divided it into 360 degrees, giving each constellation 30 degrees. This broke down a star sign into 30 different possibilities. When the Sabian Symbols were created, Jones had 360 index cards that were marked with each star sign and a number.

Jones felt that they were guided by an unseen agency from the ancient Mesopotamian brotherhood guiding Elsie's visions. Jones thought that symbols were the best way to access this information for anyone who sought it. Today, the Sabian Symbols are used by astrologers and non-astrologers alike. Look up any symbol using the Sabian Symbol Finder below. Explore the Star Signs Explore Astrology Signs in your Birth Chart - Home. THE INTERPRETATION OF A HOROSCOPE. By Marc Edmund Jones. Sabian Symbols from Sagittarius. Inside Degrees, by Ellias Lonsdale. Note: I've noticed a lot of people linking here. I do not own the rights to this book. I originally made this page a long time ago to easily share these degree symbols with my friends online. If you like this book, please support the author by buying it. It is still in print, and under $15 on Amazon.

Inside Degrees Developing Your Soul Biography Using the Chandra Symbols Ellias Lonsdale In much the same way in which he characterized planets and asteroids as powerful, gendered beings in Inside Planets, Ellias Lonsdale gives new depth and nuance to degree analysis, an area often seen as technical or reduced to cliche.