Religion and Science by Bertrand Russell

A generation earlier, Virginia Woolf contemplated how this insertion engenders the astonishing elasticity of time; a generation later, Patti Smith pondered the subjectivity of how we experience time’s continuous flow. These reflections, once so radical and now so woven into the cultural fabric, wouldn’t have been possible without a fateful conversation that took place on April 6, 1922, which steered the course of twentieth-century science and shaped our experience of time. NPR Choice page. Canales, J.: The Physicist and the Philosopher: Einstein, Bergson, and the Debate That Changed Our Understanding of Time (Paperback and Ebook) On April 6, 1922, in Paris, Albert Einstein and Henri Bergson publicly debated the nature of time. 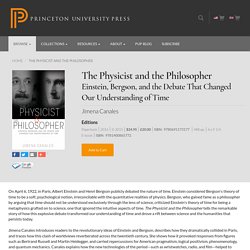 Einstein considered Bergson's theory of time to be a soft, psychological notion, irreconcilable with the quantitative realities of physics. Bergson, who gained fame as a philosopher by arguing that time should not be understood exclusively through the lens of science, criticized Einstein's theory of time for being a metaphysics grafted on to science, one that ignored the intuitive aspects of time. The Physicist and the Philosopher tells the remarkable story of how this explosive debate transformed our understanding of time and drove a rift between science and the humanities that persists today.

Jimena Canales introduces readers to the revolutionary ideas of Einstein and Bergson, describes how they dramatically collided in Paris, and traces how this clash of worldviews reverberated across the twentieth century. Jimena Canales holds the Thomas M. Albert Einstein and Henri Bergson’s Great Showdown About the Nature of Time. On April 6, 1922, Einstein met a man he would never forget. 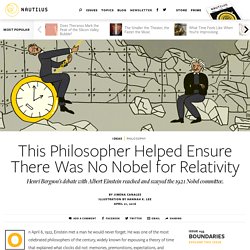 He was one of the most celebrated philosophers of the century, widely known for espousing a theory of time that explained what clocks did not: memories, premonitions, expectations, and anticipations. Thanks to him, we now know that to act on the future one needs to start by changing the past. Why does one thing not always lead to the next? The meeting had been planned as a cordial and scholarly event. It was anything but that. The philosopher’s name was Henri Bergson. 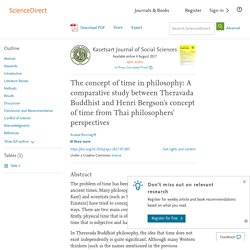 Many philosophers (such as Plato, Aristotle, and Kant) and scientists (such as Sir Isaac Newton and Albert Einstein) have tried to conceptualize and analyze time in many aspects. Henri Bergson. 1. 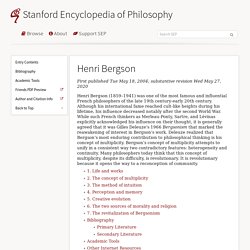 Life and works Bergson was born in Paris on October 18, 1859; he was the second of seven children of a Polish Father and English mother; both of his parents were Jewish. Bergson was a notably exceptional pupil throughout his childhood. Duration. Henri Bergson. Henri Bergson Henri Bergson's doctoral thesis was published in France in 1889, and much later translated into English (1910) under the title Time and Free Will. 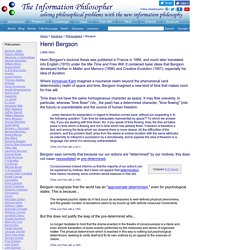 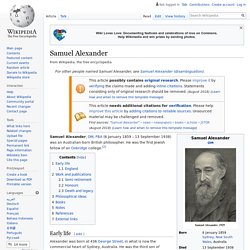 He was the first Jewish fellow of an Oxbridge college.[2] Early life[edit] Alexander was born at 436 George Street, in what is now the commercial heart of Sydney, Australia. He was the third son of Samuel Alexander, a prosperous saddler, and Eliza née Sloman. Science, Baseball, and Cosmic Purpose – Wonderfest – Bay Area Beacon of Science. Dear Wonderfest friends, A simple confession: I don’t know the purpose of life. 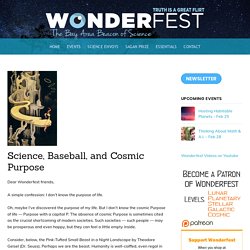 Oh, maybe I’ve discovered the purpose of my life. But I don’t know the cosmic Purpose of life — Purpose with a capital P. The absence of cosmic Purpose is sometimes cited as the crucial shortcoming of modern societies. Such societies — such people — may be prosperous and even happy, but they can feel a little empty inside. Definition of Cosmic by Merriam-Webster.

COSMIC PURPOSE AND THE CONTINGENCY OF HUMAN EVOLUTION - McMullin - 2013 - Zygon&#174; Some understand the evolutionary process as more or less predictable; others stress its contingency. 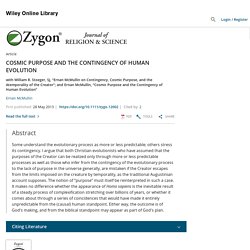 I argue that both Christian evolutionists who have assumed that the purposes of the Creator can be realized only through more or less predictable processes as well as those who infer from the contingency of the evolutionary process to the lack of purpose in the universe generally, are mistaken if the Creator escapes from the limits imposed on the creature by temporality, as the traditional Augustinian account supposes. The notion of “purpose” must itself be reinterpreted in such a case. The purpose of life, from a cosmic perspective – Michael Marvosh. The universe is dying. 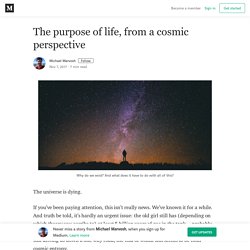 If you’ve been paying attention, this isn’t really news. We’ve known it for a while. And truth be told, it’s hardly an urgent issue: the old girl still has (depending on which theory you ascribe to) at least 5 billion years of gas in the tank — probably quite a few billions more. Cosmic Purpose. Science and the Quest for Cosmic Purpose. Can we any longer think of the universe as purposeful? 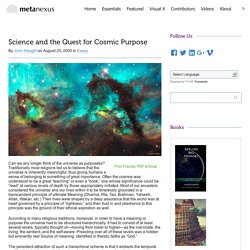 Traditionally most religions led us to believe that the universe is inherently meaningful, thus giving humans a sense of belonging to something of great importance. Often the cosmos was understood to be a great “teaching” or even a “book,” one whose significance could be “read” at various levels of depth by those appropriately initiated. Cosmic Purpose - Toyohiko Kagawa. 02698595.2014. In recent years, many philosophers of science have attempted to articulate a theory of non-epistemic emergence that is compatible with mechanistic explanation and incompatible with reductionism. The 2005 account of Fred C.

Ontological Approaches to Emergence Other Issues. “Emergence” and the Soul. Philosopher Tim O’Connor at Indiana University has a fine essay that asks, “Do We Have Souls?” He answers in the affirmative, and he provides insightful critiques of materialism and Cartesian dualism. On Cartesian dualism: Descartes [argued] a softened variant of Plato’s mind-body dualism. The material world ultimately consists in material particles wholly governed by mechanical laws of motion. The human soul is an immaterial substance, but (departing from Plato) its existence and proper functioning intimately depends, causally, on the healthy functioning of the brain. Emergence. Emergent Properties. Emergence. If we were pressed to give a definition of emergence, we could say that a property is emergent if it is a novel property of a system or an entity that arises when that system or entity has reached a certain level of complexity and that, even though it exists only insofar as the system or entity exists, it is distinct from the properties of the parts of the system from which it emerges.

However, as will become apparent, things are not so simple because “emergence” is a term used in different ways both in science and in philosophy, and how it is to be defined is a substantive question in itself. The term “emergence” comes from the Latin verb emergo which means to arise, to rise up, to come up or to come forth. The term was coined by G. H. Lewes in Problems of Life and Mind (1875) who drew the distinction between emergent and resultant effects. Table of Contents 1. A. Emergence Theory Overview – Quantum Gravity Research. Emergence Theory. Emergence. Parmenides. Parmenides. Henri Bergson. Henri Bergson. Book of Nature. The Book of Nature is a religious and philosophical concept originating in the Latin Middle Ages which views nature as a book to be read for knowledge and understanding.

There also was a book written by Conrad of Megenberg in the 14th century with the original German title of "Buch der Natur".[1] Early theologians[who?] Book of Nature. Isaac Newton. Influential British physicist and mathematician Sir Isaac Newton PRS (25 December 1642 – 20 March 1726/27[a]) was an English mathematician, physicist, astronomer, theologian, and author (described in his own day as a "natural philosopher") who is widely recognised as one of the most influential scientists of all time and as a key figure in the scientific revolution. His book Philosophiæ Naturalis Principia Mathematica (Mathematical Principles of Natural Philosophy), first published in 1687, laid the foundations of classical mechanics. Newton also made seminal contributions to optics, and shares credit with Gottfried Wilhelm Leibniz for developing the infinitesimal calculus.