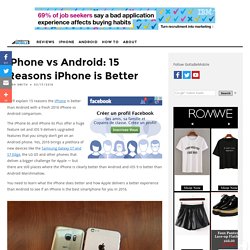 The iPhone 6s and iPhone 6s Plus offer a huge feature set and iOS 9 delivers upgraded features that you simply don’t get on an Android phone. Yes, 2016 brings a plethora of new devices like the Samsung Galaxy S7 and S7 Edge, the LG G5 and other phones that deliver a bigger challenge for Apple — but there are still places where the iPhone is clearly better than Android and iOS 9 is better than Android Marshmallow. You need to learn what the iPhone does better and how Apple delivers a better experience than Android to see if an iPhone is the best smartphone for you in 2016. Here are 15 reasons the iPhone is better than Android phones in 2016. Use our list of reasons the iPhone is better than Android to figure out which new smartphone you should buy this year. Read: Siri Tips & Tricks iPhone Apps Are First and Better Looking Read: Best iPhone Apps Fast iPhone Updates for All Bestseller All. iOS vs Android: iPhones more efficient than Android devices. Mumbai: Amid the long-term battle for supremacy between iPhones and Android-based devices, a new study has pointed out that the later is more susceptible to OS errors and crashes in comparison to Apple’s devices. 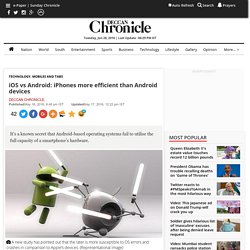 It’s a known secret that Android-based operating systems fail to utilise the full capacity of a smartphone’s hardware unlike Apple’s iPhone or iPad. Not only from a personal perspective but researchers and technology experts have also reinforced the aforementioned fact. For example, An Android smartphone with 2GB RAM and a decent SoC fails to offer the level of smoothness offered by an Apple device with lower specs. The iPhone 5s with only 1GB RAM is far better than most mid-ranged devices in terms of performance, all due Apple’s heavy focus on optimisation rather than aiming at offering more specs.

Android devices face greater risks This essentially means that approximately one in two handsets stand the risk of crashing which is a lot twice as much as Apple’s 1:4 crashing ratio. Forbes Welcome. Android is eating Apple's iOS market share everywhere. As if Apple wasn’t facing enough headwind this year, now comes word that Android smartphones are making big market share gains around the world. 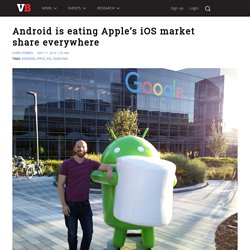 According to the latest market share numbers for the first quarter of 2016 (from Kantar Worldpanel ComTech) Android grew significantly in the U.S., Europe, and China as Apple’s iOS lost ground. In the top five European markets (U.K., France, Germany, Italy, and Spain), Android’s market share increased to 75.6 percent, up 7.1 percent compared to the same period a year ago. Android grabbed 65.5 percent in the U.S, up 7.3 percent from the previous year.

And in major Chinese urban areas, Android phones had 77 percent market share, up 6 percent from a year ago. The numbers reflect the growing competition Apple is facing from the proliferation of smartphone brands that offer low-cost Android-based gadgets with a strong set of features. iOS vs Android: Who wins the mobile OS war in 2015? Android vs. iOS: In-Depth Comparison. You’re in the market for a new smartphone (maybe your first smartphone), but which digital horse should you put your money behind? 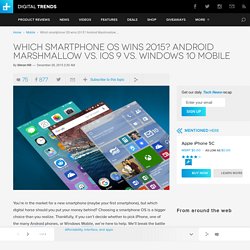 Choosing a smartphone OS is a bigger choice than you realize. Thankfully, if you can’t decide whether to pick iPhone, one of the many Android phones, or Windows Mobile, we’re here to help. We’ll break the battle down into categories and find a winner for each. Just pick what matters most to you, count up the wins in those categories, and you have a recommendation. Affordability Winner: Android Apple doesn’t make budget devices, and the latest iPhone is always among the most expensive handsets on the market, costing $200 with a two-year contract and $650 without.

Microsoft’s main hardware partner Nokia (which it now owns) was always good at producing quality hardware at relatively low prices. For sheer scale and variety nothing competes with Android. Interface Winner: Tie After a major redesign in iOS 7, Apple’s platform is bright and modern-feeling. Apps. iPhone vs. Android: Which is better? Android vs iOS market share for 2016. Smartphones using Firefox OS, Sailfish OS, or Ubuntu OS are generally available but purchasing them may not be an easy task. 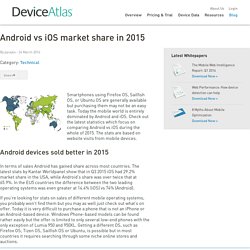 Today the mobile world is entirely dominated by Android and iOS. Check out the latest statistics which focus on comparing Android vs iOS during the whole of 2015. The stats are based on website visits from mobile devices.