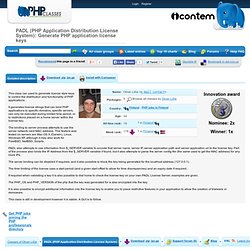 It generates license strings that can bind PHP applications to specific domains, specific servers, can only be executed during limited time period, or to restrictions placed on a home server within the license key. The binding to server process attempts to use the server network card MAC address. This feature was tested on servers are Mac OS X (Darwin), Linux, Windows XP, although it may also work for FreeBSD, NetBSD, Solaris. PADL also attempts to use information from $_SERVER variable to encode that server name, server IP, server application path and server application url to the license key. Part of the process also binds the IP Address from the $_SERVER variable if found, but it also attempts to parse the server config file (the same used to get the MAC address) for any more IPs. This class is still in development however it is stable. GNU General Public License. The GNU General Public License (GNU GPL or GPL) is the most widely used[5] free software license, which guarantees end users (individuals, organizations, companies) the freedoms to use, study, share (copy), and modify the software. 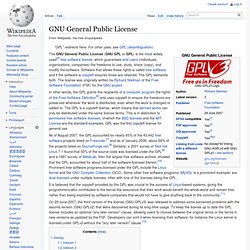 Software that allows these rights is called free software and if the software is copyleft ensures those are retained. The GPL demands both. The license was originally written by Richard Stallman of the Free Software Foundation (FSF) for the GNU project. In other words, the GPL grants the recipients of a computer program the rights of the Free Software Definition[6] and uses copyleft to ensure the freedoms are preserved whenever the work is distributed, even when the work is changed or added to. The GPL is a copyleft license, which means that derived works can only be distributed under the same license terms.

History[edit] The GPL was written by Richard Stallman in 1989 for use with programs released as part of the GNU project. Version 1[edit] Version 2[edit] License manager. A software license manager is a software management tool used by Independent software vendors or by end-user organizations to control where and how software products are able to run. 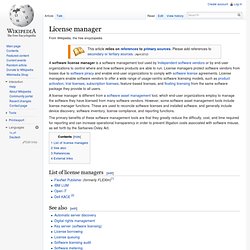