NASA's EmDrive Leader Has a New Interstellar Project. NASA Advanced Innovations funding for propellantless propulsion and more. ‘Impossible’ Quantum Space Engine Actually Works – NASA Test Suggests. What Would it Take to Build the Warp Drive From "Star Trek"? Could StarTram Revolutionize Space Travel? While stuck in traffic in 1961, James Powell, a young researcher at Brookhaven National Laboratory came up with the idea of using powerful magnets to lift and propel massive passenger-carrying cars. 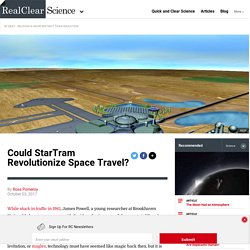 Over the next seven years, he and his colleague Gordon Danby spent their spare time piecing together a concept. New NASA Contract Will Advance Nuclear Thermal Propulsion Technology. Guiding TDM to Success is 'All a Matter of Balance' Note: Technology Demonstration Missions "Bridge Builders" are team members at NASA centers and partner organizations who help take cutting-edge technologies from concept to flight readiness -- bridging the gap to enable rewarding new space missions. 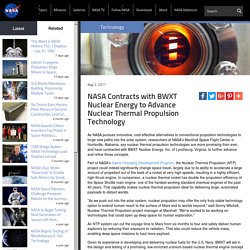 For much of his quarter-century career in the nation's space program, Steve Jurczyk, associate administrator for NASA's Space Technology Mission Directorate, has championed the use of cutting-edge technology to advance exploration and extend human knowledge. Whether executing some of NASA's most prestigious exploration missions or leading the agency's first field center, he's been a staunch advocate for the application of well-developed, mature technology to answer any challenge, overcome any obstacle. 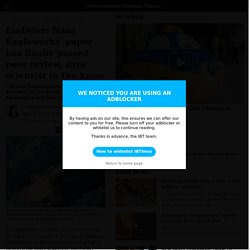 To continue reading, please turn off your ad blocker or whitelist us. An independent scientist has confirmed that the paper by scientists at the Nasa Eagleworks Laboratories on achieving thrust using highly controversial space propulsion technology EmDrive has passed peer review, and will soon be published by the American Institute of Aeronautics and Astronautics (AIAA). NASA funds Experimental Demonstration of Plasmonic Force Propulsion.

One of NASA’s strategic goals is expanding scientific understanding of the Earth and the universe. 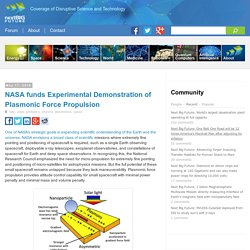 NASA envisions a broad class of scientific missions where extremely fine pointing and positioning of spacecraft is required, such as a single Earth observing spacecraft, deployable x-ray telescopes, exoplanet observatories, and constellations of spacecraft for Earth and deep space observations. Directed Energy laser pushed sail study. Philip Lubin, University of California, Santa Barbara, proposes to expand their investigations started in their NIAC Phase I of using directed energy to allow the achievement of relativistic flight to pave the way to the first interstellar missions. All of the current conventional propulsion systems are incapable of reaching the high speeds necessary to enable interstellar flight. Directed energy offers a path forward that, while difficult, is feasible. Explicit cookie consent. SPACEX and Blue Origin, two American space companies, can now return their rockets to Earth and reuse them, which promises to reduce the cost of launches. 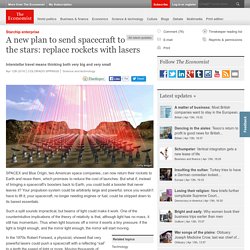 Spacex upgraded the Merlin Rocket Engines. In 2015, SpaceX made a number of modifications to the existing Falcon 9 v1.1. The new rocket was known internally as Falcon 9 v1.1 Full Thrust, and is also known as Falcon 9 v1.2, Enhanced Falcon 9, and Full-Performance Falcon 9. A principal objective of the new design was to facilitate booster reusability for a larger range of missions, including delivery of large commsats to geosynchronous orbit. Positron Dynamics plans to fly an antimatter powered cubsat by 2019. In 2013, Positron Dynamics had seed funding from Paypal billionaire Peter Thiel’s Breakout Labs. 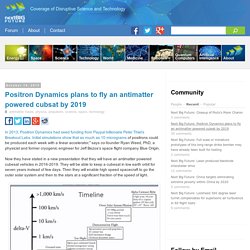 Initial simulations show that as much as 10 micrograms of positrons could be produced each week with a linear accelerator," says co-founder Ryan Weed, PhD, a physicist and former cryogenic engineer for Jeff Bezos’s space flight company Blue Origin. Now they have stated in a new presentation that they will have an antimatter powered cubesat vehicles in 2016-2019. They will be able to keep a cubesat in low earth orbit for seven years instead of few days. Then they will enable high speed spacecraft to go the outer solar system and then to the stars at a significant fraction of the speed of light. 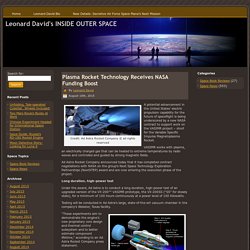 VASIMR works with plasma, an electrically charged gas that can be heated to extreme temperatures by radio waves and controlled and guided by strong magnetic fields. Ad Astra Rocket Company announced today that it has completed contract negotiations with NASA on the group’s Next Space Technology Exploration Partnerships (NextSTEP) award and are now entering the execution phase of the project. Startup Makes Progress in Beamed Propulsion for Reusable Launch Vehicles. German scientists confirm NASA results of propellantless 'impossible' EM drive - Houston Space news. Hacked Magazine reported on Monday that a group of German scientists believe that they have confirmed that the EM Drive, the propulsion device that uses microwaves rather than rocket fuel, provides thrust. 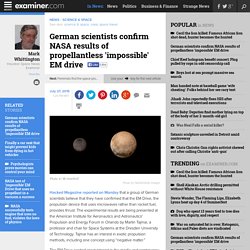 The experimental results are being presented at the American Institute for Aeronautics and Astronautics' Propulsion and Energy Forum in Orlando by Martin Tajmar, a professor and chair for Space Systems at the Dresden University of Technology. Tajmar has an interest in exotic propulsion methods, including one concept using “negative matter.” The EM Drive excited great interest in the media and controversy in the scientific community when NASA’s Eagleworks, a lab located at the Johnson Spaceflight Center in Houston led by Dr. Harold “Sonny” White, began to get positive experimental results from a test article. NASA Reveals Latest Warp-Drive Ship Designs. Look at the picture above. Nope, it’s not a snapshot of a Star Wars scene, or any other sci-fi movie.

Researchers at NASA's Johnson Space Center in Houston have found that a microwave thruster system that requires no propellant does indeed generate a small amount of thrust, Wired UK reported Thursday (July 31). If the technology pans out, it could make spaceflight far cheaper and speedier, potentially opening up much of the cosmos to exploration, advocates say. "Test results indicate that the RF [radio frequency] resonant cavity thruster design, which is unique as an electric propulsion device, is producing a force that is not attributable to any classical electromagnetic phenomenon and, therefore, is potentially demonstrating an interaction with the quantum vacuum virtual plasma," the NASA team wrote in their study, which they presented Wednesday (July 30) at the 50th Joint Propulsion Conference in Cleveland. [Superfast Spacecraft Propulsion Concepts (Images)] Warp drive looks more promising than ever in recent NASA studies.

"Interstellar travel may still be in its infancy, but adulthood is fast approaching, and our descendants will someday see childhood's end. " The Starflight Handbook The first steps towards interstellar travel have been taken, but the stars are very far away. NASA Is Developing A Faster-Than-Light Warp Drive. NASA Making the "Warp Drive" - Faster than Light Spaceship. NASA scientists are all set to challenge the light speed barrier. NASA’s new ion engine is already in space and could someday be used on a mission to Mars. The NASA spacecraft Dawn has spent more than seven years traveling across the solar system to intercept the asteroid Vesta and the dwarf planet Ceres.

US Air Force confirms hypersonic SABRE engine is feasible. An analysis undertaken by the United States’ Air Force Research Laboratory (‘AFRL’) has confirmed the feasibility of the Reaction Engines Synergetic Air-Breathing Rocket Engine (‘SABRE’) engine cycle concept. Nextbigfuture had an interview by Sander Olson with Richard Varvill, the Technical Director and Chief Designer at Reaction Engines Limited back in 2009. New Propulsion System could Revolutionize Space Travel. NASA has announced that an experimental propulsion system that needs only energy from sunlight appears to produce sufficient thrust to power spacecraft. This means that, once a spacecraft is in orbit, it will be able to accelerate away from the earth to the edges of the solar system, without fuel.

NASA gives the go-ahead to the world's most powerful rocket.