Scientists move one step closer to turning water into hydrogen fuel, affordably. Scientists have cleared one hurdle on the path to deriving hydrogen fuel from water affordably, a breakthrough that could drastically change the way we power vehicles. 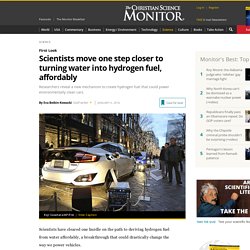 Hydrogen has the potential to fuel incredibly environmentally clean cars. But making that fuel hasn't been so efficient or economical. Pure hydrogen gas does not occur naturally on Earth, so scientists must devise ways to separate hydrogen from naturally occurring compounds, like H2 O. Until now, cars that run on water have been out of reach. Electrolysis, the process of breaking H2 O into hydrogen and oxygen gases by passing an electric current through water, and other possible methods have been prohibitively expensive or difficult. But a team of scientists have come up with a different mechanism to produce hydrogen fuel from water. The biomaterial, called P22-Hyd, is made up of a modified enzyme, hydrogenase, protected within the protein shell of a bacterial virus. The mechanism goes both ways. Unlimited Free Energy Here Now! Three Devices Tested and Verified! (Before It's News) Glenn Canady (Friend me!) 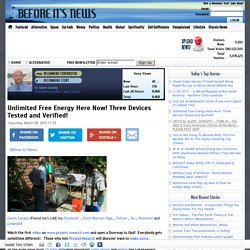 LIKE my Facebook , Truth Warriors Page , Twitter , Tsu , Pinterest and LinkedIn! Watch the first video on www.project.nsearch.com and open a Doorway to God! Everybody gets something different! A Potentially Cheap Way to Store Solar. If solar power is to become a primary source of electricity around the world, we’ll need cheap ways to store energy from the sun when it isn’t shining. 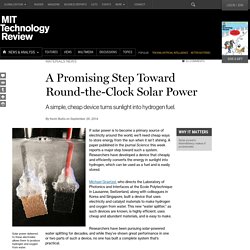 A paper published in the journal Science this week reports a major step toward such a system. Researchers have developed a device that cheaply and efficiently converts the energy in sunlight into hydrogen, which can be used as a fuel and is easily stored. Michael Graetzel, who directs the Laboratory of Photonics and Interfaces at the Ecole Polytechnique in Lausanne, Switzerland, along with colleagues in Korea and Singapore, built a device that uses electricity and catalyst materials to make hydrogen and oxygen from water.

This new “water splitter,” as such devices are known, is highly efficient, uses cheap and abundant materials, and is easy to make. The catalysts built on previous work showing that nickel hydroxide is a promising catalyst, and that adding iron could improve it. More work is needed before the device can be practical. A Potentially Cheap Way to Store Solar. Chemists develop technology to produce clean-burning hydrogen fuel. Rutgers researchers have developed a technology that could overcome a major cost barrier to make clean-burning hydrogen fuel – a fuel that could replace expensive and environmentally harmful fossil fuels. 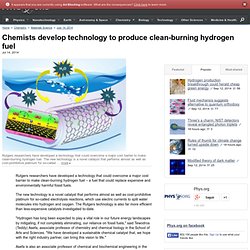 The new technology is a novel catalyst that performs almost as well as cost-prohibitive platinum for so-called electrolysis reactions, which use electric currents to split water molecules into hydrogen and oxygen. The Rutgers technology is also far more efficient than less-expensive catalysts investigated to-date. "Hydrogen has long been expected to play a vital role in our future energy landscapes by mitigating, if not completely eliminating, our reliance on fossil fuels," said Tewodros (Teddy) Asefa, associate professor of chemistry and chemical biology in the School of Arts and Sciences. "We have developed a sustainable chemical catalyst that, we hope with the right industry partner, can bring this vision to life. 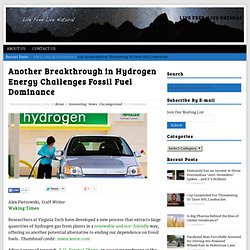 Thumbnail credit: zmescience.com After 7 years of research, Y.H. Percival Zhang, an associate professor at the College of Agriculture and Life Sciences and the College of Engineering at Virginia Tech, and his team have developed a new method of using customized enzymes to produce high quantities of hydrogen out of xylose, a simple sugar present in plants. Zhang and his team have succeeded in using xylose, the most abundant simple plant sugar, to produce a large quantity of hydrogen that previously was attainable only in theory. Hydrogen fuel has the potential to dramatically revolutionize the automobile market and reduce our dependence on fossil fuels. Source: U.S. About the Author Sources: Hydrogen breakthrough could be a game-changer for the future of car fuels. UK researchers today announced what they believe to be a game changer in the use of hydrogen as a "green" fuel. 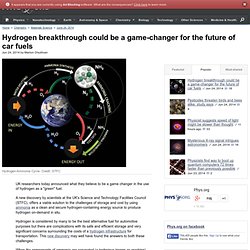 A new discovery by scientists at the UK's Science and Technology Facilities Council (STFC), offers a viable solution to the challenges of storage and cost by using ammonia as a clean and secure hydrogen-containing energy source to produce hydrogen on-demand in situ. Hydrogen is considered by many to be the best alternative fuel for automotive purposes but there are complications with its safe and efficient storage and very significant concerns surrounding the costs of a hydrogen infrastructure for transportation. This new discovery may well have found the answers to both these challenges. When the components of ammonia are separated (a technique known as cracking) they form one part nitrogen and three parts hydrogen. Many catalysts can effectively crack ammonia to release the hydrogen, but the best ones are very expensive precious metals.