Stop Testing Software on Your PC: Use Virtual Machine Snapshots Instead. We’ve long railed against registry cleaners and system tuners as useless products that waste your money, but how do you go about cleaning up after uninstalling shady freeware? 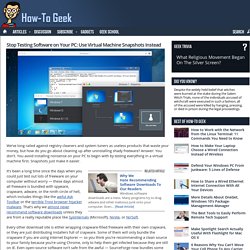 Answer: You don’t. You avoid installing nonsense on your PC to begin with by testing everything in a virtual machine first. Snapshots just make it easier. It’s been a long time since the days when you could just test out lots of freeware on your computer without worry — these days almost all freeware is bundled with spyware, crapware, adware, or the ninth circle of hell, which includes things like the awful Ask Toolbar or the terrible Trovi browser hijacker malware. Motherboard Port Guide: Solving Your Connector Mystery. If you've ever opened a PC case and stared inside, or looked at a bare motherboard, you may be taken aback by the number and variety of connectors, pins, and slots that exist on a modern PC motherboard. 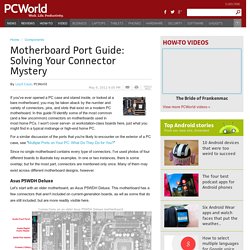 In this guide I'll identify some of the most common (and a few uncommon) connectors on motherboards used in most home PCs. I won't cover server- or workstation-class boards here, just what you might find in a typical midrange or high-end home PC. For a similar discussion of the ports that you're likely to encounter on the exterior of a PC case, see "Multiple Ports on Your PC: What Do They Do for You? " Since no single motherboard contains every type of connectors, I've used photos of four different boards to illustrate key examples. In one or two instances, there is some overlap; but for the most part, connectors are mentioned only once. Asus P5WDH Deluxe Let's start with an older motherboard, an Asus P5WDH Deluxe.

Intel DP67BG Next: Motherboards for AMD CPUs and for the Intel Z77 chipset. 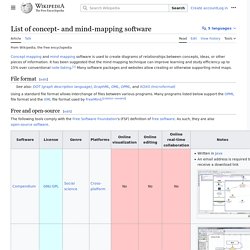 It has been suggested that the mind mapping technique can improve learning/study efficiency up to 15% over conventional note taking.[1] There are a number of software packages and websites that allow the creation of, or otherwise support mind maps. File format[edit] Using a standard file format allows interchange of files between various programs. Many of the programs listed below support the mm format used by FreeMind. The mm format is an XML text format consisting of tagged objects. Free Software[edit] The following tools are free as defined by the Free Software Foundation. Freeware[edit] The following is a list of notable concept mapping and mind mapping applications which are freeware (they are available at no cost). 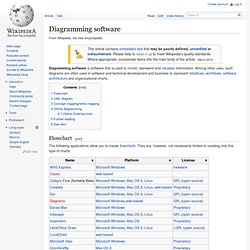 Among other uses, such diagrams are often used in software and technical development and business to represent dataflows, workflows, software architecture and organizational charts. Flowchart[edit] The following applications allow you to create flowcharts. They are, however, not necessarily limited to creating only this type of charts. Why is my card-to-computer transfer so slow? - Photo.net Nikon Forum. Robert Banks , May 26, 2013; 07:40 p.m. 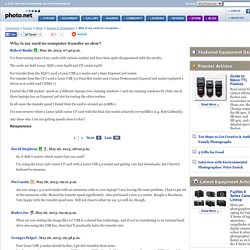 I've been testing some of my cards with various readers and have been quite disappointed with the results. The cards are both Lexar: XQD 1100x 64Gb and CF 1000x 64Gb. For transfer from the XQD I used a Lexar USB 3.0 reader and a Sony ExpressCard reader. For transfer from the CF I used a Lexar USB 3.0 Dual Slot reader and a Lexar Professional ExpressCard reader (updated a driver so it could read UDMA 7). I tested the USB readers' speed on 3 different laptops (two running windows 7 and one running windows 8). In all cases the transfer speed I found from the card is around 40-50MB/s. I've seen reviews where a Lexar 32Gb 1000x CF card with the dual slot reader achieved over 90MB/s (e.g. Raspberry Pi Learning Resources. This learning resource describes a practical exercise where the Raspberry Pi is used to demonstrate Dynamic Host Configuration Protocol on an isolated network. 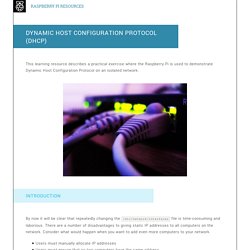 Introduction By now it will be clear that repeatedly changing the /etc/network/interfaces file is time-consuming and laborious. There are a number of disadvantages to giving static IP addresses to all computers on the network. Consider what would happen when you want to add even more computers to your network. Users must manually allocate IP addressesUsers must ensure that no two computers have the same addressIt is time-consuming to edit the configuration file on every computerIt is not ideal for mobile devices like laptops, which frequently join and leave the network How can we make this easier? Learning objectives Understand what Dynamic Host Configuration Protocol (DHCP) isKnow the role it plays in the overall structure of a computer network. Pi Quick Start Guide. What you will need Required SD CardWe recommend an 8GB class 4 SD card – ideally preinstalled with NOOBS. 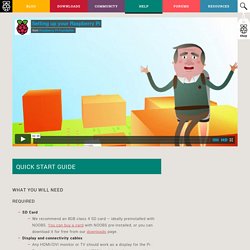 You can buy a card with NOOBS pre-installed, or you can download it for free from our downloads page.Display and connectivity cablesAny HDMI/DVI monitor or TV should work as a display for the Pi . For best results, use one with HDMI input, but other connections are available for older devices. Use a standard Ethernet cable for internet access.Keyboard and mouseAny standard USB keyboard and mouse will work with your Raspberry Pi.Power supplyUse a 5V micro USB power supply to power your Raspberry Pi. Not essential but helpful to have Internet connectionTo update or download software, we recommend that you connect your Raspberry Pi to the internet either via and ethernet cable or a wifi adapter.HeadphonesHeadphones or earphones with a 3.5mm jack will work with your Raspberry Pi.