Period pain can be “as bad as a heart attack.” So why aren’t we researching how to treat it? It was the cold, slushy week in Manhattan after late January’s blizzard and Chloe was dolefully eyeing the darkened studio where she awaited her call time. 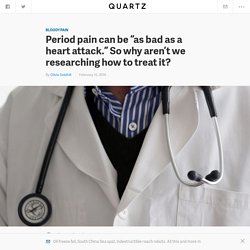 She wore a rose-colored cashmere sweater, a bridesmaid gift from a New York society wedding weeks earlier. “I didn’t even say hi!” An assistant exclaimed, running up to Chloe’s side. “Hi, Chloe! Chloe, I follow you so much on Instagram!” Chloe has 115,000 followers on Instagram. Since the days of Lassie and Spuds MacKenzie, there have been famous non-human actors and models. Animals at the very highest echelons of fame have NFL-size entourages. Hillary Clinton once wrote an op-ed for Quartz.

Even pets with relatively middling-sized followings have access to opportunities human fame-seekers would envy: product lines, endorsements, guest appearances, and endless freebies. In some cases they are actually supplanting human equivalents. Many NFL Players Are Obese, Based On Their BMI. Sylvester Williams, a Denver Broncos nose guard, nabs Isaiah Crowell of the Cleveland Browns last October. 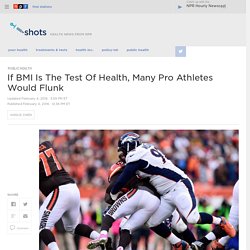 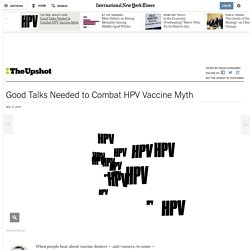 But there’s another type of vaccine refusal, and it’s important that we not ignore that. Doctors sometimes promote the use of some vaccines with less enthusiasm than others. Sometimes, they don’t talk about them at all. This occurs most often with the , or HPV, vaccine. HPV is a sexually transmitted infection that is very, very common, so much so that almost all sexually active people will get at least one of more than 40 types at some point in their lives. Most people don’t suffer any real negative health consequences. This is preventable. Let’s also be clear. Our immunization rates for HPV fall far short of other vaccine rates. Even this rate of vaccination has made a difference, though. The remarkable reduction in HPV prevalence occurs even though only about a third of girls 13 to 17 received all three doses of the vaccine in 2010. Uterus Transplants May Soon Help Some Infertile Women in the U.S. Become Pregnant.

“I crave that experience,” she said. 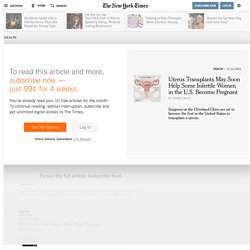 “I want the , the backaches, the feet swelling. I want to feel the baby move. That is something I’ve wanted for as long as I can remember.” She traveled more than 1,000 miles to the clinic, paying her own way. She asked that her name and hometown be withheld to protect her family’s privacy. She was 16 when medical tests, performed because she had not begun menstruating, found that she had ovaries but no uterus — a syndrome that affects about one in 4,500 newborn girls. Dr. Laying the Groundwork The hospital plans to perform the procedure 10 times, as an experiment, and then decide whether to continue. Sweden is the only country where uterine transplants have been completed successfully — all at the University of Gothenburg with a uterus from a live donor.

Two earlier attempts — one in Saudi Arabia, and one in Turkey — failed. We will inform you when the next Times report on this attempt at a uterus transplant is published. Brainiac. CONCUSSION: An Athlete Felled by Concussions, Despite Playing a ‘Safer’ Sport. Quiz: How Well Do You Know Your Liver? Skin cancer patient posts graphic selfies to show tanning bed dangers. Men's Health. Biology 120 Animations. Human Physiology Animation and Tutorial Links. Code Fred: Survival Mode. Anatomy Videos: MedlinePlus.

<span>To use the sharing features on this page, please enable JavaScript. 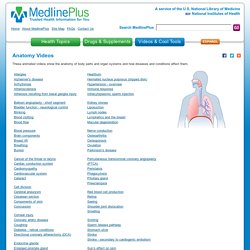 </span> These animated videos show the anatomy of body parts and organ systems and how diseases and conditions affect them. The videos play in QuickTime format. If you do not have QuickTime, you will be prompted to obtain a free download of the software before you view a video. You can download the Apple QuickTime player at: The information provided herein should not be used during any medical emergency or for the diagnosis or treatment of any medical condition.