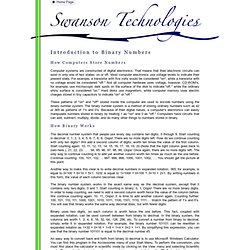 That means that their electronic circuits can exist in only one of two states: on or off. Most computer electronics use voltage levels to indicate their present state. For example, a transistor with five volts would be considered "on", while a transistor with no voltage would be considered "off. " Not all computer hardware uses voltage, however. These patterns of "on" and "off" stored inside the computer are used to encode numbers using the binary number system. The binary number system is a method of storing ordinary numbers such as 42 or 365 as patterns of 1's and 0's. How Binary Works The decimal number system that people use every day contains ten digits, 0 through 9. Another way to make this clear is to write decimal numbers in expanded notation. 365, for example, is equal to 3×100 + 6×10 + 5×1. 1032 is equal to 1×1000 + 0×100 + 3×10 + 2×1.

Not so Horrible Hexadecimal! Game. Hexadecimal Drum Machine. Create your own rhythms! 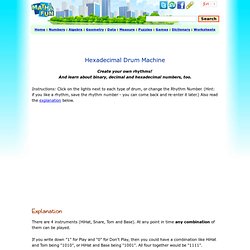 And learn about binary, decimal and hexadecimal numbers, too. Instructions: Click on the lights next to each type of drum, or change the Rhythm Number. (Hint: if you like a rhythm, save the rhythm number - you can come back and re-enter it later.) Also read the explanation below. Explanation There are 4 instruments (HiHat, Snare, Tom and Base). If you write down "1" for Play and "0" for Don't Play, then you could have a combination like HiHat and Tom being "1010", or HiHat and Base being "1001". 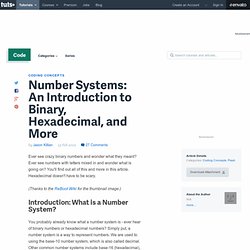 Ever see numbers with letters mixed in and wonder what is going on? You'll find out all of this and more in this article. Hexadecimal doesn't have to be scary. (Thanks to the ReBoot Wiki for the thumbnail image.) Tag binary - Test Your Knowledge. BINARY AND HEXADECIMAL. Let's learn to count... 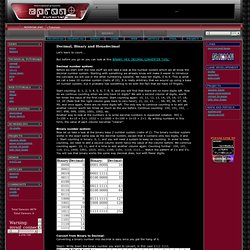 But before you go on you can look at this BINARY, HEX, DECIMAL CONVERTER TOOL! Decimal number system: Before we start with the new stuff we will take a look at the number system which we all know the decimal number system. Starting with something we already know will make it easier to introduce the concepts we will use in the other numbering systems. We have ten digits, 0 to 9. This is what we call a base 10 number system (radix of 10). Start counting: 0, 1, 2, 3, 4, 5, 6, 7, 8, 9, and you will find that there are no more digits left. Binary number system: Now let us take a look at the binary base 2 number system (radix of 2). Convert from Binary to Decimal: Converting a binary number into decimal is easy once you get the hang of it. 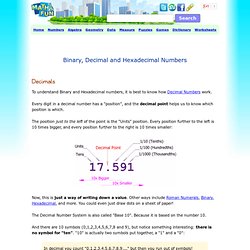 Hexadecimal Color Tutorial:1. Various alphabets with numerological values (gematria) Numeric Systems Home Page. Undefined If it weren't for this bulky title, this page would load in a good 5 seconds! 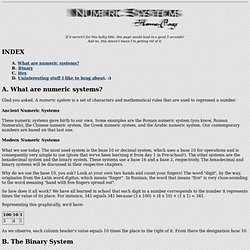 And no, this doesn't mean I'm getting rid of it. A. What are numeric systems? B. A. Glad you asked. Ancient Numeric Systems These numeric systems gave birth to our own. Modern Numeric Systems What we use today. Why do we use the base 10, you ask? So how does it all work? Representing this graphically, we'd have: As we observe, each column header's value equals 10 times the place to the right of it.

B. The binary system has a base 2, which means each column's value equals 2 times the value of the one to the right, starting with the rightmost digit, which equals 1.