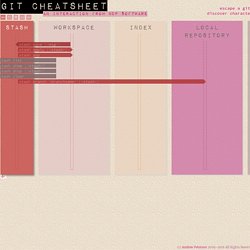 Learn to Hack. 5 Ways to Run Windows Software on a Mac. Macs have a thriving ecosystem of software, but some programs still only support Windows. 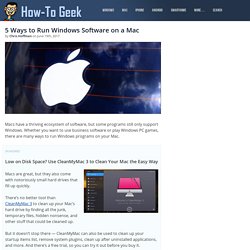 Whether you want to use business software or play Windows PC games, there are many ways to run Windows programs on your Mac. Low on Disk Space? Use CleanMyMac 3 to Clean Your Mac the Easy Way Macs are great, but they also come with notoriously small hard drives that fill up quickly. There’s no better tool than CleanMyMac 3 to clean up your Mac’s hard drive by finding all the junk, temporary files, hidden nonsense, and other stuff that could be cleaned up. But it doesn’t stop there — CleanMyMac can also be used to clean up your startup items list, remove system plugins, clean up after uninstalled applications, and more. Download CleanMyMac 3 for Free Today Virtual Machines We recommend using a virtual machine program, ideally Parallels or VMWare Fusion, to run Windows applications on a Mac without rebooting.

A virtual machine is one of the best ways to run Windows desktop software. CodePad - Quickly Conduct Coding Interviews and Phone Screen Interviews. Macos - How to switch git user at terminal? - Super User. Adding an existing project to GitHub using the command line. Putting your existing work on GitHub can let you share and collaborate in lots of great ways. 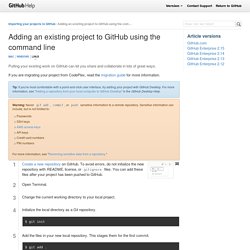 " How To Host A Website With Raspberry Pi - ReadWrite. The Project File Part 2: Schemes and Targets · Michele Titolo. Welcome to part 2 of my Project file series! 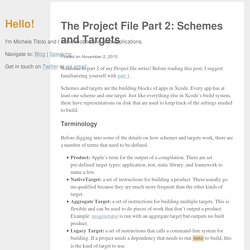 Before reading this post, I suggest familiarizing yourself with part 1. Schemes and targets are the building blocks of apps in Xcode. Every app has at least one scheme and one target. Batch file - How to run two commands in one line in Windows CMD? How do I make the vi editor display or hide line numbers? Enabling vi syntax colors - Media Temple. Overview The following guide will show you how to enable syntax colors for VI/VIM. 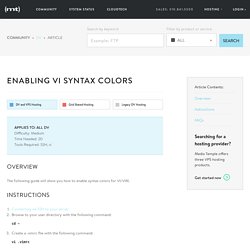 Instructions. Javascript - How to fix Error: listen EADDRINUSE while using nodejs? Shell - Calling an external command in Python. Shell - Calling an external command in Python. Multithreading - How to use threading in Python? A Simple Approach to Execute Node.js Scripts with Python - Sweetmeat. Here are two examples that demonstrate how to execute Node.js/JavaScript scripts from a Python script with standard output and standard error stream handling on either the JavaScript side or the Python side. 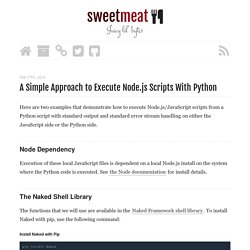 Node Dependency Execution of these local JavaScript files is dependent on a local Node.js install on the system where the Python code is executed. See the Node documentation for install details. How to Make an Alias in Mac OS X 10.9, 10.8 Terminal, Using Bash Shell. To make aliases of OSX/Unix commands in your bash shell on OS X 10.9, 10.8 and 10.7, it is done via your .bash_profile file which lives in your home account directory, if the file does not already exist, just create one. 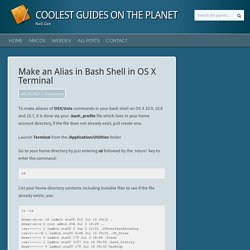 Launch Terminal from the /Application/Utilities folder Go to your home directory by just entering cd followed by the ‘return’ key to enter the command: cd. Learn to Hack. Terminal - key bindings table? - Unix & Linux Stack Exchange. Git Configuration. So far, we’ve covered the basics of how Git works and how to use it, and we’ve introduced a number of tools that Git provides to help you use it easily and efficiently. In this chapter, we’ll see how you can make Git operate in a more customized fashion, by introducing several important configuration settings and the hooks system.

With these tools, it’s easy to get Git to work exactly the way you, your company, or your group needs it to. First, a quick review: Git uses a series of configuration files to determine non-default behavior that you may want. The first place Git looks for these values is in the system-wide [path]/etc/gitconfig file, which contains settings that are applied to every user on the system and all of their repositories. Tips and Tricks.

A few of my Git tricks, tips and workflows. Note: A german translation is available here This post is based on a talk I gave at the 18th Cocoaheads Meetup Vienna (CHW018) on Feb 17th, 2011. 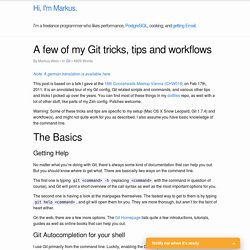 It is an annotated tour of my Git config, Git related scripts and commands, and various other tips and tricks I picked up over the years. You can find most of these things in my dotfiles repo, as well with a lot of other stuff, like parts of my Zsh config. SQLite Python Tutorial. Installation The SQLite3 can be integrated with Python using sqlite3 module which was written by Gerhard Haring. 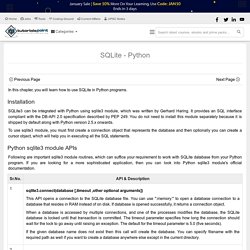 It provides an SQL interface compliant with the DB-API 2.0 specification described by PEP 249. You do not need to install this module separately because its being shipped by default along with Python version 2.5.x onwards. To use sqlite3 module, you must first create a connection object that represents the database and then optionally you can create cursor object which will help you in executing all the SQL statements. 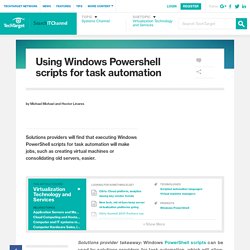 By submitting your personal information, you agree that TechTarget and its partners may contact you regarding relevant content, products and special offers. You also agree that your personal information may be transferred and processed in the United States, and that you have read and agree to the Terms of Use and the Privacy Policy. Gittutorial Documentation. Select a Language. 2. Getting Started — Selenium Python Bindings 2 documentation. 2.1. Simple Usage If you have installed Selenium Python bindings, you can start using it from Python like this. from selenium import webdriverfrom selenium.webdriver.common.keys import Keys driver = webdriver.Firefox()driver.get(" "Python" in driver.titleelem = driver.find_element_by_name("q")elem.clear()elem.send_keys("pycon")elem.send_keys(Keys.RETURN)assert "No results found.

C++ Development in Xcode. Dancing in the Debugger — A Waltz with LLDB · objc.io. Have you ever been stuck trying to understand your code and logged the contents of a variable? NSLog(@"%@", whatIsInsideThisThing); Or skipped a function call to simplify the behavior of the program? NSNumber *n = @7; // theFunctionThatShouldReallyBeCalled(); Or short-circuited a logical check? If (1 || theBooleanAtStake) { ... } Or faked the implementation of a function? LLDB Homepage. C++ Tutorial. Pad 3.7 - Draw, Create, Share! MakeAppIcon - Generate app icons of all sizes with a click!

UI Color - Convert HEX & RGB colors to UIColor. RyPress - Quality Software Tutorials. Sumo Paint. Yet another insignificant Programming Notes. GUI Programming - Java Programming Tutorial. 1. Introduction So far, we have covered most of the basic constructs of Java and introduced the important concept of Object-Oriented Programming (OOP). As discussed, OOP permits higher level of abstraction than the traditional procedural-oriented languages (such as C and Pascal). OOP lets you think in the problem space rather than the computer's bits and bytes and instruction sequences. Programming TI-84 Plus (Silver Edition) Advanced.

Programming TI-84 Plus (Silver Edition) for beginners. Web APIs. API. Top 10 Web Hosting Services. Who Didn’t Make the Cut. Dreamweaver. Facebook Developers. Dafont.com. RANDOM.ORG. Free Online HTML Editor. Use this free online HTML editor to create HTML codes for your website or blog. Real-time HTML Editor. W3Schools Stylesheets Example. Node.js. Learn how to code. Fonts. 15.1 Introduction Setting font properties will be among the most common uses of style sheets. Unfortunately, there exists no well-defined and universally accepted taxonomy for classifying fonts, and terms that apply to one font family may not be appropriate for others. E.g., 'italic' is commonly used to label slanted text, but slanted text may also be labeled as being Oblique, Slanted, Incline, Cursive or Kursiv.

Therefore it is not a simple problem to map typical font selection properties to a specific font. Colors. Abstract. Raspberry Pi. Cave of Programming. Hangouts - Getting Started - Google+ Hangouts API. Stack Overflow. Code Wars. Just as the Japanese, Spanish and French languages are uniquely different, programming languages also have their variations, some more popular and easier to use than others. With the recent introduction of some new ones, there is a ‘war’ of modern day languages. W3Schools.