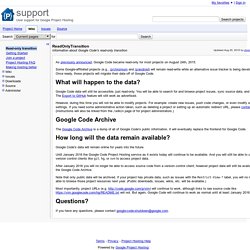 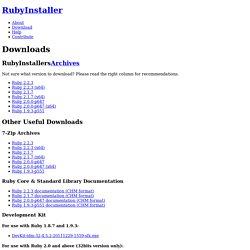 If you don’t know what version to install and you’re getting started with Ruby, we recommend you use Ruby 2.1.X installers. These provide a stable language and a extensive list of packages (gems) that are compatible and updated. However, not all packages (gems) are maintained. Some older packages may not be compatible with newer versions of Ruby and RubyInstaller.

The 64-bit versions of Ruby are relatively new on the Windows area and not all the packages have been updated to be compatible with it. Users of CPUs older than Intel’s Nocona (90nm Pentium 4) who wish to use Ruby 2.0.0 will need to build their own using a different DevKit by following these instructions. GPGTools - It's worth protecting what you love. Coolest guides on the planet. Effects (Direct3D 11) The first step is to organize the state you want to control in an effect. 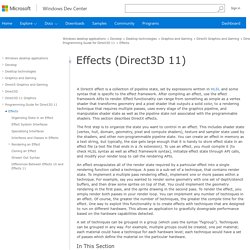 This includes shader state (vertex, hull, domain, geometry, pixel and compute shaders), texture and sampler state used by the shaders, and other non-programmable pipeline state. You can create an effect in memory as a text string, but typically, the size gets large enough that it is handy to store effect state in an effect file (a text file that ends in a .fx extension). To use an effect, you must compile it (to check HLSL syntax as well as effect framework syntax), initialize effect state through API calls, and modify your render loop to call the rendering APIs. An effect encapsulates all of the render state required by a particular effect into a single rendering function called a technique. A pass is a sub-set of a technique, that contains render state. A set of techniques can be grouped in a group (which uses the syntax "fxgroup").

In This Section Related topics. MSDN Blogs. HLSL, FXC, and D3DCompile - Games for Windows and the DirectX SDK. With the retirement of D3DX (See “Where is the DirectX SDK?” 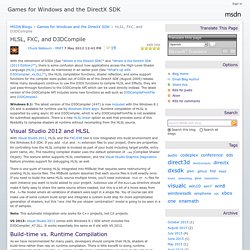 And "Where is the DirectX SDK (2013 Edition)? "), there is some confusion about how applications access the High-Level Shader Language (HLSL) compiler. As mentioned in an earlier post (See “What’s up with D3DCompiler_xx.DLL?”) , the HLSL compilation functions, shader reflection, and some support functions for the compiler were pulled out of D3DX as of the DirectX SDK (August 2009) release. While many developers continue to use the D3DX functions to compile HLSL and Effects, they are just pass-through functions to the D3DCompile API which can be used directly instead. Windows 8.1: The latest version of the D3DCompiler (#47) is now included with the Windows 8.1 OS and is available for runtime use by Windows Store apps. 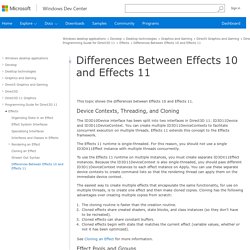 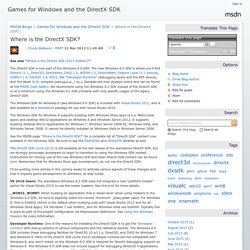 " The DirectX SDK is now part of the Windows 8.0 SDK. The new Windows 8.0 SDK is where you’ll find DirectX 11.1, Direct2D, DirectWrite, DXGI 1.2, WDDM 1.2, DirectXMath, Feature Level 11.1 devices, XINPUT 1.4, XAUDIO 2.8, WIC2, the "Developer Runtime" (debugging layers and the REF device), and the latest HLSL compiler (D3DCompiler_*.DLL). Samples are now shipped online and can be found at the MSDN Code Gallery. We recommend using the Windows 8.x SDK instead of the DirectX SDK, or at a minimum using the Windows 8.x SDK primarily with only specific usages of the legacy DirectX SDK. Effects 11 Win32 Samples in C++ for Visual Studio 2012. Getting started. Welcome to Jinja2 — Jinja2 Documentation (2.8-dev) Jinja2 is a modern and designer-friendly templating language for Python, modelled after Django’s templates. 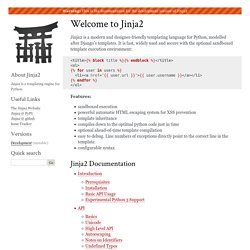 Line numbers of exceptions directly point to the correct line in the template.configurable syntax Additional Information If you can’t find the information you’re looking for, have a look at the index or try to find it using the search function: Java Tools For Mac download. XML Tutorial. Shopify Documentation. Ottoware download. JSON Helper: Example Scripts. JSON Helper. JSON Helper is an agent (or scriptable background application) which allows you to do useful things with JSON (JavaScript Object Notation) directly from AppleScript. 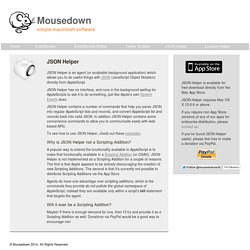 JSON Helper has no interface, and runs in the background waiting for AppleScripts to ask it to do something, just like Apple's own System Events does. JSON Helper contains a number of commands that help you parse JSON into regular AppleScript lists and records, and convert AppleScript list and records back into valid JSON. Location Helper: Example Scripts. Below is an overview of what you can do with Location Helper. 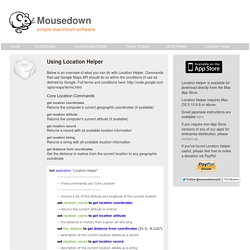 Commands that use Google Maps API should do so within the conditions of use as defined by Google. Full terms and conditions here: Core Location Commands get location coordinates Returns the computer’s current geographic coordinates (if available) Junecloud Automator Actions 3.0.1 ~ Mac OS X. These Automator actions are designed to take some of the tedium out of your work. 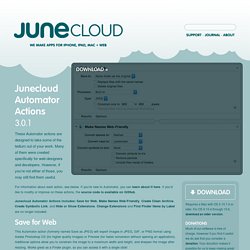 Many of them were created specifically for web designers and developers. However, if you’re not either of those, you may still find them useful. Using Automator: Scheduling Workflows, Five Automator Tips in Five Days. Automator workflows are great at saving you time by automating tasks that you'd otherwise have to do manually.

Want to become even more efficient? Try scheduling your workflows to run at night, on weekends, or while you're at lunch. In Automator, you can quickly and easily save any workflow as an iCal Alarm, to be run automatically whenever you see fit. Mac Productivity: Scheduling AppleScripts. If you're an Automator user, you probably know how to create iCal Alarm workflows, which can be set to run at scheduled times, allowing processing to occur during downtime. If you're not familiar with Automator or iCal Alarm workflows, check out some of my other tips to get acquainted... Coda Shortcuts Cheat Sheet.