IPFS is the Distributed Web. Pandoc - About pandoc. CSS Shorthand Generator. Teach Yourself TEI. Contents This page lists some generic TEI introductory readings and manuals, and also a selection of tutorial guides prepared by members of the TEI community for their own needs. 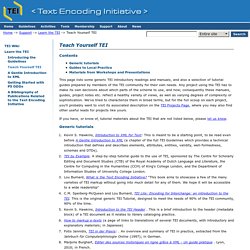 Any project using the TEI has to make its own decisions about which parts of the scheme to use, and how; consequently these manuals, guides, project notes etc. reflect a healthy variety of views, as well as varying degrees of complexity or sophistication. We've tried to characterize them in broad terms, but for the full scoop on each project, you'll probably want to visit its associated description on the TEI Projects Page, where you may also find other useful leads for projects like yours.

If you have, or know of, tutorial materials about the TEI that are not listed below, please let us know. Generic tutorials Kevin S. Guides to Local Practice Materials from Workshops and Presentations. Code Avengers: learn to code games, apps and websites. Girl Develop It. Guides - Rails Girls. HackThis!! - The Hackers Playground. GitHub · Build software better, together. The Programming Historian - 1st edition. TWiT.TV.

0.  Getting Started. When you program a computer, you have to "speak" in a language your computer understands: a programming language. 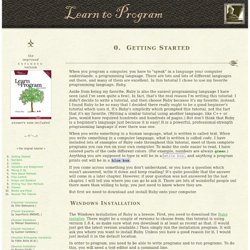 There are lots and lots of different languages out there, and many of them are excellent. In this tutorial I chose to use my favorite programming language, . Aside from being my favorite, Ruby is also the easiest programming language I have seen (and I've seen quite a few). In fact, that's the real reason I'm writing this tutorial: I didn't decide to write a tutorial, and then choose Ruby because it's my favorite; instead, I found Ruby to be so easy that I decided there really ought to be a good beginner's tutorial which uses it. It's Ruby's simplicity which prompted this tutorial, not the fact that it's my favorite. When you write something in a human language, what is written is called text. Code . If you come across something you don't understand, or you have a question which wasn't answered, write it down and keep reading!

Windows Installation Global Properties. Advanced GIS: The Geoweb. Any type of digital map or satellite imagery that represents a geographic landscape can be brought in and overlaid in a Geographic Information System (GIS) such as Google Earth. 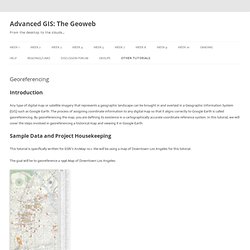 The process of assigning coordinate information to any digital map so that it aligns correctly to Google Earth is called georeferencing. By georeferencing the map, you are defining its existence in a cartographically accurate coordinate reference system. In this tutorial, we will cover the steps involved in georeferencing a historical map and viewing it in Google Earth. This tutorial is specifically written for ESRI’s ArcMap 10.1. We will be using a map of Downtown Los Angeles for this tutorial. The goal will be to georeference a 1996 Map of Downtown Los Angeles:

TEI by Example. Module 0: Introduction to text encoding and the TEI. 1. 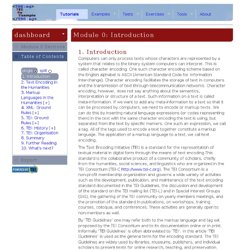 Introduction Computers can only process texts whose characters are represented by a system that relates to the binary system computers can interpret. This is called character encoding. One such character encoding scheme based on the English alphabet is ASCII (American Standard Code for Information Interchange). Character encoding facilitates the storage of text in computers and the transmission of text through telecommunication networks. By ‘TEI Guidelines’ one may refer both to the markup language and tag set proposed by the TEI Consortium and to its documentation online or in print. This introductory module first introduces the concepts of text encoding and markup languages in the humanities and then introduces the TEI encoding principles. 2.

A Gentle Introduction to XML. As originally published in previous editions of the Guidelines, this chapter provided a gentle introduction to `just enough' SGML for anyone to understand how the TEI used that standard. 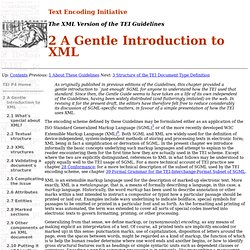 Since then, the Gentle Guide seems to have taken on a life of its own independent of the Guidelines, having been widely distributed (and flatteringly imitated) on the web. In revising it for the present draft, the editors have therefore felt free to reduce considerably its discussion of SGML-specific matters, in favour of a simple presentation of how the TEI uses XML. The encoding scheme defined by these Guidelines may be formulated either as an application of the ISO Standard Generalized Markup Language (SGML)5 or of the more recently developed W3C Extensible Markup Language (XML)6. Resources for Teaching and Learning Text Encoding. Interested in teaching or learning TEI? 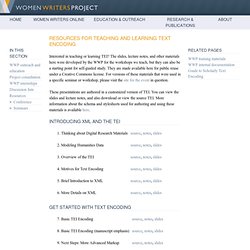 The slides, lecture notes, and other materials here were developed by the WWP for the workshops we teach, but they can also be a starting point for self-guided study. They are made available here for public reuse under a Creative Commons license. For versions of these materials that were used in a specific seminar or workshop, please visit the site for the event in question. W3Schools Online Web Tutorials.