For Education. Coding In The Classroom: How Teachers Are Learning To Code. Like a slow moving barge, the discussions around teaching students to code have remained afloat, drifting slowly towards a far away destination for many years. 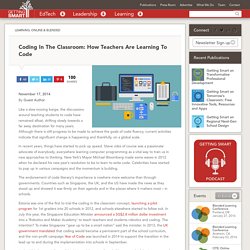 Although there is still progress to be made to achieve the goals of code fluency, current activities indicate that significant change is happening and thankfully, on a global scale. School Computer Science Curriculum. Teaching Kids to Code. Every era demands—and rewards—different skills. 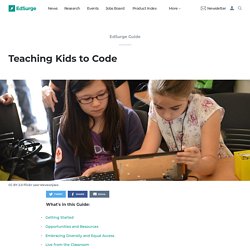 In different times and different places, we have taught our children to grow vegetables, build a house, forge a sword or blow a delicate glass, bake bread, create a soufflé, write a story or shoot hoops. Now we are teaching them to code. We are teaching them to code, however, not so much as an end in itself but because our world has morphed: so many of the things we once did with elements such as fire and iron, or tools such as pencil and paper, are now wrought in code. We are teaching coding to help our kids craft their future. In this collection we share many different perspectives on coding, from a university professor's vantage point (MIT's Mitch Resnick describes why learning to code is like learning to learn) to an entrepreneur's reflections from his cross-country roadtrip to bring coding—and his stuffed dog—to classrooms across the U.S.

We should always teach children to bake bread, feed the goats and wield a hammer. Teaching Coding (For Teachers who Can't Code) According to a recent study by Code.org, the vast majority of schools in the US do not provide a rigorous computer science curriculum ( One skill that is critically ignored in schools is the actual coding of computers, with many computer science skills focusing instead on office skills like using Microsoft Word and Powerpoint. 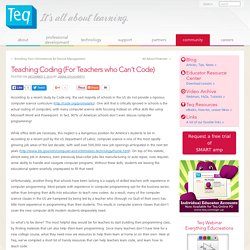 In fact, 90% of American schools don’t even discuss computer programming! While office skills are necessary, this neglect is a dangerous position for America’s students to be in. According to a recent poll by the US Department of Labor, computer science is one of the most rapidly growing job areas of the last decade, with well over 500,000 new job openings anticipated in the next ten years ( On top of this statistic, almost every job in America, even previously blue-collar jobs like manufacturing or auto repair, now requires some ability to handle and navigate computer programs.

So what’s to be done? CodeAcademy ( Initially, the workspace looks rather blank. 2015 16%20FairviewHighSchool%20Master%20District%20Course%20Descriptions%20and%20Graduation%20Requirements%20(1) Syllabus%2011. Programming for kids in schools. Education Week. 15+ Ways of Teaching Every Student to Code (Even Without a Computer) According to Code.org, 90 percent of parents in the U.S. want their children to learn computer science—it will be crucial for many jobs in the near future—but only 40 percent of schools teach it.

In my opinion, parents of every student in every school at every level should demand that all students be taught how to code. They need this skill not because they’ll all go into it as a career—that isn’t realistic—but because it impacts every career in the 21st-century world. Programming curriculum overview. We are strong proponents of teaching "computing" to students of all ages. 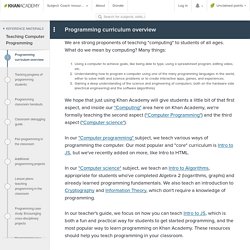 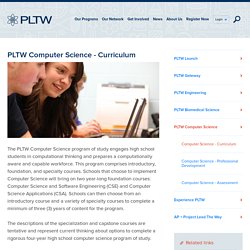 This program comprises introductory, foundation, and specialty courses. Schools that choose to implement Computer Science will bring on two year-long foundation courses: Computer Science and Software Engineering (CSE) and Computer Science Applications (CSA). Schools can then choose from an introductory course and a variety of specialty courses to complete a minimum of three (3) years of content for the program. Curriculum. Code.org offers an elementary school curriculum that allows even the youngest students to explore the limitless world of computing. 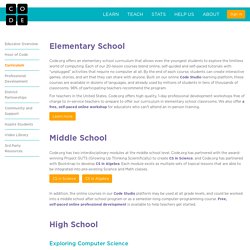 Each of our 20-lesson courses blend online, self-guided and self-paced tutorials with “unplugged” activities that require no computer at all. By the end of each course, students can create interactive games, stories, and art that they can share with anyone. CodeHS - Learn to Code at School or at Home. Coding the Curriculum: How High Schools Are Reprogramming Their Classes. There are no lockers in the hallways at Beaver Country Day School. 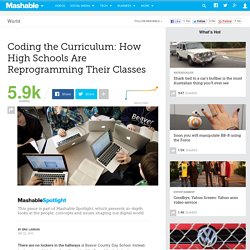 Instead, backpacks and tote bags line either side of the floor while students step over them during the mid-morning rush to class. Nearly everyone is carrying a laptop. "There used to be lockers, but nobody was really using them," a passing staff member tells me with a shrug. The private school, for grades six through twelve, sits in a quiet nook of Chestnut Hill, Mass. — a suburb sandwiched a few miles between, and directly below, Cambridge and downtown Boston. It's not far from where Mark Zuckerberg built a world-changing social network from his Harvard University dorm room just nine years ago. Two weeks ago, Beaver became the first school in the United States to implement computer coding into each of its classes. It's a new, albeit eccentric experiment. It's a new, albeit eccentric experiment. Some high schools have begun to offer programming courses as electives, but that is largely still a rarity. And in the meantime?