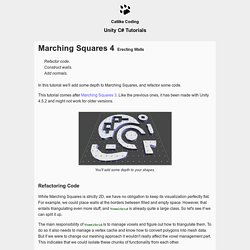 This tutorial comes after Marching Squares 3. Like the previous ones, it has been made with Unity 4.5.2 and might not work for older versions. While Marching Squares is strictly 2D, we have no obligation to keep its visualization perfectly flat. For example, we could place walls at the borders between filled and empty space. However, that entails triangulating even more stuff, and VoxelGrid is already quite a large class. The main responsibility of VoxelGrid is to manage voxels and figure out how to triangulate them. Graphs, a Unity C# Tutorial. In this tutorial we'll write some C# scripts to display increasingly complex graphs in Unity 4. 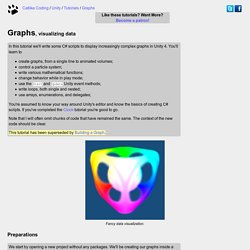 You'll learn to create graphs, from a single line to animated volumes; control a particle system; write various mathematical functions; change behavior while in play mode; use the Start and Update Unity event methods; write loops, both single and nested; use arrays, enumerations, and delegates; You're assumed to know your way around Unity's editor and know the basics of creating C# scripts. If you've completed the Clock tutorial you're good to go. Note that I will often omit chunks of code that have remained the same. The context of the new code should be clear.

Star, a Unity C# Editor Tutorial. Introduction In this tutorial you will create a simple star component and write your own custom editor for it. 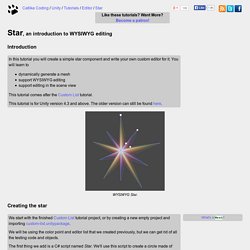 You will learn to dynamically generate a mesh support WYSIWYG editing support editing in the scene view This tutorial comes after the Custom List tutorial. This tutorial is for Unity version 4.3 and above. The older version can still be found here. Creating the star. Popularity contest - Make a circle illusion animation. Using the turtle module. 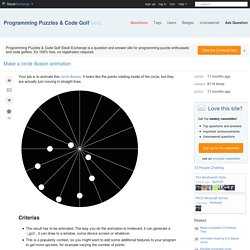 The turtles are different colours and they always face in the same direction, so they can be easily seen to be moving along straight lines by just focusing on one of them. Despite this the circle illusion is still strong. The illusion still seems quite strong even with just 3 or 4 turtles: The framerate is reduced considerably for all of these GIF examples, but it doesn't seem to detract from the illusion.

What should our site design look like? - Mathematica Meta Stack Exchange. Another approach to get something like a Penrose pattern which can be used for a tiled image is to start from a square. 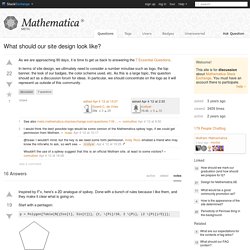 These triangles don't follow the golden ratio rule which is usually required for Penrose patterns, but the iteration can be used anyway. Using these triangles as half-darts, one could now start to generate the subtriangles following the rules of deflation for P2 and P3 tilings. The good thing here is, that this tile is instantly repeatable in any direction.

The code is really simple. CS 3451 - Homework 5. CS 3451, Summer 2013 Objective The topic of this project is polyhedral mesh manipulation. 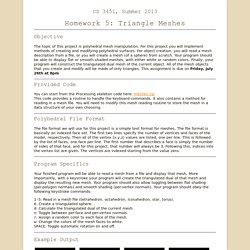 For this project you will implement methods of creating and modifying polyhedral surfaces. For object creation, you will read a mesh description from a file, or you will create a mesh (of a sphere) from scratch. Your program should be able to display flat or smooth shaded meshes, with either white or random colors. Prepare your model for 3D printing with Rhinoceros. This tutorial is written and designed to provide 3D printing enthusiasts with accurate instructions for designing 3D files that are “3D Printable”. 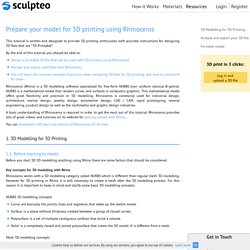 By the end of this tutorial you should be able to: Rhinoceros (Rhino) is a 3D modelling software specialized for free-form NURBS (non uniform rational B-spline). NURBS is a mathematical model that renders curves and surfaces in computers graphics. This mathematical model offers great flexibility and precision in 3D modelling. Preparing-3D-print-files.pdf. Tutorial/OpenSG2/Geometry – OpenSG. Geometry is actually a common core like all the others from the last chapter, too. 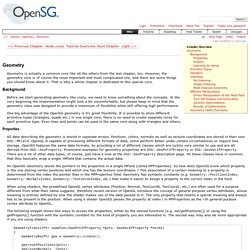 However, the geometry core is of course the most important and most complicated one, and there are some things you should know about it. That is why a whole chapter is dedicated to this special core. Background ¶ Before we start generating geometry like crazy, we need to know something about the concepts. At the very beginning the implementation might look a bit uncomfortable, but please keep in mind that the geometry class was designed to provide a maximum of flexibility while still offering high performance. Okdeluxe ★ COP15 generative identity software. < back to front page Generative identity software for COP15 the United Nations Climate Change Conference held in Copenhagen in 2009. 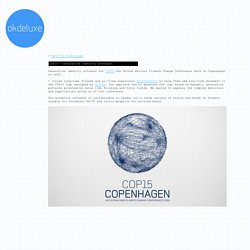 I joined long-time friends and all-time superstars shiftcontrol to help them add real-time movement to the COP15 logo designed by nr2154. Our approach was to generate the logo based on dynamic, generative patterns governed by rules like flocking and force fields. We wanted to express the complex decisions and negotiations going on at the conference. Sans titre. Introduction A while ago, I found something entitled Biomorphs, which appeared to be a bunch of random drawings created by some sort of computer program. 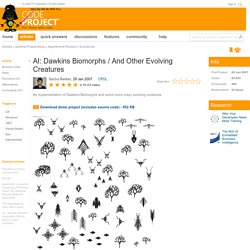 I began investigating this a bit further, and found out this was actually the result of running a popular AI type program, which is carrying out an algorithm described by Richard Dawkins from his "The Blind Watchman" book, entitled BIOMORPHS. Dawkins investigated the possibilities inherent in just the combination of mutation and selection, when combined with a very powerful development (decoding) process. CS 3451 - Homework 5. Alternativa3d. So, I have started cross-engine 3D primitives project at github. Create asymmetric 3D function by revolving a 2D function around an axis. 3D-XplorMath-J Home. Toolbox Wavelets on Meshes - A Toolbox for Multiscale Processing of Triangulated Meshes. Hugi 27 - coding corner polaris sphere tessellation 101.

Sphere Tessellation 101: "The Art of Making Spheres out of Triangles" By Polaris / Northern Dragons Dedication: To My Father, Celebrating his 66th Birthday – June 3rd. Introduction I happened to be developing an algorithm to generate spheres when I noticed the Hugi Birthday announcement. Triangulation of. Next: Surgery on Knots Up: The Sphere in Three Previous: Clifford Tori and Hopf Subsections. Clifford Tori and Hopf Fibration. Next: Triangulation of Up: The Sphere in Three Previous: Inversion Subsections. Method A.B. Draghilev and animation spatial mechanisms - Samples - SMath Studio Forum.

What's Going On with the Topology of Recursion. Donald H. McNeil c/o , © This paper is not for reproduction without permission of the author(s). The notion of “recursion” — by various definitions — goes around and about in scholarly circles, but too often without the appreciation which it deserves. JPereda's Coding Blog: Creating and Texturing JavaFX 3D Shapes. CS 3451 - Homework 5. Constructing Polyhedra from Repelling Points on a Sphere. DGD - Discretization in Geometry and Dynamics - SFB Transregio 109. Jason Smith. I’ve started generating some random maps using the hex tile set in my last post. The map below uses only 3 tiles from the set, placed and rotated randomly.

Hugi 27 - coding corner polaris sphere tessellation 101. Tutorial #1: More than one way to skin a sphere. The content that follows was originally published on the Don Havey website at. ActionSnippet. Icosahedron for pv3d « HIDIHO! Subdividing Sphere Wannabe Meshes. This post is my presentation for the “Geometry Processing” course I’m attending in IMPA, the National Institute of Pure and Applied Math in Rio de Janeiro, Brazil. Programming 3D Applications with HTML5 and WebGL. Triangle Tessellation with OpenGL 4.0 at The Little Grasshopper. This is the first of a two-part article on tessellation shaders with OpenGL 4.0+. This entry gives an overview of tessellation and walks through an example of simple triangle subdivision; in the next entry, we’ll focus on quad subdivision.