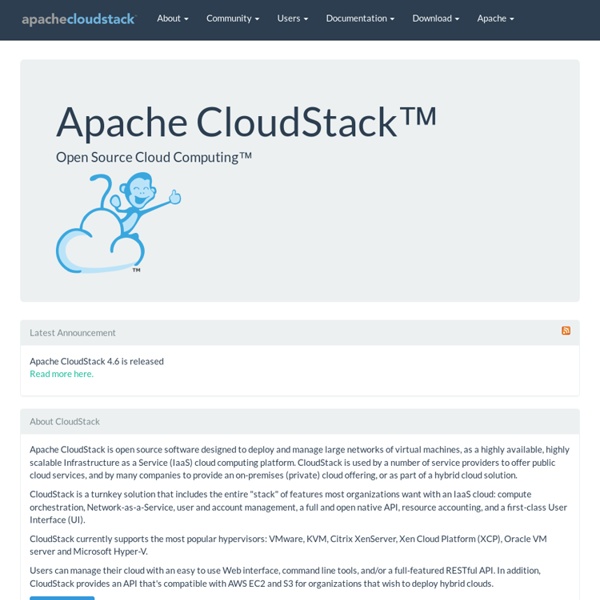 How to Mitigate OpenSSL HeartBleed Vulnerability in Apache CloudStack Wed Apr 09 2014 07:52:17 GMT+0200 (CEST) UPDATE 1: The instructions below are incomplete. The proper upgrade command is "apt-get install openssl libssl1.0.0". If you've just updated openssl, please go back and update libssl as well.UPDATE 2: Adding instructions for VMWare-hosted System VMs (Thanks to Geoff Higginbottom at ShapeBlue)UPDATE 3: Added instructions for verification of correct versions installedUPDATE 4: Apache CloudStack 4.0-4.1 not vulnerable, they use older Debian/openssl. Earlier this week, a security vulnerability was disclosed in OpenSSL, one of the software libraries that Apache CloudStack uses to encrypt data sent over network network connections.

ghettoVCB.sh - Free alternative for backing up VM's for ESX(i) 3.5, 4.x+ & 5.x DescriptionFeaturesRequirementsSetupConfigurationsUsageSample Execution Dry run ModeDebug backup ModeBackup VMs stored in a listBackup All VMs residing on specific ESX(i) hostBackup All VMs residing on specific ESX(i) host and exclude the VMs in the exclusion listBackup VMs using individual backup policies Enable compression for backupsEmail Backup Logs Restore backups (ghettoVCB-restore.sh)Cronjob FAQStopping ghettoVCB ProcessFAQOur NFS Server ConfigurationUseful LinksChange Log This script performs backups of virtual machines residing on ESX(i) 3.5/4.x/5.x servers using methodology similar to VMware's VCB tool. The script takes snapshots of live running virtual machines, backs up the master VMDK(s) and then upon completion, deletes the snapshot until the next backup. This script has been tested on ESX 3.5/4.x/5.x and ESXi 3.5/4.x/5.x and supports the following backup mediums: LOCAL STORAGE, SAN and NFS. The script is non-interactive and can be setup to run via cron.

Easy Facebook Scripting in Python « Heterogenous Mixture UPDATED: fbconsole Pypi Package and Github Repository Sometimes you just want to write a little script using Facebook’s api that updates your status, or downloads all your photos, or deletes all those empty albums you accidentally created. In order to streamline my writing of one-off facebook scripts, I created a micro api client that implements the client-side authentication flow and has a few utility functions for accessing the graph api and fql.

Veeam Ships Veeam Backup Free Edition with VeeamZIP - Virtualization Blog Blog Veeam Software has announced that the latest version of its Veeam Backup Free Edition is now available for download. The new product now includes the popular Veeam FastSCP utility and a new feature the company calls VeeamZIP. According to ablog post on the official Veeam Blog by Veeam VP of Product Strategy Doug Hazelman, VeeamZIP allows admins to quickly consolidate VM files and setting related to a VM into something akin to an archive file. Coding - the new Latin 28 November 2011Last updated at 08:45 <div class="warning"><img class="holding" src=" alt="students on computers" /><p><strong>Please turn on JavaScript.</strong> Media requires JavaScript to play.</p></div> The campaign to boost the teaching of computer skills - particularly coding - in schools is gathering force. Today the likes of Google, Microsoft and other leading technology names will lend their support to the case made to the government earlier this year in a report called Next Gen.

Exploring Windows’ Administrative Tools: Part 1 Windows has a long and honorable history of including advanced tools and options that help unlock the operating system’s full potential. In this first installment of a series of articles on these tools, you’ll see how a few easy tweaks can give you two-click access to hundreds of Windows’ most powerful features. Accessing and understanding Administrative Tools From XP on, Windows has come with a built-in suite of professional-quality, system-management utilities found collectively under the Administrative Tools menu. These apps are used to adjust and control many essential functions and features of the operating system.... DropboxPortableAHK - Portable Dropbox App Can I use DropboxPortableAHK with Dropbox two step verification? Yes, this works. However, you will have to disable two step verification before setting up DropboxPortableAHK. Afterwards, you can enable it again and DropboxPortableAHK will continue to work just fine. Why are you using Dropbox version 1.1.45, although there are newer ones available?

MSFN's Unattended Windows : Application Introduction Application Introduction Submitted by Alanoll In this section, we'll be showing you how you can install applications silently without user interaction. Each page will show you the necessary batch commands you will need to use. You will need to add these commands to your own batch file which will run from [GuiRunOnce]. You can see how I've done mine by looking at start.cmd in the Examples page. DevGuide - supersonic - The page contains a developer's guide to Supersonic. - Supersonic Query Engine - a column oriented database query engine library. First, let's give you some background of the project. Licensing All Supersonic Query Engine source and pre-built packages are provided under the Apache License 2.0.

Tcl the misunderstood Salvatore antirez Sanfilippo, 6 March 2006Why Tcl is not a toy language, but a very powerful one In an article recently linked from reddit entitled Tour de Babel you can read (among lots of other nonsense): Heck, people still use Tcl as an embedded interpreter, even though Python is far superior to Tcl in every conceivable way -- except, that is, for the frost thing. Ok, the whole article is well.. not very valid, but unfortunately while many misconceptions are promptly recognized by the informed reader, this one against Tcl is generally believed at face value. I hope this article will convince people that Tcl is not that bad. Prologue

Node.js, MongoDB, and you: an intro in parts A few years ago, two technologies were born. One was a platform for building network applications, the other a database. Both were slightly rebellious and shared a fascination with javascript. Their courtship was inevitable. In the years since, both technologies have grown up. blog.adtile Viljami S. wrote this on While I’ve worked over a decade building various websites, it has only been the past 3 years that I’ve started learning more on how to work with plain JavaScript, instead of using jQuery always as the starting point. The fact that I’m learning a dozen new things every day now, has made working on Adtile’s JavaScript SDK feel more like building an open source project than “actual work,” and I have to say I like that a lot. Today, I’m going to share some of the basic things I’ve learned during the past years, which will hopefully also help you to dive into the world of plain JavaScript, making it easier to decide whether or not you will need jQuery in your next project.