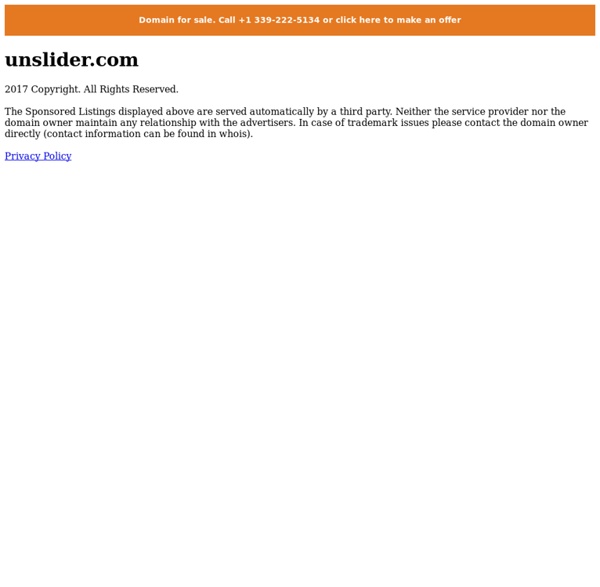 Options Although it’s lightweight, Unslider comes with a range of options to customise your slider. Here’s the default options provided. You can add, remove, or completely skip out the options object. It’s up to you. Touch support

jQuery plugin for Avgrund concept popin Avgrund is a jQuery plugin for modal boxes and popups. It uses interesting concept showing depth between popup and page. It works in all modern browsers and gracefully degrade in those that do not support CSS transitions and transformations (e.g. in IE 6-9 has standard behavior). Getting Started Installation Later is available through both npm and bower for easy installation. The installation includes all of the files that you will need to use the library.

Responsive Carousel Project: Now Open Source Posted by Scott on 08/09/2012 Topics: javascript jQuery 10 Best Responsive Content Sliders for Develoepers Use of Responsive content sliders is getting more and more popular amongst developers as they enable website designers to display content in a more organized and interesting manner while still maintaining their creative design over the orthodox slider design. Most image and content sliders are customizable and provide features and options that enhance the look and feel of a website. In this article I have gathered 10 best responsive content sliders which will help you to organize your website data and let you achieve stunning creative looks for your websites. 1.

Tooltipster - The jQuery Tooltip Plugin Styling your tooltips with a custom look ⇑ Tooltipster makes it very easy to go from one of the packaged themes and customize a few properties of your choice. To do so, we recommend that you create a so-called "secondary theme" which will override some properties of a packaged theme. CSS transitions, CSS transforms and CSS animation Commonly used as part of image galleries, or to show detail on products. This has traditionally been done in javascript by iterating over the opacity - using CSS transitions makes this very easy to add to your site. Demo 1 - One image to another, on hover

Backbone-relational Tutorial - Nested Models With Backbone.js Introduction Backbone.js Backbone.js allows to implement the whole MVC pattern on the client, leaving the server to do what he knows best: exposing a set of well-defined REST interfaces, which the client queries when he needs to fetch or update some information. No need to split the HTML rendering between the server templates and the client-side javascript. Desingineer in the Making : ngAnimate Your AngularJS Apps with CSS3 and jQuery Fallbacks ngAnimate Your AngularJS Apps with CSS3 and jQuery Fallbacks Update (2013.05.24): This article is now basing on AngularJS 1.1.5. AngularJS is a high-level, relatively new JavaScript MVW Framework that’s being powered by some fairly advanced computer science ideas typically unseen in the frontend development landscape - which leads to a logical conclusion that documentations and examples regarding certain parts of AngularJS can be pretty scarce at this moment. Take animations in AngularJS as a perfect example. As you may have already know, AngularJS ditched the familiar practice of manipulating DOM through jQuery in order to boost code testability, so up until now, animations in Angular were accomplished primarily through some fairly complicated ngClass manipulations, which could fall short when you want to create really complex effects or simply would like to have a more fine-grained control over the behaviors. To begin with, you will need to use the unstable branch of AngularJS.

tubular, a YouTube Background Player jQuery Plugin Video controls:Play | Pause | Volume Up | Volume Down | Mute Tubular is a jQuery plugin that lets you set a YouTube video as your page background. Just attach it to your page wrapper element, set some options, and you're on your way. $(page content wrapper element).tubular(options);

CLNDR.js How does it work? CLNDR takes your template and injects some data into it. The data contains everything you need to create a calendar.