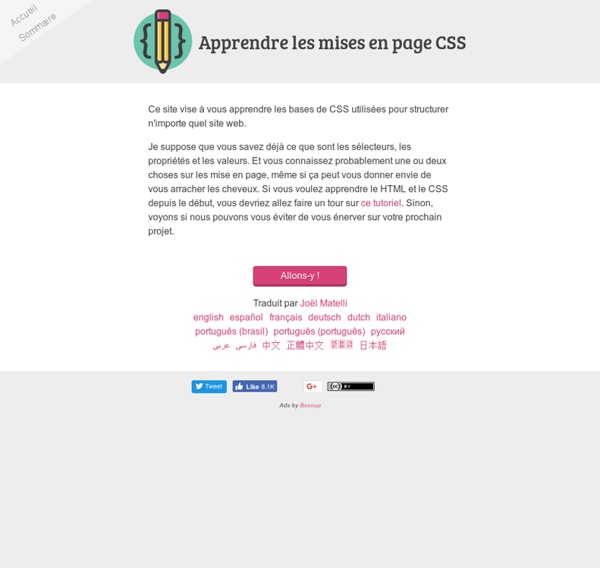 Microsoft - Free Courses from Microsoft “Be passionate and bold. Always keep learning. You stop doing useful things if you don't learn.” – Satya Nadella, CEO, Microsoft We live in a mobile-first and cloud-first world. Computing is ubiquitous, and experiences span devices and exhibit ambient intelligence. Powerful CSS-Techniques For Effective Coding Advertisement Meet the new Sketch Handbook, our brand new Smashing book that will help you master all the tricky, advanced facets of Sketch. Filled with practical examples and tutorials in 12 chapters, the book will help you become more proficient in your work. Get the book now → Remove Whitespace Between Inline-Block Elements I remember being a young developer during the Internet Explorer 6 days and desperately wanting IE to adopt display: inline-block. The inline-block value is incredibly useful when wanting to control margin and padding on "inline" elements without the need to `block and float` them. One problem that arrises when you use inline-block is that whitespace in HTML becomes visual space on screen. Gross. There are a few ways to remove that space; some of them are just as gross, one is reasonably nicer.

Overview This documentation is for @vue/cli version 3.x. For the old vue-cli, see here. Vue CLI is a full system for rapid Vue.js development, providing: Interactive project scaffolding via @vue/cli. Zero config rapid prototyping via @vue/cli + @vue/cli-service-global. A runtime dependency (@vue/cli-service) that is: Upgradeable; Built on top of webpack, with sensible defaults; Configurable via in-project config file; Extensible via plugins A rich collection of official plugins integrating the best tools in the frontend ecosystem. Beautiful Photo Stack Gallery with jQuery and CSS3 The Night Top Cat! The most effectual Top Cat! Who's intellectual close friends get to call him T.C., providing it's with dignity.Top Cat! The indisputable leader!

Build A Blog With Jekyll And GitHub Pages Advertisement Today, too many websites are still inaccessible. In our new book Inclusive Design Patterns, we explore how to craft flexible front-end design patterns and make future-proof and accessible interfaces without extra effort. Stuff you can do with the "Checkbox Hack" By Chris Coyier On The "Checkbox Hack" is where you use a connected label and checkbox input and usually some other element you are trying to control, like this: <label for="toggle-1">Do Something</label><input type="checkbox" id="toggle-1"><div>Control me</div> Then with CSS, you hide the checkbox entirely.

An event for CSS position:sticky   Here's a secret: You may not need scroll events in your next app. Using an IntersectionObserver, I show how you can fire a custom event when position:sticky elements become fixed or when they stop sticking. All without the use of scroll listeners. There's even an awesome demo to prove it: Build Truly Native Mobile Apps with Vue NativeScript and Vue.js The lightweight nature of Vue.js makes it perfect for mobile development. In addition, if you are already a Vue developer, much of the Vue syntax and app architecture will seem very familiar. All you need to do in a NativeScript-Vue app is switch the plugin you include at the start, change your app instantiation parameters, and write your front-end templates to use NativeScript modules, rather than web markup. Here are the three main differences between Vue.js for the web, and NativeScript-Vue:

How To Create Depth And Nice 3D Ribbons Only Using CSS3 In this last period on PV.M Garage we have described many trends of the modern Web Design and many techniques for creating stunning and impressive web sites. In one of our tutorials we learned how to realize a nice 3D ribbon and how to play with the drop shadow in Photoshop to simulate depth in a web design layout. This is a widespread trends in recent web design: creating a 3D perception in a website and simulating a “world” in three dimensions are two great ways for the designers to play with their skills. Designing and building a web app from scratch: a case study Written by Vincent Desclaux and Louis Eveillard.Project: What is an Acrobates de Gras lamp? At the beginning of February 2017, we were contacted by DCW éditions for a new project they had in mind: a conception module development for their Acrobates model. DCW is a company that specializes in lamp models production, reissues and design.