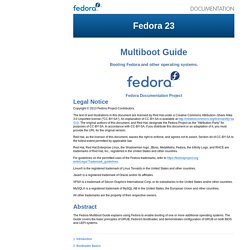 EFI Boot Sequence Explained In this section we will consider two scenarios: How EFI handles a normal boot cycle - no intervention. What happens when you press the appropriate key to enter the EFI Settings prior to a successful boot of an operating system. First, EFI attempts each entry in the order listed in its BootOrder variable. The EFI Boot Manager begins the process of loading the file (end result) by initializing each preceeding device in order. If it gets to the end of the BootOrder list and still has not been able to transfer execution, it will begin to initialize every device connected to the system (fixed and removable) and begins to look specifically for removable devices.

As EFI Boot Manger moves on to find a bootable, removable device, it looks for an EFI partition, formatted in Fat32, Fat16 or Fat12 with an \EFI\Boot\ directory structure and that bootx64.efi is in that directory. When that file is found and loaded, execution is passed to it. 8.1.2. 8.1.3. Uefi - How do I get my HP laptop to boot into grub from my new efi file? How to install Fedora dual-boot with Windows 10. 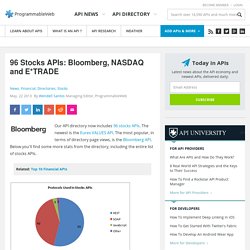 Application binary interface. Binary interface between two program units A high-level comparison of in-kernel and kernel-to-userspace APIs and ABIs An ABI defines how data structures or computational routines are accessed in machine code, which is a low-level, hardware-dependent format. 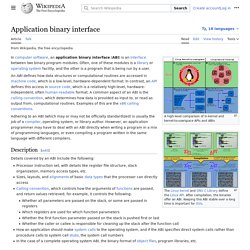 In contrast, an API defines this access in source code, which is a relatively high-level, hardware-independent, often human-readable format. A common aspect of an ABI is the calling convention, which determines how data is provided as input to, or read as output from, computational routines. Examples of this are the x86 calling conventions. Adhering to an ABI (which may or may not be officially standardized) is usually the job of a compiler, operating system, or library author. C++ Strings. C++ provides following two types of string representations − The C-style character string.The string class type introduced with Standard C++. 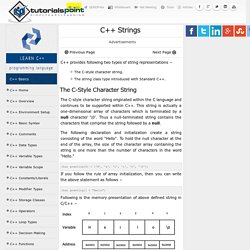 Never give up; you might be closer to reaching your goal than you think « David McElroy. Every person has reached a point in his life when he wanted something very badly, but he was discouraged and ready to quit. 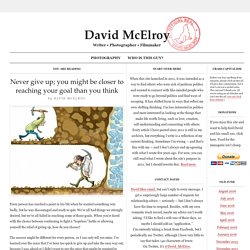 We’ve all had things we strongly desired, but we’ve all failed in reaching some of those goals. When you’re faced with the choice between continuing to fight a “hopeless” battle or allowing yourself the relief of giving up, how do you choose? The answer might be different for every person, so I can only tell you mine. I’ve learned over the years that I’ve been too quick to give up and take the easy way out, because I was afraid or I didn’t want to pay the price that might be required to continue fighting or I simply preferred the certainty of quitting to the uncertainty of continuing the fight.

4.3 — Static duration variables. The static keyword is one of the most confusing keywords in the C++ language (maybe with the exception of the keyword “class”). 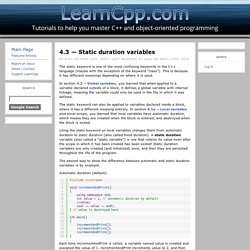 This is because it has different meanings depending on where it is used. In section 4.2 -- Global variables, you learned that when applied to a variable declared outside of a block, it defines a global variable with internal linkage, meaning the variable could only be used in the file in which it was defined. The static keyword can also be applied to variables declared inside a block, where it has a different meaning entirely. In section 4.1a -- Local variables and local scope, you learned that local variables have automatic duration, which means they are created when the block is entered, and destroyed when the block is exited.

Using the static keyword on local variables changes them from automatic duration to static duration (also called fixed duration). The easiest way to show the difference between automatic and static duration variables is by example. Igloo - BDD Style Unit Testing for C++ There are 3 levels in every software system: high-level architecture, mid-level design and low-level implementation. 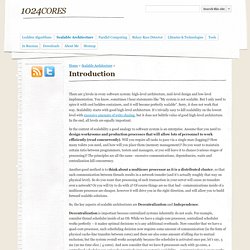 You know, sometimes I hear statements like "My system is not scalable. But I only need to spice it with cool lockfree containers, and it will become perfectly scalable". Sorry, it does not work that way. What is DevOps? First, let’s just say there is no definitive answer. 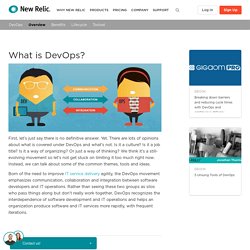 Yet. There are lots of opinions about what is covered under DevOps and what’s not. Introduction - 1024cores. I bet you had heard terms like "lockfree" and "waitfree". 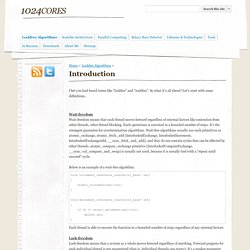 So what it's all about? Let's start with some definitions. PWLSF-07/2015 - Devon O'Dell on Nonblocking Algorithms & Scalable Multicore Programming. Pointers and Dynamic Memory in C++ (Memory Management) "Using Race Conditions in Correct Concurrent Software" by Devon O'Dell. Introduction to Pointers in C++, Tutorial on Pointers, C++ Pointers. Learn C++ Educational Videos and Resources. C++Interview Questions and Answers. C Online Quiz. C++ Certification Practice Test. Untitled. CppCon. Strange Loop. The Employment Status of Americans Visualized by Age. Visualization Mobile Users: If you are having issues using the interactive version of this visualization, you can find a static version of it here. 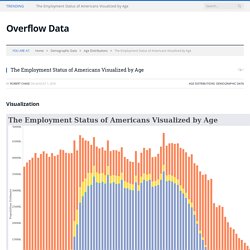 Data Notes A couple weeks ago, I published a graphic showing how marital status changes with age. I decided to do another one showing how employment status changes as well. This visualization uses Tableau to show the employment status for every age. The Best Place to Put Your Wi-Fi Router - Explained by Physics. Jason Cole, a PhD scholar of Imperial College, London, has studied this plasma-electromagnetic waves’ interaction. He writes that the behavior of intense EM waves and plasma can be predicted using the Maxwell’s equations that date back to the 19th century. How Maths fixed the Wi-Fi in a flat? Jason used these equations to improve the Wi-Fi reception in his flat. He explains that the normal wireless router antenna emits EM radiations due to a small current oscillating at 2.4GHz. In his model, he introduced a similar current and made it to oscillate; the resultant EM waves flow was dictated by Maxwell’s equations.

How To Create Bootable USB Without Any Software In Windows 10 (Using Command Prompt) These days very few people burn ISO images on disks and use them as bootable media. Now, USB drives have replaced them as they are faster and a more convenient method to install an operating system on a machine. While there are many tools to make bootable USB drive, there’s one provided by even Microsoft, there’s a way to do the same without any software.

How Does Google do Planet-Scale Engineering for a Planet-Scale Infrastructure? How does Google keep all its services up and running? They almost never seem to fail. If you've ever wondered we get a wonderful peek behind the curtain in a talk given at GCP NEXT 2016 by Melissa Binde, Director, Storage SRE at Google: How Google Does Planet-Scale Engineering for Planet-Scale Infrastructure. Melissa's talk is short, but it's packed with wisdom and delivered in a no nonsense style that makes you think if your service is down Melissa is definitely the kind of person you want on the case. Oh, just what is SRE? It stands for Site Reliability Engineering, but a definition is more elusive. Building Super Scalable Systems: Blade Runner Meets Autonomic Computing in the Ambient Cloud.

"But it is not complicated. [There's] just a lot of it. " -- Richard Feynman on how the immense variety of the world arises from simple rules. Contents: We have not yet begun to scale. Linux Filesystem Hierarchy. When migrating from another operating system such as Microsoft Windows to another; one thing that will profoundly affect the end user greatly will be the differences between the filesystems. Google Architecture. Update 2: Sorting 1 PB with MapReduce. How does a relational database work - Coding Geek. When it comes to relational databases, I can’t help thinking that something is missing. They’re used everywhere. There are many different databases: from the small and useful SQLite to the powerful Teradata. But, there are only a few articles that explain how a database works.

You can google by yourself “how does a relational database work” to see how few results there are. Moreover, those articles are short. Are relational databases too old and too boring to be explained outside of university courses, research papers and books? As a developer, I HATE using something I don’t understand. A reusable, high performance, socket server class - Part 1. The following source was built using Visual Studio 6.0 SP5 and Visual Studio .NET. Design and Implementation of a High-performance TCP/IP Communications Library. The C10K problem. [Help save the best Linux news source on the web -- subscribe to Linux Weekly News!]

State Machine Design in C++ C++ and Beyond 2012: Herb Sutter - atomic<> Weapons, 1 of 2. Memory ordering. Memory ordering is a group of properties of the modern microprocessors, characterising their possibilities in memory operations reordering. Advanced C++ Metaprogramming: Davide Di Gennaro: 9781460966167: Amazon.com. Inter-socket communication with less than 2 microseconds latency. Non-blocking I/O through selectors is the part of networking that I like the most. The Java NIO API is not easy, but once you understand the reactor pattern and abstract away its complexities you end up with a powerful and re-usable network multiplexer. Running Time Graphs.