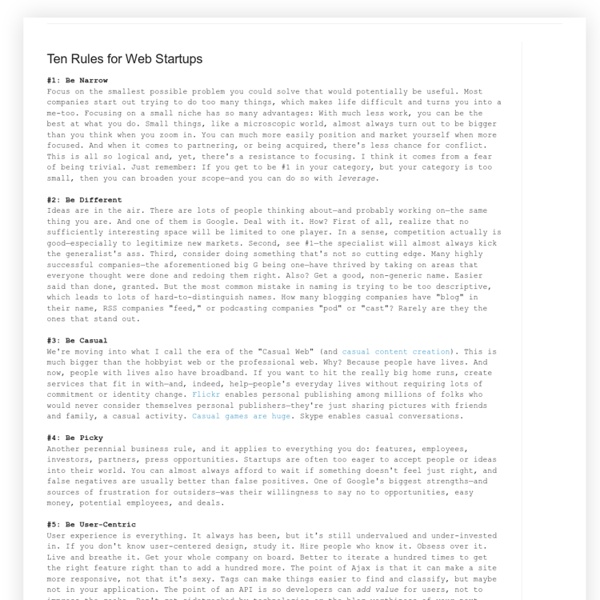 #1: Be NarrowFocus on the smallest possible problem you could solve that would potentially be useful. Most companies start out trying to do too many things, which makes life difficult and turns you into a me-too. Focusing on a small niche has so many advantages: With much less work, you can be the best at what you do. Small things, like a microscopic world, almost always turn out to be bigger than you think when you zoom in. You can much more easily position and market yourself when more focused. And when it comes to partnering, or being acquired, there's less chance for conflict. #2: Be DifferentIdeas are in the air. #3: Be CasualWe're moving into what I call the era of the "Casual Web" (and casual content creation). #4: Be PickyAnother perennial business rule, and it applies to everything you do: features, employees, investors, partners, press opportunities. #5: Be User-CentricUser experience is everything. #7: Be GreedyIt's always good to have options. #11 (bonus!)

The cult of the NDA To all those entrepreneurs with innovative, unique business ideas who want to capitalize on them before someone else does, I have one piece of advice: Get over it. Riding the tech boom of the late 1990's, there were an immense number of tech companies founded with thousands of innovative, smart new ideas. As a research analyst at an investment bank during that time, I personally visited with hundreds of these young companies, and even invested personally in a handful, either directly or through my firm's venture fund. Every one of these companies believed they had a unique idea, either a piece of technology, a business model, or a way of building a product. Non-disclosure agreements (NDA's) were the order of the day. One startup even printed its NDA on the back of visitor's badges, just like a software "shrink wrap" agreement: "By accepting this visitor's badge, you agree to the terms of this Non-Disclosure Agreement."

How A Startup Named Hipster Got 10K Signups In Two Days, Without Revealing What It Does By now you might be familiar with the startup with the funny name, as its very existence made news outlets as diverse as the Washington Post, Portfolio.com and Hipster Runoff. And while Hipster CEO Doug Ludlow still refuses on the record to say what the site is about, at this point we’ve heard the words Yelp, Quora and location-based Q&A site being tossed around by sundry reporters, savvy Googlers and one ambitious tipster who sent us an in-depth analysis of its Javascript. But just like the hipster tribe themselves, what Hipster does is besides the point (at least at the moment). Product Psychology Explains How To Get Users Hooked On Products Designed Around Habit And Context Last year, tens of thousands of hackers signed up to receive Hack Design, a newsletter teaching the principles of design so that those used to focusing on how things work behind the scenes could start at a point that also considers aesthetics and user-friendliness. Today, a group of product-focused creators — “Hooked” author Nir Eyal, Product Hunt‘s Ryan Hoover, and Greylock Partners‘s Josh Elman, among others — are hoping to follow up on that newsletter’s success with the launch of Product Psychology, a weekly course on the psychology of user behavior. Courses will arrive in the form of link-blog like posts delivered to your email inbox. Each week, one curator from the 17 psychologists, entrepreneurs, and designers involved in the project focuses on a single topic they’re especially versed in, with posts ranging from “How Scarcity & Impatience Drive User Behavior” to “Does Your Product Rely On Intuition Or Deliberation?”

Minimum Viable Product rant Lately, you can’t swing a dead cat at a gathering of Internet entrepreneurs without hitting someone in mid-sentence talking about their “minimum viable product.” The problem is that half the time, I don’t hear them talking about minimum viable products. I hear them talking about “minimum products.” Business 2.0: Searching for angels - May. 24, 2006 Here is what every aspiring business-owner should look for in early-stage backers. SAN FRANCISCO (Business 2.0 Magazine) - The right time to raise the first round of money varies from startup to startup. Some companies -- mostly software or Web-based ventures -- need little cash to get off the ground. But if you're building a physical product, you'll be looking for funding earlier in the game. That's where angel investors come in: Unlike venture capitalists, who usually wait until a company has a working product, they specialize in early-stage startups.

Startup = Growth September 2012 A startup is a company designed to grow fast. Being newly founded does not in itself make a company a startup. Nor is it necessary for a startup to work on technology, or take venture funding, or have some sort of "exit." Dropbox – The Power of a “Value Based” Startup Drew Houston, CEO/Founder of Dropbox, gave an amazingly forthcoming presentation at the Startup Lessons Learned Conference chronicling his team’s path from idea to their current position as one of today’s hottest startups. Because of the importance of protecting user data, they modified the “launch early, launch often” mantra to “learn early, learn often.” And they aspired to gain the “best understanding of customers as early as possible.” My favorite quote from Drew’s presentation highlighted the power of focusing on what is really important: “If you make a feature matrix of Dropbox versus all the other products out there, we’ll never come out in front. We wanted to do a few things [really] well as opposed to a lot of things kind of well, presented in a way that’s confusing.”

Skip the Boring Business Plan. Focus on This Strategy Instead. The concept of starting a business without a plan would send anyone running -- and for good reason. Every great business begins with a plan that outlines measurable goals and the methods for achieving them. Plans, done correctly, can be a great roadmap. The real question is how detailed does your plan have to be. Business plans serve a very specific purpose: to demonstrate where you currently are and where you would like to be. Communicating with code Some people can sell their ideas with a brilliant speech or a slick powerpoint presentation. I can't. Maybe that's why I'm skeptical of ideas that are sold via brilliant speeches and slick powerpoints. Or maybe it's because it's too easy to overlook the messy details, or to get caught up in details that seem very important, but aren't. I also get very bored by endless debate.

Phase two: Prototype the product - May. 24, 2006 Finally the rubber meets the road, as you stake out your intellectual property and assemble the demo that will help you sell your idea. A prototype is where the rubber starts to hit the road: It's the first physical embodiment of your business idea, and a tool you'll use to attract the resources you need to grow. Don't confuse a prototype with the final product - a distracting and potentially fatal mistake. Pretty looks aren't important. A good prototype is just a working demonstration that showcases what your product will do.

The ‘Facebook Class’ Built Apps, and Fortunes Photo STANFORD, Calif. ALL right, class, here’s your homework assignment: Devise an app. Get people to use it. Repeat. The State Of Web Development Ripped Apart In 25 Tweets By One Ma There are few people who know the ins and outs of the web as well as Joe Hewitt. For the past decade, he’s had his hands deep in everything from Netscape, to AOL, to Firefox, to Facebook (where he currently works). Hewitt also knows a thing or two about the iPhone. He’s the one who first built Facebook’s excellent iPhone web app (before there were native apps on the iPhone), and then the native app — which is one of the best apps on the platform. So when he rants about something (as he does from time-to-time), people listen. And today he went on one such rant.

8-Day App Business Plan: How to Create Your First Mobile App Total Reading Time: 31 minutes (or download PDF template at end of post). Intro by Arman I have always believed that one of the most creative and exciting ways to be a solopreneur is by building an app business. When it comes to creating a Freedom Lifestyle, there are few better ways to create passive income and more freedom in your life.