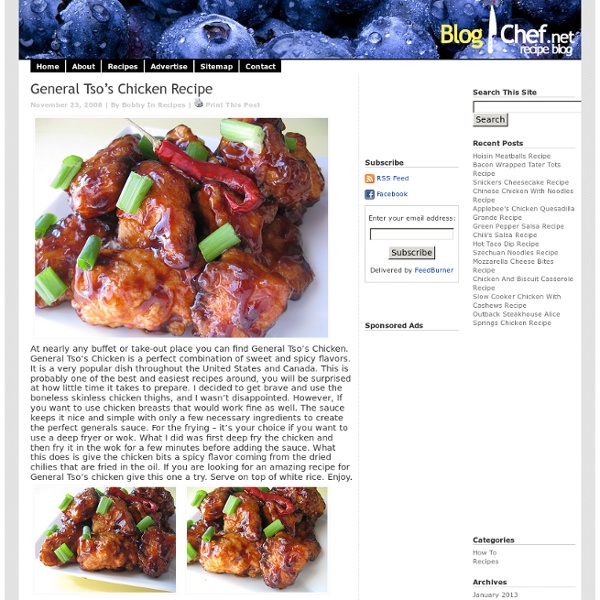 At nearly any buffet or take-out place you can find General Tso’s Chicken. General Tso’s Chicken is a perfect combination of sweet and spicy flavors. It is a very popular dish throughout the United States and Canada. This is probably one of the best and easiest recipes around, you will be surprised at how little time it takes to prepare. I decided to get brave and use the boneless skinless chicken thighs, and I wasn’t disappointed. However, If you want to use chicken breasts that would work fine as well. Ingredients: 1lb boneless skinless chicken thighs (cut into 1” chunks) 5 dried red chili peppers 3 green onions (sliced) 3 eggs (beaten) ½ cup cornstarch oil (for frying)Sauce-1 ½ tablespoons rice vinegar 2 tablespoons rice wine 3 tablespoons sugar 3 tablespoons soy sauce 2 teaspoons cornstarch Cooking Instructions: Step 1: In a large mixing bowl combine cornstarch and beaten eggs. Step 3: Heat deep fryer or wok to 375 degrees and deep fried chicken bits in batches.

Bacon-wrapped Jalapeno Chicken Bites - StumbleUpon 610K+Add bacon to anything and it will fly off the table. That’s what a caterer once told me and I believe it. Certainly applies here. Two-Bite Strawberry Hand Pies This post comes to you from damply beautiful Seattle, Washington! Yes, kids, I am in Seattle for BlogHer Food 2012 and not just as an attendee, but I am speaking! I am nervous, but terribly excited, and ready to get the party started! The last month has been a CRAZY travel month for me. Sweet Recipe: Double Chocolate Bourbon Egg Cream Here's a funny thing about an egg cream: It contains neither eggs nor cream. What it does offer is a sweet yet light way to end a meal. And, if you're so inclined (I am) you can slip your booze in at the same time.

Gluten Free: Pear Crumble Slices Friday, 19 April 2013 Gluten Free: Pear Crumble Slices I wouldn't say my family are predictable, but there are some guaranteed phrases that come up around the dinner table. Sambhar Recipe (Indian Soup Sambhar is a South Indian dish made of toor dal, vegetables, turmeric powder, curry leaves, tamarind, cinnamon sticks, whole dried red chiles, cilantro, roasted coriander seeds and other Indian spices. It resembles a soup; and is often served alongside idli (rice cakes) or dosa (Indian crêpe). To make my version of sambhar, I start by boiling toor dal with a lot of vegetables, such as Indian eggplant, drumsticks, okra, carrots, turnips, pumpkin, sweet potatoes or Idaho potatoes and tomatoes, shallots and onions. Then I let the vegetables simmer until the lentils are cooked through. If you’ve ever had sambhar at an Indian restaurant and wanted to make it at home, now you can.

Chicken Pot Stickers This is a fun and tasty recipe to make. I used leftover roasted chicken breast tonight but you can also use ground pork or ground chicken. I have always been intimidated by cooking Asian food but I have finally gotten this recipe down. It’s fun to make and the kids have a lot of fun helping. Baking for Beginners: After Dinner Mint Brownies I'm damn fussy about my brownies. I don't really like to put things in them. If I wanted an Oreo, I'd eat an Oreo. They have no business getting in the way of the gooey centre of a brownie. That's the best part. Ad Hoc Buttermilk Fried Chicken Recipe March 2, 2010 nothing beats fried chicken and waffles! My love for fried chicken, much like my love for noodles, is not very discerning. I can definitely tell the difference between good and bad noodles and chicken, but my love is so all-encompassing that I can forgive faults easily. With so many kinds of fried chicken in the world, how would I be able to tell good from bad if I didn’t try them all?

recipe: sweet & sour chicken I was ridiculously excited when I came across this recipe for homemade sweet and sour chicken. You guys, it is SO GOOD. It’s a little involved with several steps (coating chicken, frying a little bit, then baking) but it is all worth it.