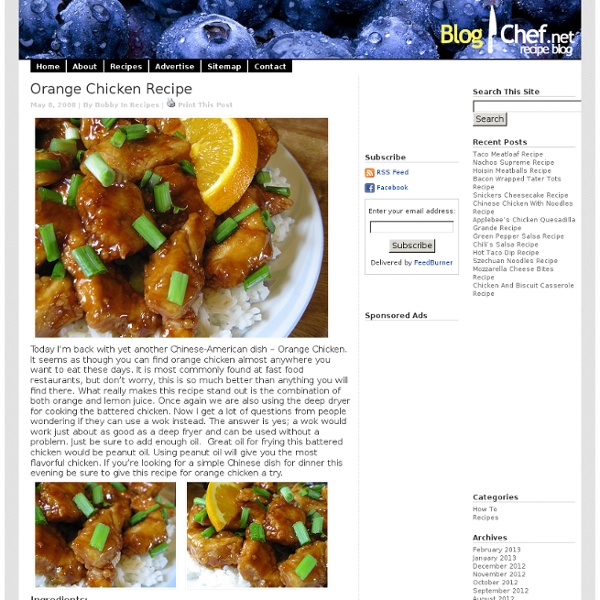 Today I’m back with yet another Chinese-American dish – Orange Chicken. It seems as though you can find orange chicken almost anywhere you want to eat these days. It is most commonly found at fast food restaurants, but don’t worry, this is so much better than anything you will find there. What really makes this recipe stand out is the combination of both orange and lemon juice. Once again we are also using the deep dryer for cooking the battered chicken. Now I get a lot of questions from people wondering if they can use a wok instead. Cooking Instructions: Step 1: Combine flour, salt, and pepper. Step 2: Meanwhile, in a large saucepan combine 1 ½ cups water, lemon juice, orange juice, rice vinegar, and soy sauce.

Honey Sesame Chicken Somehow I have gotten on this Asian kick lately and I'm loving every bit of it. I am finding out just how easy making these meals are and they all are so yummy! I'm also pretty darn proud of myself for totally keeping to my meal plan this week. I chose dishes to make and didn't really specify a day but the night before I needed to make dinner I would choose which one to make. It worked pretty good for me that way! Kung Pao Chicken Recipe Here’s the recipe you all might have been waiting for – the legendary Kung Pao Chicken! I have wanted to make this for the longest time but have just finally got around to doing so now. Kung Pao chicken first originated in central-western China and has become very popular in the United States.

General Tso’s Chicken This recipe for General Tso's chicken has been the most popular on this site since I first posted it in 2009. Month after month it continues to be the most viewed and searched for recipe here. I love that so many of you, presumably, have visited on a mission to replicate this tasty dish from a favorite take-out. mom’s apple cake My mother makes the best apple cake, and has for as long as I can remember. Big cinnamon-y chunks of apple nestle into a coffee cake I would call “unbelievably” moist, but really, should not be hard to believe considering that my mother is also the one who brought us another of the best cake recipes on this site, The Chocolate Chip Sour Cream Cake. The cake gets better the second day, when the apples juices seep further into the cake and I have seen the conviction of many a chocolate-obsessed/fruit dessert non-believers crumble upon trying a single slice of it. The apple cake, it’s some good stuff. Not above pilfering content for my website from my nearest and dearest, I talked my mom into coming over (and heaving up all 51 stairs–she likes to count them) on Sunday to bake the cake with me for the New Years dinner at my in-laws today. I wanted to get the recipe down, but also to get the back story on the cake recipe.

Honey Soy Stir Fried Chicken: Can I order an easier life? For all those who have it harder than I do.... I've been feeling a bit sorry for myself these days, with all the suffering I've been doing at the hands of Son's unsuccessful potty training venture, Daughter #1's start of school, and Daughter #2's temper tantrums over swim lessons, and all in all just being tried day after day. First grade homework stresses me out like you wouldn't believe, which sounds slightly ridiculous I know, but the act of trying to get through homework without pulling out all of my hair is a feat only managed by the best of women I'm sure. I am not one of them. At one point during first grade homework, my voice will rise and I will lose my temper. I know you're all snickering.

- StumbleUpon Pin ItWhen cookbook author Gina Von Esmarch compiled a collection of her favorite family recipes while between two jobs, she probably didn’t imagine this would lead to her authoring not one but two cookbooks. But that is exactly what happened. At her husband’s urging, Gina had her recipes professionally photographed and published her first cookbook Taste This!. The success of her first cookbook led her to release a second cookbook titled, Taste This! Baked Eggs in Bread Bowls This was our breakfast Sunday morning. Aren’t they cute? They were very, very good. It’s the whole egg and the toast combo all together in one nice package. These are so easy to make and wouldn’t they be splendid on a brunch buffet table?

How to Cook Chinese Food I consistently get a lot of questions from people wondering how to cook Chinese food. Regardless of if you are just learning how to cook or have been cooking for awhile you will probably find this article useful. The truth is, cooking Chinese food is not hard at all. In fact, many Chinese dishes are all very similar so once you learn how to cook a few different dishes, you should develop a good understanding of Chinese cooking. In this article I will explain to make a few popular Chinese dishes. These dishes include Sesame-Orange Chicken, General Tso’s Chicken, Cashew Chicken, Black Pepper Chicken, Egg Rolls, and Crab Rangoons. Avocado & Feta Cheese Creamy Rice with Grilled Chicken First when I saw this challenge I thought to myself..this sounded really interesting..but would I want to join?...hmm...A few days passed by. The idea of coming up with a new dish was a struggle and it kept eluding me. Eventually, I couldn't resist the inner challenge I have, so here we go: Avocado & Feta cheese creamy rice and Grilled Chicken. Thanks to Denise and Lazaro for coming up with this challenge and offer the incredible prizes!

Steak au Poivre - The Showstopper I have a comment on this comment, then I have a comment for the OP. To Amy: Removing to foil is simply a way to keep the steaks warm whilst resting (FOR 5 MINUTES AT LEAST… ALWAYYYS!). When the OP says remove to foil, he/she doesn’t mean to wrap them tightly. They mean to place them in a plate, and form a loose ‘covering’ of foil. This will simply trap some of the heat and allow it to remain warm, without trapping too much moisture. Chinese Lemon Chicken Recipe Why order take out when you can make your own Chinese lemon chicken at home? There are a few different versions of lemon chicken out there, all coming from different countries. Probably the most popular type of lemon chicken would be baked in the oven. We all know baked lemon chicken is great but here is the Chinese version – just like take out or at the buffets.

Balsamic BBQ Glazed Chicken A homemade balsamic bbq sauce is used to glaze chicken as it’s grilling. The result is tender chicken with a slightly sweet, and tangy taste. Summer is one of my favorite seasons for one simple reason: grilling. Buta Udon (Udon with braised pork) While this this dish has its roots firmly planted in my New York apartment, I could totally picture it being served in an Okinawan noodle bar. Okinawa is the southern-most island of Japan, just a stones-throw from Taiwan and their food takes cues from their neighbors, using a lot of pork and fish. Rather than using a traditional dashi based soup stock for udon, I’ve combined some braising liquid from the pork belly kakuni I made the other night with dashi to create a tasty, though unconventional broth for the noodles. If you’re a ramen maniac or an udon fanatic (or better yet, both), this may be your perfect bowl of noodle soup as it falls somewhere in between the two while tasting entirely different from either I used Sanuki Udon noodles which have a pleasantly firm texture when cooked al dente. The soup has a deep almost indescribable savory flavor met right in the middle by a subtle sweetness and a mellow zing coming from the long-cooked ginger.

Magic Sauce Recipe I call this the magic sauce recipe. In part, because it makes everything it touches shimmer with deliciousness. It's magic like that. Technically, it's a riff on a chimichurri sauce - one that veered off the rails in a big way. Much tweaking has rendered it a distant second cousin.