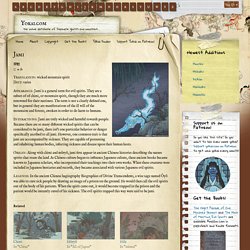 They are a subset of of chimi, or mountain spirit, though they are much more renowned for their nastiness. The term is not a clearly defined one, but in general they are manifestations of the ill will of the mountains and forests, awoken in order to do harm to humans. INTERACTIONS: Jami are truly wicked and harmful towards people. 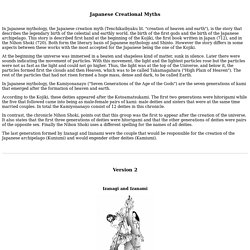 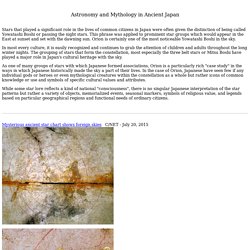 This phrase was applied to prominent star groups which would appear in the East at sunset and set with the dawning sun. The Aswang Phenomenon - Full Documentary on the Filipino Vampire. Japanese Myths & Monsters. Iznami and Iznagi: A Creation Myth from Japan. ATLANTEAN GARDENS: Ancient Buddhist Statue Came From Space. It sounds like an Indiana Jones plot, but researchers say a heavy Buddha statue brought to Europe by the Nazis was carved from a meteorite that likely fell between 10,000 - 20,000 years ago along the Siberia-Mongolia border. 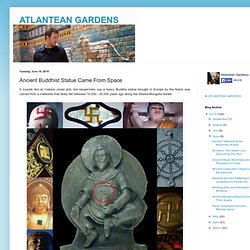 This space Buddha, also known as "iron man" to the researchers, is of unknown age, though the best estimates date the statue to sometime between the eighth and 10th centuries. The carving depicts a man, probably an Aryan Buddhist god, perched with his legs tucked in, holding something in his left hand. On his chest is an ancient Aryan symbol, most famously known as the swastika, later co-opted by the Nazi party of Germany. "One can speculate whether the swastika symbol on the statue was a potential motivation to displace the 'iron man' meteorite artifact to Germany," the researchers wrote in the journal Meteoritics & Planetary Science.

They found that the statue is carved from a rare class of space rocks known as ataxite meteorites. ATLANTEAN GARDENS: Ancient Legendary Origins of the Samurai. Jade Emperor. The Jade Emperor (Chinese: 玉皇; pinyin: Yù Huáng or 玉帝, Yù Dì) in Chinese culture, traditional religions and myth is one of the representations of the first god (太帝 tài dì). 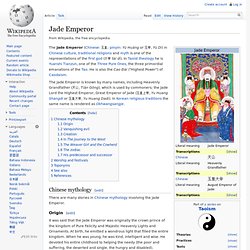 In Taoist theology he is Yuanshi Tianzun, one of the Three Pure Ones, the three primordial emanations of the Tao. He is also the Cao Đài ("Highest Power") of Caodaism. The Jade Emperor is known by many names, including Heavenly Grandfather (天公, Tiān Gōng), which is used by commoners; the Jade Lord the Highest Emperor, Great Emperor of Jade (玉皇上帝, Yu Huang Shangdi or 玉皇大帝, Yu Huang Dadi). In Korean religious traditions the same name is rendered as Okhwangsangje. Buddhist mythology. Wrathful deities[edit] One notable feature of Tibetan Buddhism and other Vajrayana traditions in particular is the use of Wrathful deities.[2] While the deities have a hideous and ferocious appearance,[3] they are not personifications of evil or demonic forces.[2] The ferocious appearance of these deities is used to instill fear in evil spirits which threaten the Dharma.[3] Wrathful deities are used in worship and devotion[2] with the practice dating to the 8th century[2] having been instituted by Padmasambhava.[2] The origin of these deities comes from mythology in Hinduism, Bon, or other folk deities.[2] Yaksha[edit] The Yaksha are a broad class of nature-spirits, usually benevolent, who are caretakers of the natural treasures hidden in the earth and tree roots.[4] Having been worshiped in India since before the Vedic period,[5] their worship was adopted by both Buddhism and Jainism.[5] Yidam[edit] The Yidam, or Ishta-devata, is a personal meditation deity. 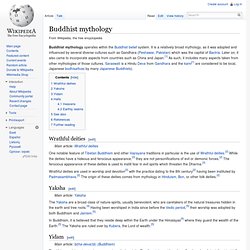 Hells[edit] Heavens[edit] Chinese mythology. Chinese mythology refers to those myths found in the historical geographic area of China: these include myths in Chinese and other languages, as transmitted by Han Chinese as well as other ethnic groups (of which fifty-six are officially recognized by the current administration of China).[1] Chinese mythology includes creation myths and legends, such as myths concerning the founding of Chinese culture and the Chinese state. 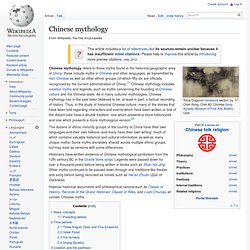 As in many cultures' mythologies, Chinese mythology has in the past been believed to be, at least in part, a factual recording of history. Thus, in the study of historical Chinese culture, many of the stories that have been told regarding characters and events which have been written or told of the distant past have a double tradition: one which presents a more historicized and one which presents a more mythological version.[2] Historians have written evidence of Chinese mythological symbolism from the 12th century BC in the Oracle bone script. Major concepts[edit] Japanese Mythology - your guide to the gods of Japan. Japanese Mythology - Myth Encyclopedia - god, story, legend, names, ancient, tree, famous, animal, world, Chinese.

The mythology of Japan has a long history dating back more than 2,000 years. 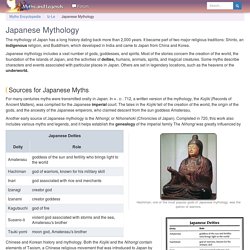 It became part of two major religious traditions: Shinto, an indigenous religion, and Buddhism, which developed in India and came to Japan from China and Korea. Japanese mythology includes a vast number of gods, goddesses, and spirits. Japanese mythology.