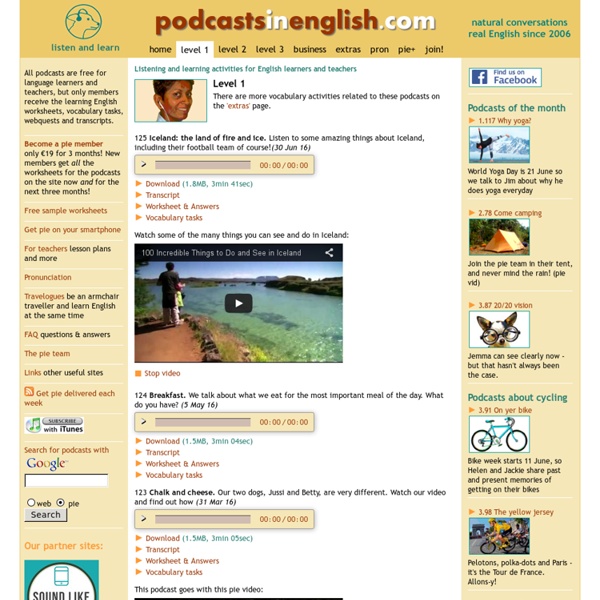 About Ben | Dig into English Hi, English learners! I’m Ben, the host of the Dig into English podcast. I’m from the wonderful city of Adelaide in South Australia, and I love learning languages. I’ve learnt some of these languages in classrooms and some completely by myself. The main reason was that I stopped studying for tests and remembering grammar rules, and instead I listened to podcasts and read things that interested me. That’s why I created Dig into English. I want to help English learners to learn effectively. I love meeting English learners and hearing ideas for lesson topics, so please don’t forget to introduce yourself and leave comments on posts.

Listen to English - learn English! - The podcast website for people learning English This is one of the school meals which Martha Payne photographed for her blog. She had carrot soup, pasta with meat and vegetables and more carrot, and yoghurt. Today we visit Scotland, to find out what a Scottish schoolgirl thinks of her school meals. Martha Payne is 9 years old. Martha is interested in the food at her school. Children in other schools, and in other countries, started to read Martha’s blog. And at this point, the bureaucrats who run the education system in the part of Scotland where Martha lives became aware of her blog. Martha’s headteacher told Martha the bad news, and Martha was sad and wrote a final blog post to say goodbye to her many readers. At this point, we will make a little diversion to talk about football. Well, the bureaucrats who decided that Martha had to stop her blog did not want people talking about the school dinners in their schools. I like stories with a happy ending. Categories podcasts Tags 49 Comments This file has been downloaded 1445743 times

Poems for teens For ESL English Language Learners "The story starts out simply enough: Jess Aarons wants to be the fastest boy in the fifth grade--he wants it so bad he can taste it. He's been practicing all summer, running in the fields around his farmhouse until he collapses in a sweat. Then a tomboy named Leslie Burke moves into the farmhouse next door and changes his life forever. Not only does Leslie not look or act like any girls Jess knows, but she also turns out to be the fastest runner in the fifth grade. After getting over the shock and humiliation of being beaten by a girl, Jess begins to think Leslie might be okay.

Poems I might like For ESL English Language Learners Christopher Boone knows all the countries of the world and their capitals and every prime number up to 7,057. He relates well to animals but has little understanding of human emotions. Although gifted with a superbly logical brain, at fifteen, Christopher's carefully constructed world falls apart when he finds his neighbor's dog, Wellington, impaled on a garden fork, and he is initially blamed for the killing. Christopher decides that he will track down the real killer and turns to his favorite fictional character, Sherlock Holmes, for inspiration. The investigation leads him down some unexpected paths and ultimately brings him face to face with a crisis within his own family. A novel that is deeply funny, poignant, and fascinating in its portrayal of a person whose curse and blessing is a mind that perceives the world literally.

Poetry Audio Recordings: A Guide to Online Resources -- Library of Congress Bibliographies, Research Guides,and Finding Aids (Virtual Programs&Services, Library of Congress) This is a guide to selected online resources for audio recordings of poets reading and discussing their work. For video recordings of poets, see Guide to Poetry & Literature Webcasts. To suggest an addition to this page, please contact the Library's Digital Reference Section. Academy of American Poets Offers hundreds of audio clips of poets reading their poems. BBC Poetry Out Loud Features 20 poems read by their authors. The Cortland Review An alphabetical list of poetry recordings available through The Cortland Review. Essential American Poets A joint project of the the Poetry Foundation and the UK-based Poetry Archive, the Essential American Poets historic audio collection, launched September 2008, will make freely available the recordings of more than 100 American poets reading their own work, selected by former US Poet Laureate Donald Hall in consultation with UK Poet Laureate Andrew Motion. From the Fishouse The Gypsy Art Show: Interviews with Poets, Writers and Musicians HarperAudio! voca