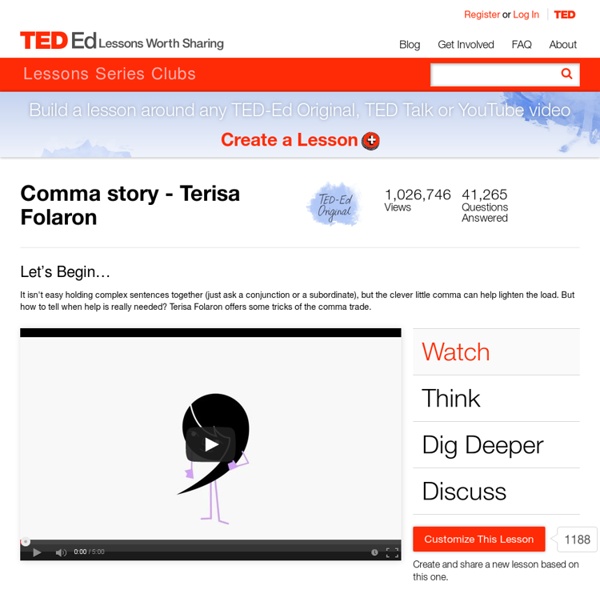 Be a better writer in 15 minutes: 4 TED-Ed lessons on grammar and word choice There’s no denying it — the English language can be mighty tricky. When writing a paper, a novel or even an e-mail, you might look at a sentence you just wrote and think, “Is that comma supposed to be there?” or “Is that really the best word to use?” Fear not! TED-Ed has put together a list of four of our favorite grammar and language lessons to get your next piece of writing in tip-top shape. First, let’s look at the often-confusing comma. What about the Oxford comma? Now, take an adjective such as “implacable” or a verb like “proliferate” or even another noun “crony,” and add a suffix, such as “-ity” or “-tion” or “-ism.” Finally, when it comes to good writing, don’t take the easy route!

Using Colons and Semi-Colons The most common punctuation marks in English are probably the period and the comma. However, good writing in English will usually make use of the colon and the semi-colon. Although these look similar and have similar names, their functions are completely different. This page will explain the functions of the colon and the semi-colon. 1. The colon A colon consists of two dots, one above the other: The colon is often used to introduce a list of items. You will need to bring three things to the party: some food, something to drink, and a small gift for the hostess. This sentence contains a list of three items. I'll tell you what I'm going to do: I'm going to quit! "Elephant (noun): a large grey mammal found in Africa and India." 2. A semi-colon consists of a comma with a dot above it: The semi-colon is often used to join together two independent clauses — in other words, it joins two clauses that could be sentences. Mary drives a Mercedes; Joanne drives a Chevrolet.

Henry Miller’s 11 Commandments of Writing and Daily Creative Routine by Maria Popova “When you can’t create you can work.” After David Ogilvy’s wildly popular 10 tips on writing and a selection of advice from modernity’s greatest writers, here comes some from iconic writer and painter Henry Miller. COMMANDMENTSWork on one thing at a time until finished.Start no more new books, add no more new material to ‘Black Spring.’Don’t be nervous. Work calmly, joyously, recklessly on whatever is in hand.Work according to Program and not according to mood. Stop at the appointed time! Under a part titled Daily Program, his routine also featured the following wonderful blueprint for productivity, inspiration, and mental health: MORNINGS: If groggy, type notes and allocate, as stimulus.If in fine fettle, write.AFTERNOONS:Work of section in hand, following plan of section scrupulously. For more of Miller’s obsessive recipes for creative rigor, dig into Henry Miller on Writing. HT Lists of Note Donating = Loving Brain Pickings has a free weekly newsletter. Share on Tumblr

Apostrophes and How to Use Them Please feel free to print and distribute this material if you find it is useful. This work is published under a Creative Commons Attribution-NonCommercial-ShareAlike 3.0 Unported License. Apostrophes are probably the most misused punctuation marks in contemporary written English. When used correctly, they enhance language by providing extra information in a sentence to better convey your meaning. When not used correctly, they can muddle your message and irritate pedants like myself. It is not widely known that there is an international siblinghood that takes note of these things and applies harsh, but just, measures when serial offenders are identified. There are two primary situations when apostrophes are used. Ownership When two words are linked through one having some sort of ownership over another the apostrophe indicates this. The girl's cat killed an alarming number of small native birds. The girl owns a cat. Using Apostrophes with Singular and Plural Words Abbreviations (Contractions)

A to X Writing Advice, Courtesy of Copy Chief Benjamin Dreyer There’s no such word as moreso.Mucus is a noun; mucous is an adjective.Nerve-racking, not -wracking; racked with guilt, not wracked with guilt.One buys a newspaper at a newsstand, not a newstand. An ordinance is a law; ordnance is ammo.Palette has to do with color; palate has to do with taste; a pallet is, among other things, something you sleep on. Eugene Pallette was a character actor; he’s particularly good in the 1943 film Heaven Can Wait.Nounwise, a premier is a diplomat; a premiere is something one attends. “Premier” is also, of course, an adjective denoting quality.That which the English call paraffin (as in “paraffin stove”), we Americans call kerosene. Copy editors should keep an eye open for this in mss. by British authors and query it. The term paraffin should generally be reserved for the waxy, oily stuff we associate with candles.Prophecy is a noun; prophesy is a verb.Per Web 11, it’s restroom.The Sibyl is a seeress; Sybil is Basil Fawlty’s wife.

Terminal Points -- The Punctuation Guide The general rule is that a sentence ends with only one terminal punctuation mark. There are three options: Period Question mark Exclamation point There are enough exceptions to this general rule, however, to warrant the following chart, which shows nearly all of the scenarios you are likely to face. Most authorities, including The Chicago Manual of Style, have traditionally rejected any situation where a question mark and an exclamation point both appear at the end of a sentence, even when such usage was logical. ​End of sentenceSentence is a statementSentence is a questionSentence is anexclamationRule: Keep the period for the abbreviation; do not add an additional period. The End of Writer’s Block: 10 Literary Laxatives — The Business of Living Writer’s block can be debilitating. Thinker’s block (e.g., analysis paralysis) can be equally as brutal. Yet comedian Jerry Seinfeld once wrote in a Reddit AMA: Writer’s block is a phony, made up, BS excuse for not doing your work. What on Earth does he mean? You are not alone. These “literary laxatives” are solutions that writers, musicians, and artists have used to get out of idea constipation and back into the swing of things. I always thought that inspiration is for amateurs. 1. History knows of many artists that used drugs to channel their creativity. Liotta: Nick Pileggi gave me I don’t know how many hours of cassettes of himself interviewing Henry Hill, and I would listen to them continuously. Pileggi: You could have given Marty and me all the drugs in Malibu, we could not have made up that dialogue. Journalists have used interviews for centuries in order to get informed about concepts, ideas, and stories they’re unfamiliar with. 2. 3. The timer forces urgency. 4. 5. 6. 7. 8. 9.

Punctuation The sentence and the full stop The full stop is the most important punctuation mark. It shows the end of the sentence. For example: The first schools in what is now British Columbia were established by the Hudson's Bay Company in about 1853 on Vancouver Island. Try this exercise: Exercise 1 The comma The comma is the most important punctuation mark after the full stop. 1. 2. 3. 4. 5. 1. Recently, the number of service enterprises in wealthier free-market economies has grown rapidly. Subsequently, the aircraft underwent numerous design changes before it was incorporated into the Type 4 jet aircraft. To visit his brother, he drove through the night. After dinner, he walked around the town. Although it might seem highly unlikely, there are considerable similarities between the male and female body. Similar feelings influenced middle-class shareholders and directors, too. When the activity of our kidneys is considered, a bed-time drink does not waken us by filling our bladders during the night. 2.

Latest Stories | Columbia Journalism Review Posted on Monday Nov 24th at 2:50pm By Merrill Perlman The colon is one of the most versatile punctuation marks (and organs). We use it to mark time (he arrived at 3:15 pm), identify the source of biblical passages (Psalms 23:4), in mathematical ratios (the horse is running at 12:1), and, of course, in Web addresses ( among many other places. It's in ordinary writing that the colon gets a bit confusing. Just as colon the organ, um, moves things along, so does colon the punctuation mark. A colon introduces a list of items, as in: "He asked Santa for a bunch of toys: Transformers, Hot Wheels, Minecraft figures, and Legos." A colon can introduce a long quotation or one of more than one sentence, because it says to a reader: "There's more coming here than you thought. A colon adds emphasis, too. Sometimes, writers will use a colon where they don't need to. In American English, to capitalize or not to capitalize is not a question of grammar: It's a question of style.

Haruki Murakami Lists the Three Essential Qualities For All Serious Novelists (And Runners) We’ve brought you a wealth of Haruki Murakami lately, and for good reason. Not only does the wildly popular Japanese novelist have a new novel out, he also has an upcoming novella, The Strange Library, a 96-page story about, well, a “strange trip to the library,” due from Knopf on December 2nd. Admirably prolific, writing roughly 3-4 novels per decade since his first in 1979, and a few collections of stories and essays, the notoriously shy Murakami took to writing somewhat late in life at age 30, and to running even later at 33. The latter pursuit gave him a great deal of material for his essay collection What I Talk About When I Talk About Running. Like other authors who write nonfiction pieces on their avocations—Jamaica Kincaid on gardening, Hemingway on hunting—in his running book, Murakami can’t help but turn his passion for fitness into a metaphor for reading and writing. Talent: Focus: Murakami-as-runner, an Economist review muses, is “if not a madman […] a very focused man.”

How to Think Up a Year's Worth of Blog Post Topics in an Hour Last November, I got my team in a room and asked them to do something that sounded nearly impossible: brainstorm a year's worth of blog topics in under an hour. That's an aggressive target -- I know -- but we needed enough titles to support the Blog Topic Generator's algorithm. So we all sat around the conference room table, writing blog ideas in a Google spreadsheet. The first five minutes, we were stumped. Sounds like a fairytale, right? Well, it's certainly not a myth. You've already got the first part covered, so keep on reading to get the process we used to come up with those few hundred titles in under an hour. 1) Come up with your first topic. This step is probably the hardest of the bunch: coming up with your very first topic. First are your customers. There are lots of ways you can get blog ideas, but these are two of the most efficient and effective ways to get them. 2) Change the topic scope. Okay, so now you have one idea. 3) Change up the timeframe. 4) Choose a new audience.

The 10 Best Short Stories You've Never Read | Arna Bontemps Hemenway One thing that's great about short stories is how quickly they can ruin your life. Maybe you start reading one over your lunch break and, if it's the right one, before that peanut butter cup you brought for dessert even has a chance to finish its melting shape-shift into some kind of sugary cement, the whole world has been destroyed around you and then rebuilt, and nothing is quite the same again. This happens whether you like it or not. Great stories practice this violent beauty on you in a variety of ways: some by making an absurd world familiar (or vice versa), some with a slow burn, some with a voice that colonizes your thoughts. The trick, then, is finding the right story, one that is capable of such a thing. In that spirit and in no particular order, here are ten short stories you might've missed that ambushed me with their odd wonder: 1. 2. Titania and Oberon, the immortal Queen and King of the Fairies, live under a hill in a modern city park. 3. 4. 5. 6. 7. 8. 9. 10.