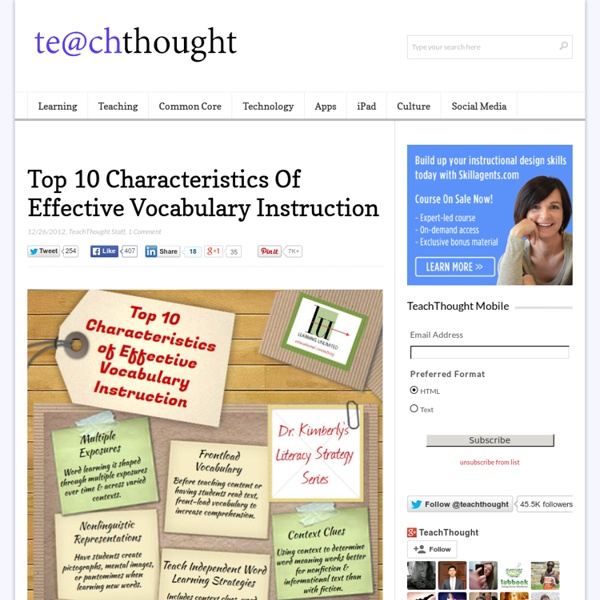 by Kimberly Tyson, Ph. D. of learningunlimitedllc.com We know that there is a strong relationship between vocabulary and reading comprehension. Systematic vocabulary instruction is an integral part of a K-12 comprehensive literacy framework for instruction. I consider it a privilege to have supported many teachers, coaches, & administrators in building a community that values word learning across classrooms and content areas. Common characteristics of effective vocabulary instruction have been documented in numerous professional journals and books. Effective vocabulary instruction across grade levels and content areas is key. As part of 12 Days: 12 Tools I have shared 4 templates and tools for vocabulary. Tool 1: Top Tips for Words WallsTool 2: Concept CirclesTool 5: Marzano’s 6-Step Vocabulary ProcessTool 7: Alphaboxes Graphic Organizer Top 10 Characteristics of Effective Vocabulary Instruction You can put this infographic to use tomorrow; several immediate uses come to mind. 1. 2. 3. 4.

English Adjectives for Describing Physical Appearance - Vocabulary for Talking About How People Look attractive - a person who is very good looking. (men and women). Attractive is a word you might use to describe someone who is very nice to look at, but who is not stunningly beautiful or strikingly handsome. Example sentence: - "Princess Diana was a very attractive woman." bald - As soon as possible. A.S.A.P. is an informal expression that is used to indicate when things need to be done really quickly. Example sentence: - "Could you finish that report for me today, please? beautiful - abbreviation for the English preposition 'before'. Online chat abbreviation for the English word 'before', a word we often use to talk about things that happened earlier than other events. We also use the word 'before' to talk about things we expect to happen sooner than other future events that are likely. blonde - textspeak for the expression 'bye for now'. 'Bye for now' is a slang expression that we use when we are saying goodbye to people we expect to see or speak to again in the near future. short - you.

W&M School of Education - Frontloading Vocabulary in Core Content Classes: Instructional Strategies Scenario: Your students begin their cultural study of ancient Sumerians. You have provided a reader's guide for individual completion by the end of the class period in preparation for a whole-group discussion the following day. You anticipate a lively discussion as you construct questions requiring critical thinking skills and application of knowledge. Thus far, your students have given no indication that confusion exists. The following day you ask the first question. What do you do? Solution: Frontloading or preteaching vocabulary is a powerful before-reading instructional strategy to facilitate comprehension of a passage. Identifying Problematic Vocabulary The first step in teaching vocabulary involves prescanning the reading assignment to identify problematic vocabulary (Coffman, 2009). Instructional Strategies to Frontload Vocabulary The Frayer Model Figure 1: The Frayer Model Strategy Choiceboards Vocabulary Cards 1.

Literacy in Social Studies, Science, and Technical Subjects: Scaffolding Levels of Text Complexity (With Discipline-based Texts) Today’s standards in Social Studies, Science, and Technical Subjects require that students comprehend and analyze complex texts and write arguments or informational papers focused on discipline-specific texts. This one-hour on demand web seminar describes strategies piloted among teams of interdisciplinary teachers, grades 6-12, who implemented reading strategies for complex texts, including primary sources, and facilitated students in conducting research to answer a question, citing evidence to make their claims. Glimpse a few activities that motivated teachers to use geoscience texts that moved from simple graphics (such as a representation of fracking fluids) to a highly scientific article on methane contamination. Discuss the role of a content specialist (geoscientist) in providing context for the readings, understanding the organizational patterns of writing for science, and approaching writing inductively. Expected Outcomes:

English Vocabulary 30 Surprising (And Controversial) Ways Students Learn Have you checked your assumptions about student learning at the door? People in general, hold onto beliefs that are shaped by early experiences, the media, and faulty influences. The following list is a compilation of research that may surprise you. Read on, and be prepared to put your traditional beliefs aside as science points to innovative methods that indicate future success. 1. Until recently, studies done with regards to children and video games usually centered on the negative impacts and consequences of prolonged use. She recognized several social motivations for playing video games including competition, a reason to hang out and casually converse with friends, and teaching peers how to play a game. In boys who struggle with stress, fear, and anger- negative emotions that can have violent consequences- video games acted as a safe alternative for the release of pent up emotion. 2. 3. 4. Patrick S. 5. Kids who garden show a better ability to concentrate. 6. 7. 8. 9. 10. 11. 12. 13.

Five Strategies to Infuse Common Core State Standards with Social Studies Instruction Posted by Herff Jones | Nystrom on Friday, June 28, 2013 · 3 Comments The Common Core State Standards are here. According to the Common Core website, there are only five states that have not yet adopted the new standards. So, what exactly, makes the Common Core standards so compelling? Well, the English Language Arts standards are organized around a series of “shifts” in thinking about pedagogy that attempt to increase the complexity of student understanding. Consider the following ideas: Shift 1: Balancing Informational Text and Literature Shift 2: Building Knowledge in the Disciplines Shift 3: Staircase of Complexity Shift 4: Text Based Answers Shift 5: Writing from Sources Shift 6: Academic Vocabulary These shifts have direct implications for the social studies classroom. Strategy 2: Spend Time Helping Students Grapple with Text Another tenet behind the English Language Arts standards is the idea that students need multiple opportunities to struggle with text. See? References

Creative ways to teach vocabulary Here is the third extract from the latest British Council publication 'Creativity in the English Language classroom' edited by Alan Maley and Nik Peachey. In this chapter, Judit Fehér gives tips to teachers on how to integrate creativity into everyday classroom practice. 'In this chapter, I aim to give tips to teachers on doing just that: to integrate creativity into everyday classroom practice and typical language learning activities and exercises. I will use a framework of thinking that is used by many teachers around the world to think about and plan their lessons, namely: Working with the language system: Presenting and practising vocabulary.Presenting and practising grammar.Improving pronunciation. Working with skills: Developing speaking.Developing writing.Developing listening and reading. With each typical classroom/course book activity discussed, I will use the following format: How is the activity normally done? Background to the activities Presenting and practising vocabulary

Kids Speak Out on Student Engagement A while back, I was asked, "What engages students?" Sure, I could respond, sharing anecdotes about what I believed to be engaging, but I thought it would be so much better to lob that question to my own eighth graders. The responses I received from all 220 of them seemed to fall under 10 categories, representing reoccuring themes that appeared again and again. So, from the mouths of babes, here are my students' answers to the question: "What engages students?" 1. "Middle-school students are growing learners who require and want interaction with other people to fully attain their potential." "Teens find it most interesting and exciting when there is a little bit of talking involved. 2. "I believe that when students participate in "learning by doing" it helps them focus more. "We have entered a digital age of video, Facebook, Twitter, etc., and they [have] become more of a daily thing for teens and students. 3. "I believe that it all boils down to relationships. 4. 5. 6. 7. 8. 9. 10.

Global Connections . Religion The Islamic tradition recognizes many of the Jewish and Christian prophets, including Abraham, Moses, and Jesus (although he is not considered to be the son of God). Many non-Muslims mistakenly believe that Muhammad is the equivalent of Jesus in the Islamic tradition; in fact, it is the Quran that stands in the same central position in Islam as Jesus does in Christianity. Muhammad himself is not divine, but a prophet chosen by God to deliver his message and an example of piety to emulate. Jews and Christians are specifically protected in the Quran as Peoples of the Book, reinforcing their spiritual connection to Islam by virtue of having been given revelations from God. The Islamic legal tradition has upheld the rights of Jews and Christians to maintain their beliefs and practices within their communities in Islamic lands, and this policy of tolerance has generally been upheld. Back to top Related sites Christians in the Middle East: ? Related maps

Three Steps for Improving Teacher Questions According to Robert Marzano's book, Classroom Instruction that Works, 80 percent of what is considered instruction involves asking questions. It makes sense then, that if we want to improve our effectiveness at teaching, of course we would start by improving our questions. I have thought a lot about this topic and I would like to share three specific actions that we can take to improve our questions. Step One The first action for improvement in reality is not an action, but a shift in thinking about our own concept of teaching. After understanding this definition of a true discussion, trying to "lead" a class discussion is a waste of effort and time, primarily because "leading" destroys the exploratory purpose of the "discussion", but also because the number of students that are able to participate in a whole-class discussion is limited to just a few. Step Two The next move is to prepare the questions you want to ask as an integral part of the lesson. Step Three

45 ways to avoid using the word 'very' Writers Write is your one-stop resource for writers. Use these 45 ways to avoid using the word ‘very’ to improve your writing. Good writers avoid peppering their writing with qualifiers like ‘very’ and ‘really’. They are known as padding or filler words and generally add little to your writing. According to Collins Dictionary: ‘Padding is unnecessary words or information used to make a piece of writing or a speech longer. Adding modifiers, qualifiers, and unnecessary adverbs and adjectives, weakens your writing. This post gives you 45 ways to avoid using the padding word ‘very’. Three Telling Quotes About ‘Very’ “Substitute ‘damn’ every time you’re inclined to write ‘very;’ your editor will delete it and the writing will be just as it should be. If you enjoyed this, you will love: Top Tip: If you want to learn how to write a book, sign up for our online course. by Amanda Patterson © Amanda Patterson