99 songs to make your homework awesome. 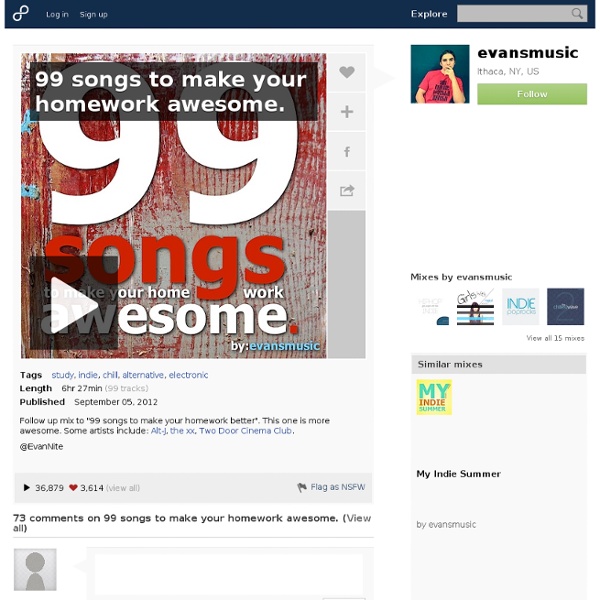 50 Creative Ways to Repurpose, Reuse and Upcycle Old Things If you’re like me, you probably have a lot of old stuff just lying around your house. It’s not doing anything but taking up space, but you’re either too busy (or lazy), sentimental or just have more important things to deal with. Well if you’re looking for a little inspiration or a new DIY project, here are 50 creative ways to repurpose, reues and upcycle old things. There’s a pretty broad range in this list but hopefully a handful jump out and spark an idea for you and your home! 1. Reuse Toilet Paper Rolls to Organize Cables and Chords 100 Ways to Discover and Enjoy Music UPDATE 12/10/13: We’ve released a follow-up to this post with 100 More Ways to Discover and Enjoy Music. Prepare yourself for another dose of Monday roundup madness! It’s time for another crazily comprehensive, yet carefully curated, look at an entire industry–the music industry to be specific.

The Beauty Of Cinemagraph GIFs Developed in 2011 by Jamie Beck and Kevin Burg, cinemagraphs are GIF images that combine still photography and video to produce a stunning effect. Typically, the entire GIF is motionless except for one or two elements, providing a brilliant juxtaposition between the motion and the motionless. For your viewing pleasure, we’ve collected 43 beautiful cinemagraph GIFs: The 10 Best Disney Songs You've Never Heard Anyone can whistle or sing their favorite Disney song, but for every ‘Under the Sea’ and ‘A Whole New World,’ there are dozens of orphaned tunes that never made it into their respective film. Too bad, since many of these unfortunate victims of time constraints or script rewrites are really catchy. However, many of these never-before-seen songs have surfaced online with their accompanying storyboards to let us sigh and wonder at what might have been. Take a look at 10 great Disney songs that were left on the cutting room floor. The creative team of 'Aladdin' had to make numerous changes to the film, including cutting many songs, characters and trimming the plot. Thankfully, several songs that were cut from the film ended up on the special edition DVD.

The 13 scariest pieces of classical music for Halloween Celebrate Halloween in macabre style with these bone-chilling masterpieces! Mussorgsky: Night on Bald Mountain The image of brooding, winged ghouls wreaking havoc on a mountain village under cover of night has terrified generations of young children in Walt Disney's Fantasia. Inspired by Russian legend, Mussorgsky's tone poem depicts the dark ritual of a witches' sabbath. www.columbia.edu/~sss31/rainbow/murphy.combat.html 1. If the enemy is in range, so are you. 2. Incoming fire has the right of way. 3.

disturbed1 Dan Donegan, guitarist for multi-platinum, Grammy-nominated hard rock band Disturbed, has unveiled his new project, Fight or Flight. Fight or Flight will release their debut album, A Life by Design? on July 23rd via Warner Bros. Records. Stumblers Who Like 50 of the World's Best Breakfasts – Written by Victoria Philpott Not quite had your fill of breakfasts just yet? Check out our beautifully visual list of the 30 best breakfasts from around the world. Plan your next culinary adventure or just get a little adventurous with breakfast at the weekend. Salivating.

Visual Culture & Jammin' in the Rain Jammin’ in the Rain Rain doesn’t have to be dreary. The Rain Drum is a beat making product that features mounted sound inputs on the exterior of an umbrella top that make different drum noises when raindrops touch it. The shade of the umbrella contains five wax-cloth coverings with varying elasticities to create a range of tones and frequencies, depending on the size and speed of the falling rain drop. Via: I Will Destroy This Robot Sheet-Music Sight-Reader, I Swear I Will Sight-reading complex musical notation takes years of training, hundreds or thousands of hours of practice, sitting in front of the piano, a metronome drilling its infernal clicks into your brain. Eventually you'll gain the ability to read and perform just about any piece of music that's set in front of you, without ever having seen it before. It does not come easily, and it is not a natural skill; you have to keep practicing to retain it.

Still Life: Bent Objects UPDATE: The Return of Bent Objects Wires transform these objects from inanimate to hilarious works of art. Little polish girl McDonalds as Sculpture Materials Find New Music We Are Hunted What the hell is everyone else listening to? We Are Hunted is a damn good looking and highly interactive music listening/discovery service that scrapes tracks from all sorts of blogs and P2P services to create emerging, mainstream, and genre-based charts. There's lots of info about artists, including tour dates, plus a Pandora-esque element to it to, allowing you to generate custom playlists based on your tastes or an artist. It's also a Spotify app, but that's irrelevant to us Canadians for the time being.

Better Guitar - Guitar Songs You Should Learn. There are certain songs that every guitar player should try to learn. Either they are commonly requested or they have cool guitar parts that will expand your playing skills. I am going to list songs in several styles of music and explain why I think they should be add to your “play list.”