How to pronounce the - English Pronunciation 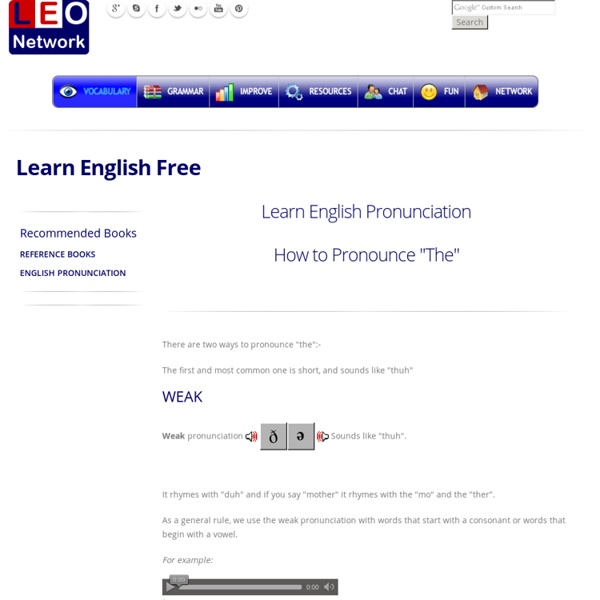 Expressions & Sayings If you prefer to go directly to the meaning and origin of a specific expression, click on its relevant entry in the alphabetical list below. Use this alphabet to speed up your search: A B C D E F G H I J K L M N O P Q R S T U V W X Y Z Learn English Online - Lesson 4 - Learn the English Alphabet Unit 1 - Lesson 4 - Writing (Aa, Bb, Cc...) The Alphabet + Names Remember It The English Alphabet Learn Listen to the Alphabet Song (British style) Vowels Consonants Now listen to the alphabet, and have a go yourself. The Rhyming Alphabet The following letters rhyme with each other ! Handwriting When you write in English you can print out your letters one at a time, which is easy to read, but can be slow, or you can use "joined up writing", also called "cursive script", which is quicker to write, but can be difficult to read if your handwriting is bad. Print your letters one at a time. or Write using cursive script. A good sentence for practising your handwriting is: "The quick brown fox jumps over the lazy dog." The quick brown fox jumps over the lazy dog. The Phonetic Alphabet You can listen to me spelling my name here:- Capitalisation ! When writing names use capital and small letters. Naturally speaking When two letters appear next to each other we say "double __" Follow the dialogue. Please and thank you !

The 50 most useful Idioms and their Meaning Commonly used Idioms Idiom: a manner of speaking that is natural to native speakers of a language Every language has its own collection of wise sayings. Smart Idioms A hot potato Speak of an issue (mostly current) which many people are talking about and which is usually disputed A penny for your thoughts A way of asking what someone is thinking Actions speak louder than words People's intentions can be judged better by what they do than what they say. Add insult to injury To further a loss with mockery or indignity; to worsen an unfavorable situation. At the drop of a hat Meaning: without any hesitation; instantly. Back to the drawing board When an attempt fails and it's time to start all over. Ball is in your court It is up to you to make the next decision or step Barking up the wrong tree Looking in the wrong place. Be glad to see the back of Be happy when a person leaves. Beat around the bush Avoiding the main topic. Best of both worlds Meaning: All the advantages. Best thing since sliced bread Cut corners

English Pronunciation - How to pronounce the letter r How to Pronounce the Letter R Open your mouth slightly. Curl the tip of your tongue back without touching the top of your mouth. The tip of the tongue should not touch the gum ridge or your teeth when pronouncing the letter R. Now try it:- Inside a word:- alert - bleary - clearly - diary - fairy - marry - sorry At the end of a word:- bear - care - dear - fear - hair - pair - rare - shore At the beginning of a word:- rack - ramp - rent - rise - right - road - rock - rook - room - root Now try these ultimate tongue twisters, and don't forget you have to keep repeating them:- Around The Rugged Rock Red Lorry / Yellow Lorry

How to Improve Your English Pronunciation “How can I improve my pronunciation?” This is one of the most common questions I am asked. I wrote this post to answer that question, and help you improve your English pronunciation! 1. There are many different kinds of English accents. American pronunciation and British pronunciation are completely different. On this website, I teach general American pronunciation. 2. The International Phonetic Alphabet (IPA) is a collection of symbols that represent the different sounds of a language. American Pronunciation:An Introduction to the IPA British Pronunciation:BBC Learning EnglishInteractive IPA Chart 3. Say it right the first time. The more times you say a word incorrectly, the harder it becomes to learn to say it correctly. For example, let’s pretend you are reading a book and you see: outrageous. Both of these dictionaries show you the IPA phonetic transcription of the word, including which syllable you must stress: /aʊtˈreɪʤəs/ 4. Try to imitate the sounds that native speakers make. 5. 6.

Homophones - English Homophones A homophone is a word that sounds like another word but has a different meaning. These homophones all have the same sound, but are spelled differently and have a different meaning: For example naval and navel:- Naval - relates to ships and things nautical A navel - also known as the belly button, it is the scar that is left in the centre of the abdomen when the umbilical cord is cut after birth. But they are both pronounced the same. You can check your answers by clicking on the 'Check Here!' All the homophones have a sound file (mp3 format), just click on the play button and the file should open in your player or your browser (depending on your system set up). Thanks to all our contributors:- Do you know any more homophones? Homophone #1 - Test It cereal serial Homophone #2 - Test It place plaice Homophone #3 - Test It tale tail Homophone #4 - Test It son sun Homophone #5 - Test It peal peel Homophone #6 - Test It toe tow Homophone #7 - Test It pair pare pear Homophone #8 - Test It altar alter pain pane ! !

Pleasure of learning new words -- ScienceDaily From our very first years, we are intrinsically motivated to learn new words and their meanings. First language acquisition occurs within a permanent emotional interaction between parents and children. However, the exact mechanism behind the human drive to acquire communicative linguistic skills is yet to be established. In a study published in the journal Current Biology, researchers from the University of Barcelona (UB), the Bellvitge Biomedical Research Institute (IDIBELL) and the Otto von Guericke University Magdeburg (Germany) have experimentally proved that human adult word learning exhibit activation not only of cortical language regions but also of the ventral striatum, a core region of reward processing. Researchers determined that the reward region that is activated is the same that answers to a wide range of stimuli, including food, sex, drugs or game. Subcortical areas are closely related to those that help to store information. Motivation for learning a second language

Speak English Well! Syllabic l and n These sounds are difficult for English learners. Many pronounce the "l" and "e" at the end of the English words "little", "uncle", "apple" as they would pronounce them in their native language, namely, as a separate syllable "le". This is an error and should be corrected. "chip". Similarly, "n" is syllabic in the words "listen" and "fasten". Listen to both syllabic consonants. The apostrophe (word stress) Most dictionaries use the apostrophe symbol (') to show word stress. Return to the top of this page. General Information on Improving your Northamerican English Accent English Accent Resources in Spanish: la Pronunciación del Inglés Other English Language Resources in Spanish: English for Spanish Speakers Spanish for Kids

How to Learn (But Not Master) Any Language in 1 Hour (Plus: A Favor) Deconstructing Arabic in 45 Minutes Conversational Russian in 60 minutes? This post is by request. How long does it take to learn Chinese or Japanese vs. Here’s the reasoning… Before you invest (or waste) hundreds and thousands of hours on a language, you should deconstruct it. So far, I’ve deconstructed Japanese, Mandarin Chinese, Spanish, Italian, Brazilian Portuguese, German, Norwegian, Irish Gaelic, Korean, and perhaps a dozen others. How is it possible to become conversationally fluent in one of these languages in 2-12 months? Consider a new language like a new sport. There are certain physical prerequisites (height is an advantage in basketball), rules (a runner must touch the bases in baseball), and so on that determine if you can become proficient at all, and—if so—how long it will take. Languages are no different. If you’re a native Japanese speaker, respectively handicapped with a bit more than 20 phonemes in your language, some languages will seem near impossible. 2. 3. 4.

Japanese Writing for Beginners General Description about Japanese writing Writing might be one of the most difficult, but also fun, parts of learning Japanese. The Japanese don't use an alphabet. Roughly speaking, kanji represents blocks of meaning (nouns, stems of adjectives and verbs) and hiragana expresses the grammatical relationship between them (endings of adjectives and verbs, particles). Katakana is used for foreign names, the names of foreign places and words of foreign origin. Confused? If you want to learn Japanese writing, start with hiragana and katakana, then kanji. To learn how to display Japanese characters on your computer, try here. Hiragana/Katakana Lessons Kanji Lessons Kanji Lessons - Try them first.Kanji of the Week - Fun lessons with pictures. Here are frequently asked questions about kanji.

Learn to Speak Japanese By Namiko Abe Updated September 16, 2015. So you want to learn how to speak Japanese, but don't know where to start? This page will direct you to where you should begin. Take your time and review all the material available. It is also very important to work on your listening practice. continue reading below our video Therefore I recommend familiarizing yourself with the sounds and rhythms of the language. I think a great way to start your journey is with some basic Japanese phrases. Try not to be overwhelmed by all the material available on my site. So, with all that in mind, let's begin to learn the language. Introduction to Japanese - Are you new to Japanese? Japanese for Beginners - Learn the basics of Japanese grammar and useful expressions. Learning Japanese Writing - There are three types of scripts in Japanese: kanji, hiragana and katakana. Pronunciation and Comprehension - It is essential to hear a native speaker when practicing pronunciation. How to contact

Is Japanese hard to learn? If looked at from a linguistic point of view, Japanese is considered one of the easier languages for a beginner to learn. It has a simple pronunciation scheme and with few exceptions a straight forward set of grammatical rules. Limitations on sentence structure are also quite minimal. The most difficult aspect of learning Japanese is the mastery of the reading and writing of kanji. An interesting characteristic of Japanese is that it is spoken differently if the speaker is a man, woman or child. There are, for example, many different words for "I", and which version you use depends under which category you fall. The Japanese are typically shy when speaking other languages. It may now seem that Japanese is a difficult language, but as is evident from the many foreigners that go to Japan, that spoken Japanese is not that difficult to learn. It is estimated that 2.3 million people worldwide studied Japanese in 2003, and the number is growing.