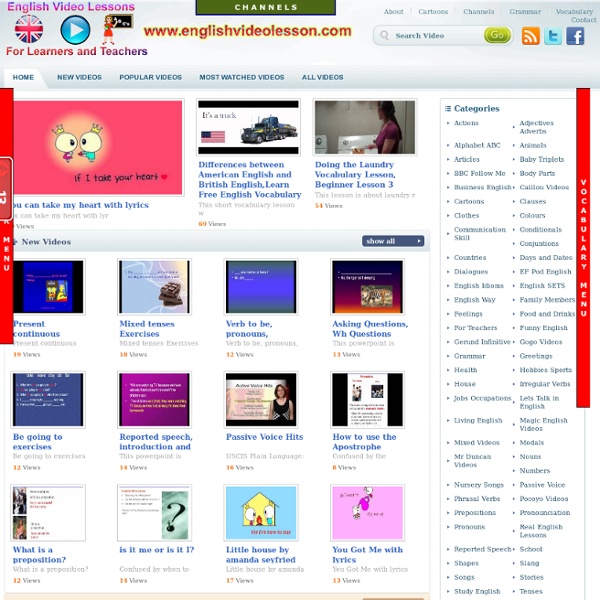 Using Silent Video in the EFL Classroom This video is the BOMB! It is captivating, absorbing, a story par excellence but also SILENT! Yes, silent films are great for getting students to produce language — and after all is said and done, that most often is the hardest thing to do, getting the students speaking and learning language by just communicating. That is our job, to get the students so absorbed in the communicative act that they forget they are learning. When we forget and are not consciously fixated on the language – we learn so much more!

Film-english This EFL lesson is designed around Head Over Heels an Oscar-nominated puppet animation directed by Timothy Reckart. Students practise using idiomatic expressions, watch a short film and talk about love and relationships. Language level: Intermediate (B1) – Advanced (C1) Learner type: Teens and adults Time: 90 minutes Activity: Exercise on body idioms, watching a short film and speaking National Virtual Language Lab ANVILL (A National Virtual Language Lab) is a speech-based toolbox for language teachers. Like the language lab console of old, it's focused on the practice of oral/aural language, but at its core are very modern web-based audio and video tools from duber dot com and the University of Oregon: Voiceboards, LiveChat, and Quizzes and Surveys. Our newest tool, TCast, allows teachers to record and place audio or video files anywhere in a lesson--in 3 easy steps. Each of these tools really opens up the scope and sequence of lessons centered around spoken language tasks. Creating media-rich lessons in ANVILL is simple and straightforward. There are templates for audio, video, and image tasks; there are also tools for text-based discussions like blogs and forums.

at the hairdresser's Image Credit: Pixabay I was asked a few weeks ago by a reader if I could write a post about hair, hairdressers and hairstyles. She needed to see her hairdresser and wanted to know how to explain what she wanted doing to her hair. I forgot my phone This EFL lesson is designed around a beautiful short film by Miles Crawford titled I lost my phone and the theme of mobile phones. Students listen to a film and speculate about what is happening, watch the film to check their answers and talk about mobile phone use. Language level: Intermediate (B1) – Upper Intermediate (B2) Learner type:Teens and adults Time: 90 minutes

Voscreen: teaching with video clips I might be a bit late to the Voscreen party as I’ve discovered this free platform a couple of months ago. I’ve been experimenting with it quite a bit and I’d like to share my 10 ideas about using it with English learners in and out of the classroom. What is Voscreen? Voscreen is a free platform (you need to sign up / log in with your Facebook account which takes 5 seconds) offering a variety of very short video clips which come from TV series, movies, songs, you name it. In each short clip, a phrase is said.

Video Lesson Framework – short animations It’s getting close to the end of the year, when it starts getting difficult for our students to maintain their motivation for English and when teachers are busier with testing and reports and the like. My students have been clamouring for a video lesson for weeks now, but I always feel as though I would be short changing them with a feature length film – so my concession to their desperate desire is the cartoon. I have in the past used this lesson framework with Tom & Jerry cartoons – they tend to be around the ten minute mark and as there’s no dialogue they work well for lower level classes and especially well with young learner classes.

Movie Segments for Warm-ups and Follow-ups: Juno: Teenage Pregnancy This is a great movie. Teenage pregnancy is dealt with in a creative, different manner. My students had a lot to say about it. Maybe This EFL lesson plan is designed around a short film called Maybe by Jgrey and the themes of daydreaming and love. Students describe a photo, speculate, write sentences using “maybe”, and watch a short film. Language level: Intermediate (B1) – Upper Intermediate (B2) Learner type: Teens and adults Randall's Video Snapshots: For ESL/EFL Students The movie clips called Video Snapshots are designed to provide additional learning content related to other listening activities on my site. To learn more about this project, read the Frequently Asked Questions below: Current Videos (Click the picture to watch the video - Click the link below the picture to visit a related listening activity). You can also search by title below:

Selected VOA Special English TV Videos The newer videos are near the top of each category. To see all the videos, go to VOA Special English TV Videos. Architecture Designing a Quake-Resistant Building Starts at the Soil Short-Film – Learn English with videos An award-winning short movie from 2014. Brothers Julio and Marvin become restless during the reading of the Passion, and begin playfully slapping one another with palms they received upon their visit to church. Unsurprisingly, their mother is not amused with their behavior. After a brief scolding, the two simmer down only for a moment before they agree to a wager with one another: who can shout "crucify him" the loudest. Once arranged, the younger of the brothers gets overwhelmed by the experience.

Better@English _Video and audio To learn to speak fluent English, you need lots of exposure to spoken language coupled with opportunities to use what you’re learning. Many learners think that going to a traditional English course is the best way to learn. But you can also learn English very well on your own, without spending a lot of money. Before you sign up for a course, why not make the most of the audio and video resources for English learning that are widely available online?