Knapsack problem. Example of a one-dimensional (constraint) knapsack problem: which boxes should be chosen to maximize the amount of money while still keeping the overall weight under or equal to 15 kg? 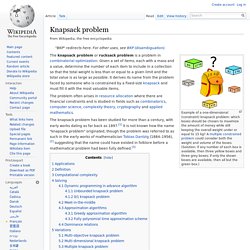 A multiple constrained problem could consider both the weight and volume of the boxes. (Answer: if any number of each box is available, then three yellow boxes and three grey boxes; if only the shown boxes are available, then all but the green box.) The knapsack problem or rucksack problem is a problem in combinatorial optimization: Given a set of items, each with a mass and a value, determine the number of each item to include in a collection so that the total weight is less than or equal to a given limit and the total value is as large as possible. It derives its name from the problem faced by someone who is constrained by a fixed-size knapsack and must fill it with the most valuable items.

Applications[edit] Definition[edit] Mathematically the 0-1-knapsack problem can be formulated as: Let there be items, 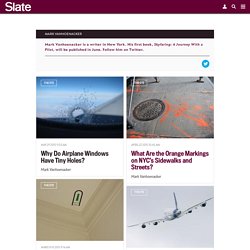 Agile Ranking. Search Algorithms with Google Director of Research Peter Norvig. Socialist millionaire. In cryptography, the socialist millionaire problem[1] is one in which two millionaires want to determine if their wealth is equal without disclosing any information about their riches to each other. 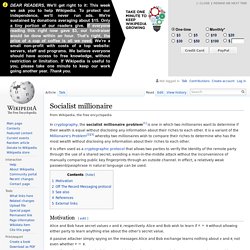 It is a variant of the Millionaire's Problem[2][3] whereby two millionaires wish to compare their riches to determine who has the most wealth without disclosing any information about their riches to each other. It is often used as a cryptographic protocol that allows two parties to verify the identity of the remote party through the use of a shared secret, avoiding a man-in-the-middle attack without the inconvenience of manually comparing public key fingerprints through an outside channel. In effect, a relatively weak password/passphrase in natural language can be used. Motivation[edit] Alice and Bob have secret values and , respectively. Without allowing either party to learn anything else about the other's secret value. , not even whether Off The Record Messaging protocol[edit] A prime, , of By as. Is it morally wrong to use adblock ? 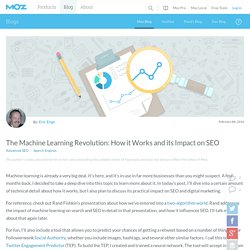 It's here, and it's in use in far more businesses than you might suspect. A few months back, I decided to take a deep dive into this topic to learn more about it. In today's post, I'll dive into a certain amount of technical detail about how it works, but I also plan to discuss its practical impact on SEO and digital marketing. For reference, check out Rand Fishkin's presentation about how we've entered into a two-algorithm world. Rand addresses the impact of machine learning on search and SEO in detail in that presentation, and how it influences SEO. For fun, I'll also include a tool that allows you to predict your chances of getting a retweet based on a number of things: your Followerwonk Social Authority, whether you include images, hashtags, and several other similar factors. My machine learning journey Basically, they looked at all the language translations they could find across the web and learned from them. 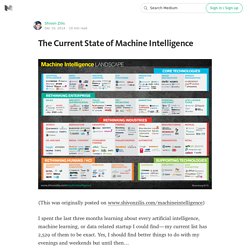 Yes, I should find better things to do with my evenings and weekends but until then… Benmccormick.org. Lumiverse. Neural Networks Demystified. 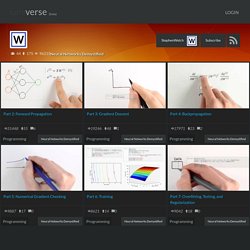 21 hot programming trends. Programmers love to sneer at the world of fashion where trends blow through like breezes. 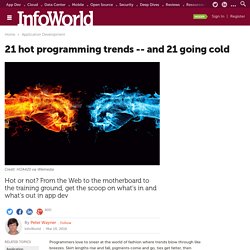 Skirt lengths rise and fall, pigments come and go, ties get fatter, then thinner. But in the world of technology, rigor, science, math, and precision rule over fad. That's not to say programming is a profession devoid of trends. The difference is that programming trends are driven by greater efficiency, increased customization, and ease of use. The new technologies that deliver one or more of these eclipse the previous generation. What follows is a list of what's hot and what's not among today's programmers. Hot: PreprocessorsNot: Full language stacks It wasn't long ago that people who created a new programming language had to build everything that turned code into the bits fed to the silicon. The scripting languages like Python or JavaScript were once limited to little projects, but now they’re the foundation for serious work.