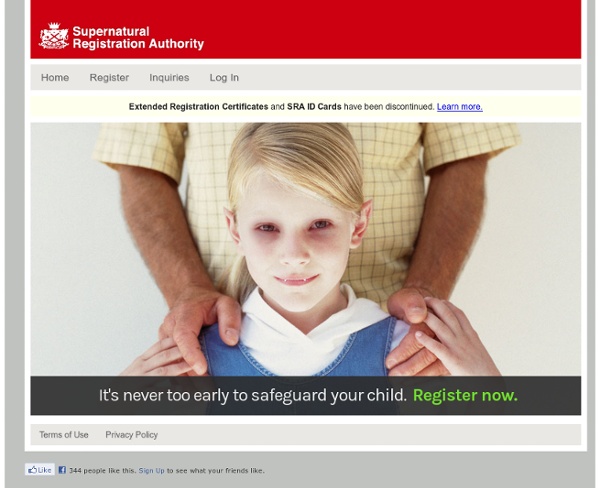 A physical copy of your registration document proves your status | Supernatural Registration Authority All supernatural entities registered with the SRA enjoy the same benefits and protections. However, those that have physical proof of their registration suffer fewer disruptions of their daily lives. The physical document provided by the SRA (for a $5.00 fee) contains a QR code that is instantly scannable by SRA agents. Your identity and registration status can be confirmed in moments, instead of the minutes or hours it can take to detain you, obtain fingerprints or a retinal scan and manually confirm your status. Don't take a chance. As of January 1st 2012, the Supernatural Registration Authority has discontinued accepting payments via PayPal. QR Code for Quick Access Your registration document contains a unique QR code that, when scanned, will display your SRA Public Profile. Not Registered Yet? You can quickly and easily order a physical copy of your documentation during your registration process . Already Registered?

Yummly raises $1.85M for semantic recipe searches Pushing forward with the trend for more and more narrow search technologies, Yummly has raised $1.85 million for its semantic search and recommendation platform for doing queries on recipes. The Palo Alto, Calif.-based company makes the task of finding recipes simpler and more personal. David Feller, co-founder and chief executive of Yummly, said the company will use the money to expand its services. He said the company employs a cornucopia of algorithms to help it understand more than 15,000 food ingredients on a variety of levels (from nutritional value to taste). The seed round of funding came from First Round Capital, Harrison Metal Capital, Intel Capital and angels. With its focus on doing search for one particular thing, Yummly resembles other successful sites such as Pandora Radio (songs) and Netflix (movies).

The Most Insane Search Suggestions Ever Seen On Google We probably shouldn't be surprised by anything people Google at this point, considering we all rely on it for everything short of brushing our teeth for us. But these search suggestions are almost as insane as using Bing. Updated 10/13/11: Google has 2,076 job openings – Tech Products & Geek News If you have the talent and the enthusiasm there is no better time to apply for a job at Google. Not only has the company just raised its salaries for employees, but Reuters did some calculations and found there are 2,076 open positions. The number of jobs available is not through any mass exodus from Google to Facebook. Google is just ramping up on hiring which has seen the positions available increase six-fold over the course of this year. Google may already have over 23,000 employees, but it is still expanding and needs more staff for its core areas such as advertising, Android, and web services. Read more at Reuters Matthew’s Opinion Google’s job pages are well laid out into sections making it quite difficult to get an overall picture of just how many positions are open. The sheer scale of Google’s business, plus their continued need to grow, suggests they do need that many new people.

Anonymous Wants To Destroy Facebook Anonymous, the shady-yet-principled hacktivist group that has previously hacked into Iran's government emails, the Pentagon, possibly the IMF, News Corp, Anders Breivik's Twitter account, and much more, has a new target in its crosshairs: Facebook. The hackers have set the date for Facebook's demise as November 5, 2011. The reason? Ironically, they're worried about privacy. Full text of their press release after the jump. DATE: November 5, 2011. "Kill Facebook for the sake of your own privacy" -- doesn't that sound strange, coming from people who routinely steal private information as they please? Do you think every hacker announces everything they've hacked? Will Anonymous be able to successfully lay waste to Mark Zuckerberg's fortress? Previously: Anonymous Hacker Arrests Include 16-Year-Old Girl and Ex-Resident of Williamsburg: 'Faces of Domestic Terrorism' Anonymous Members Raided By FBI; Hacker Group Claims to Have News Corp Emails [rgray@villagevoice.com] [@_rosiegray]

The 5 Most Profitable Drugs: They Never Cure You In this week's cover story, writer Keegan Hamilton investigates the controversy surrounding ibogaine, the experimental hallucinogen drug that has helped kick meth and heroin addictions. Ibogaine is illegal, even though its power to cure addicts has been proven. Hamilton's story describes the many reasons the medical establishment and the government are wary of Ibogaine, despite its benefits, but one of them really stood out: Because Ibogaine is an outright cure, drug companies want nothing to do with it. Martin Kuehne, a chemist at the University of Vermont, is quoted in the story, saying, "Pharmaceutical companies don't like cures. When we read that, a light went on. So, with that in mind, we thought we'd test Kuehne's theory, and look at the five most profitable drugs in the United States. Guess what they all have one in common? 4) Advair Diskus (2009 gross revenue: $4.7 billion): For asthma sufferers, a twice-daily inhaler to reduce the swelling in your respiratory system.

Gajitz | Awesome Gajitz, Weird Science & Futuristic Technology Playing Tetris Reduces Post-Traumatic Stress Disorder Flashbacks Classic video game Tetris may be capable of providing a service beyond entertaining the gaming masses. According to a new study out of Oxford University, playing Tetris a few hours after trauma exposure can help prevent flashbacks, which are typically a symptom of post-traumatic stress disorder. The study, published in the journal PLoS ONE, is based on two experiments. In the first experiment, 60 participants watched a film containing scenes of injury and death. After a 30-minute structured break, 20 participants played Tetris, while another 20 played quiz video game Pub Quiz. The second experiment extended the break period from half an hour to four hours — even then, Tetris players experienced fewer flashbacks than the other research subjects did. According to the researchers, chronic trauma flashbacks are usually made up of sensory, visual images. As the researchers point out in their report, these verbal tasks "may serve to increase (rather than reduce) later trauma flashbacks."