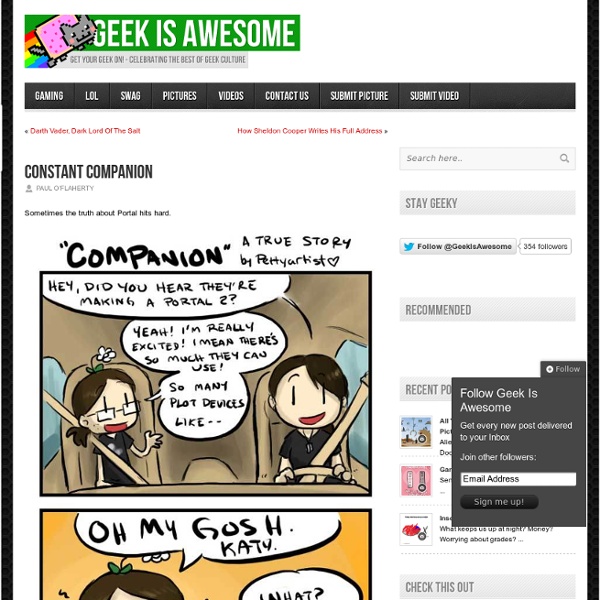 50 Lessons Life Taught Me To celebrate growing older, I once wrote the 45 lessons life taught me. It is the most-requested column I’ve ever written. When my odometer rolled over to 50, I updated the list. Here it is: Life isn’t fair, but it’s still good.When in doubt, just take the next small step.Life is too short to waste time hating anyone.Don’t take yourself so seriously. 198 by Howie Noel I will admit right up front: I’ve never watched Doctor Who. As a kid, it used to come on in the afternoon right after Transformers and the opening terrified me. So generally speaking, I avoided the doctor until this explosion of Who popularity caught me off guard a few years ago. And its everywhere! Suddenly, every website, message board and convention is awash with Dr. I can admit, the idea of the show is brilliant. I suppose one day I will get into the newer Doctor Who series (the English girl in my employ at The 4th Wall is very insistent) but for now, I will simply feign outrage that a Yankee is putting words in the Doctor’s mouth. “The Shame!” And so on. Today’s page has been brought to us Dalek-free by Howie Noel: Howie Noel is the writer and artist of the online comic Tara Normal, which also appears in every issue of TAPS Paramagazine, the official magazine of the crew from TV’s Ghost Hunters. -Moss

25 Stunning HDR Wallpapers Credits (not in order): Trey Ratcliff, Others remain Unknown. If you are the owner or know the owner of any of theses HDR wallpapers, Please let us know. You are free to download these photos and enjoy them but you may not use them commercially. The copyright belongs to the respective photographers. 201 by Mohammad F. Haque Be All You Can Be Moss — October 11th, 2011 Before we begin, i want to mention that Sohmer, Lar, Rich and the boys, as well as several Gutters artists (past, present and future) will be attending New York Comicon this coming weekend. The guys will have all the Gutters books, mousepads, lanyards and laughs that you can shake a stick at over at the Blind Ferret Booth, which is #1821. I would also like to say for the record that I am in no way jealous that they are attending NYCC in beautiful New York City and I would encourage every last one of you to stop by the booth kick them in the shins– er, stop by for a hug and a chat. So, if you’re there be sure and enjoy yourself twice as hard for me! Now, on to other matters. There is no one in the world that likes some good cosplay more than I. When it comes to Pheonix Jones and other “real life” superheroes however… all I can feel is a signifcant amount of worry. Seriously guys, I’m begging you. /Plea Hawk, more formally known as Mohammad F. -Moss

It’s Not My Fault… Ironically enough I actually had my ass handed to me, during a few rounds of Fruit Ninja, by my rotund friend at Intervention the weekend before last. Personally, I do not own a Kinect. Nothing so far about this peripheral has screamed “must have” for me yet. Fruit Ninja did come close, but I don’t feel that’s reason enough to drop $120+ on the device. I know there’s a lot more excuses people claim for why they lost. February 25, 2011 | Rhymes With Orange Share Leave a Reply Your email address will not be published. Required fields are marked * You may use these HTML tags and attributes: <a href="" title=""><abbr title=""><acronym title=""><b><blockquote cite=""><cite><code><del datetime=""><em><i><q cite=""><strike><strong> Search Blog Follow Me! Recent Posts Recent Comments Archives

500x_click_click_click_comic.jpg (JPEG Image, 500 × 372 pixels) The 48 Laws of Power Background[edit] Greene initially formulated some of the ideas in The 48 Laws of Power while working as a writer in Hollywood and concluding that today's power elite shared similar traits with powerful figures throughout history.[5] In 1995, Greene worked as a writer at Fabrica, an art and media school, and met a book packager named Joost Elffers.[4][8] Greene pitched a book about power to Elffers and six months later, Elffers requested that Greene write a treatment.[4] Although Greene was unhappy in his current job, he was comfortable and saw the time needed to write a proper book proposal as too risky.[10] However, at the time Greene was rereading his favorite biography about Julius Caesar and took inspiration from Caesar's decision to cross the Rubicon River and fight Pompey, thus inciting the Great Roman Civil War.[10] Greene would follow Caesar's example and write the treatment, which later became The 48 Laws of Power.[10] He would note this as the turning point of his life.[10]

25 Great Calvin and Hobbes Strips. Why Bill Watterson is our hero. We've re-launched Progressive Boink, friends! Our new front page is here. Hope you enjoy. Hundreds of comic strips have been published in newspapers. And it's really a shame that it's so difficult to quantify this strip's greatness. Calvin and Hobbes ran from 1985 to 1995. "Virtue needs some cheaper thrills." © Universal Press Syndicate Calvin is an unbelievably intelligent six-year-old. It's kind of refreshing to see a strip that doesn't feel the need to have an uplifting message, or feel like it needs to point out that it's mean to whack an innocent person upside the dome with a snowball. - Jon "He's one of the old gods! One of the top classic Calvin strips. - Bill "You've taught me nothing except how to cynically manipulate the system." Pretty much the voice of Bill Watterson dictating the current state of our school systems. - Nick "We prefer your extinction to the loss of our job." Hobbes' bizarre reply is the icing on the cake. - Jon "It's psychosomatic.

Metamophing Computer Interfaces Metamophing Computer Interfaces Siafu is a PC designed to give people with vision loss or impairment a more intuitive computer experience. It lays flat like a tablet and allows the user to fully interact with it by way of touch. The technology behind Siafu – Magneclay, is an oil based synthetic agent that possesses limitless morphing capabilities. As for why the device is named after an aggressive African ant? Designer: Jonathan Lucas Siafu’s magneclay surface can generate full spread braill layouts, allowing users to enjoy reading digital content in a large book style relief. The surface of Siafu can form a working 9-button braille keyboard. Siaufu also possesses a built-in microphone, which provides an alternative to typing. Siafu has the ability to display screen images such as web pages in a bas relief. Siafu utilizes 2-D to 3-D image conversion technology to process screen images.