When Audi started a war to BMW.... 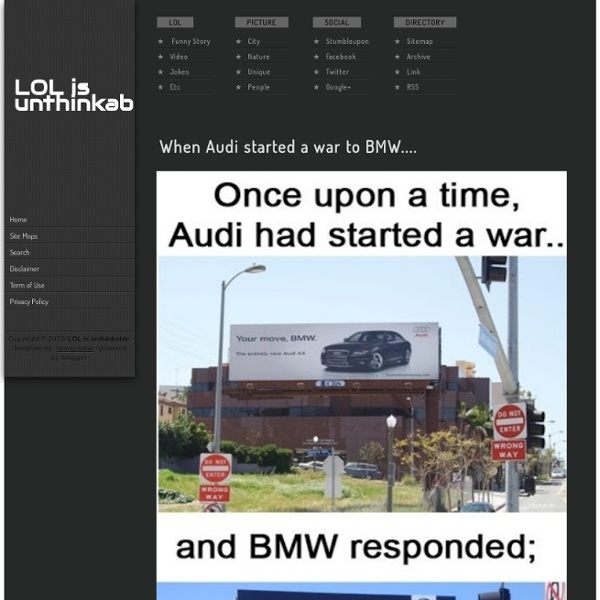 All The Amusing Stuff » Rude Hand Gestures of the World Rude Hand Gestures of the World by Romana Lefevre is a photographic guide to the many ways of using hand gestures to offend people in different parts of the world. The book’s photography is by Daniel Castro, and published by Chronicle Books of San Francisco. A hand gesture is arguably the most effective form of expression, whether you’re defaming a friend’s mother or telling a perfect stranger to get lost. Learn how to go beyond just flipping the bird with this illustrated guide to rude hand gestures all around the world, from asking for sex in the Middle East to calling someone crazy in Italy. Detailed photographs of hand models and subtle tips for proper usage make Rude Hand Gestures of the World the perfect companion for globe-trotters looking to offend. Also see: Illustrated Guide to Italian Hand Gestures Chin Flick Meaning: Get lost Used in: Belgium, France, Northern Italy, Tunisia Note: In Italy, this gesture simply means “No.” Idiota Meaning: Are you an idiot? Used in: Brazil Moutza Corna

How to Build a Universe That Doesn't Fall Apart Two Days Later First, before I begin to bore you with the usual sort of things science fiction writers say in speeches, let me bring you official greetings from Disneyland. I consider myself a spokesperson for Disneyland because I live just a few miles from it — and, as if that were not enough, I once had the honour of being interviewed there by Paris TV. For several weeks after the interview, I was really ill and confined to bed. I think it was the whirling teacups that did it. Science fiction writers, I am sorry to say, really do not know anything. It reminds me of a headline that appeared in a California newspaper just before I flew here. Well, I will tell you what interests me, what I consider important. In 1951, when I sold my first story, I had no idea that such fundamental issues could be pursued in the science fiction field. Finally, in the story, the dog begins to imagine that someday the garbagemen will eat the people in the house, as well as stealing their food. What could explain all this?

English language learning games ESL/English learning games on Digital Dialects are completely free to use, do not require registration, and are designed for ESL students of all ages. Each ESL revision topic includes vocabulary lists and practice games with audio for teaching correct pronunciation. Materials are of use to beginner level English as a second or other language students, though those with some familiarity with the language may wish to try the English/ESL spelling games. How I Learned the Truth about the State - Stefano R. Mugnaini I'll never forget my last visit to lovely Hinesville, Georgia. For it was there that I learned a valuable lesson, one I shall never forget: in a police state, we're all criminals. Think about it — how many laws have you broken today? This week? In Hinesville, I was accosted for "animal cruelty." The older of my two daughters had a rash, so we stopped at Walmart to get her some antihistamine cream. You see, we left the dogs in the car, with the windows down and a dish of water to drink. I was informed that I was being charged with criminal animal cruelty, subject to appear in court at a later date. The officer informed me that I was going to have to take the dogs to the vet to be checked out before we were allowed to continue on our way. I tried another tactic. "At what point," I asked, "was I in violation of the law?" He couldn't answer, but the heroic policeman — let's just call him "Vic Maldonado" — sprang into action. I was cuffed and escorted to the back of the squad car.

Do this to make your loved one smile Useful Ideas and Layouts to Create a Photo Gallery Wall My most popular post to date that you, my awesome readers, just swoon over is how to create a photo wall display. This post alone has received well over 70,000 views and today I’m sharing even more great ideas and layouts to create your own photo gallery wall. Knowing where to begin when creating a montage of photos can often be intimidating, so I’ve gathered some handy examples on how to find the right balance and layout for various sized photos in all the different areas of the home. Here comes a long post with alot pictures, but it’ll be worth scrolling all the way through… Staircase, gallery wall, and ledge display ideas by Brenda Knight Photography Gallery wall ideas via Pottery Barn Photo and wall decor ideas via One Click Design Studio I really like the asymmetrical foyer photo layout. Room vignettes with photo gallery ideas via RobinWood Photography Wall Display Templates by Gradybug Designs Lots of display ideas – source unknown Gallery Wall idea by Jen of World of Dennifer

729; That’s Where It Is I went to lunch today at a new market-slash-sandwich place that just opened in my neighborhood. It was really good! The market (and neighborhood) is the type to offer fancy organic cold-pressed juice for eleven dollars and artisanal almond milk that comes in something that looks like baby food jars, so when I got this fork to eat my side salad with, at first I wasn’t sure if it was something exotic and fancy: I used the strange fork to eat my salad and was pleased to find that it worked really well! I went up and asked the guy behind the counter if all his forks were like this, and he laughed and assured me they were not. I went back to work with my head spinning. Had I been struck by the sort of coincidental circumstance that led to the invention of Post-Its, Kellogg’s Corn Flakes, and representative democracy?? I began to search the patent records. REVOLVING SPAGHETTI FORK, Patent US2602996 A, 1952 SERRATED FORK, Patent Application US20130152403 A1, 2011 Look at that thing.