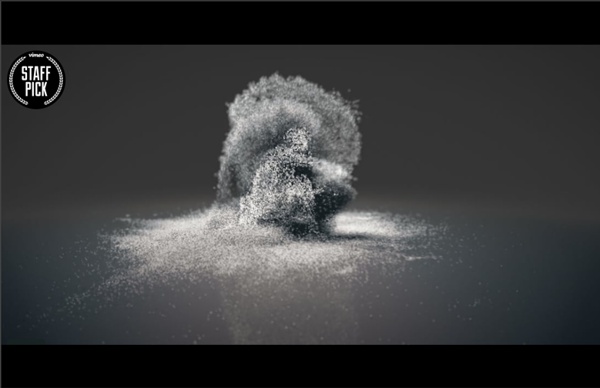 3D Facial Projection Technology Creates Digital Skin Using computer graphics and facial projection and tracking technology, Nobumichi Asai creates a new art form of facial tattoos, where digital makeup transforms a human face into a masterpiece of computer graphics. Makeup has the transformative ability to make a face beautiful, alluring, sexy, clownish or creepy. As the art of makeup moves into the digital age, it won’t be long before people can use 3D facial projection technology to paint faces with anything from tiger stripes and leathery snakeskin, to exploding waterfalls and erupting bouquets of flowers. The experimental art of facial projection by Japanese artist and scientist Nobumichi Asai turns the human face into a canvas of the imagination. The curves and features of the face become an irresistible landscape for animated, kaleidoscopic images.

Asphyxia: A Striking Fusion of Dance and Motion Capture Technology Asphyxia is an experimental film project by Maria Takeuchi and Frederico Phillips that explores human movement through motion capture technology. The team used two inexpensive Xbox One Kinect sensors to capture the movements of dancer Shiho Tanaka and then rendered the data inside a near photo-realistic environment. From their description of the project: The project is an effort to explore new ways to use and/or combine technologies and different fields in an experiment without many of the common commercial limitations.

Plants Of The Gods: Their Sacred, Healing, And Hallucinogenic Powers (978-0-89281-979-9) Quality Paperback — 11/1/01 Page Count: 208; 7.75 (width) x 10.50 (height) 400 color and b&w illustrations onformative – ANIMA iki Fluid shimmering patterns flow around a luminescent orb suspended in space as tones oscillate in the room. »ANIMA« is an entity that modifies sound and visuals as it reacts to and forages in its environment. This continuous exchange between viewer and sculpture unites them in a perpetual discourse through an interactive soundscape and visuals. »ANIMA« is a sculptural installation developed to explore the relationship between itself and its surroundings through the use of movement, texture, light and sound. The installation consists of a giant glowing sphere measuring two meters in diameter. This larger-than-life entity is suspended from the ceiling, as if in mid-air, in a darkened room.

Coding and Choreography Combine in This Dynamic Dance Performance Pathfinder from princemio on Vimeo. What do Kandinsky and breakdancing have in common? The answer may be Pathfinder, a generative visual language that continuously stimulates creativity during real-time choreography. Using the same primitive geometric forms that lie at the heart of Kandinsky’s “Point and Line to Plane” as a starting point, the tool follows a troupe of dancers and transforms their movements into points, lines, planes and 3D models as they transform their bodies into different shapes. “The dancer imagines lines, patterns or abstract processes in order to improvise a physical interpretation of those,” explains princeMio labs, who developed the work in collaboration with onformative studio. “Pathfinder is intended to be a part of this process, by continuously generating geometric shapes in order to inspire the dancer.”

Encyclopedia Of Psychoactive Plants: Ethnopharmacology And Its Applications (978-0-89281-978-2) Browse Our Book About The Encyclopedia of Psychoactive Plants The most comprehensive guide to the botany, history, distribution, and cultivation of all known psychoactive plants • Examines 414 psychoactive plants and related substances • Explores how using psychoactive plants in a culturally sanctioned context can produce important insights into the nature of reality • Contains 797 color photographs and 645 black-and-white illustrations Dance x Multimedia Series has dancers interacting with technology DANCE X MULTIMEDIA SERIES Various venues Three international dance groups will offer their own take on a popular art form that combines technology and multimedia in the "Dance x Multimedia Series". This month, Taiwan's Anarchy Dance Theatre, Britain's Motionhouse, and MIDASpaces from Ireland will stage their multisensory shows in the city at the invitation of the Leisure and Cultural Services Department. The beauty of these cross-genre productions lies in the boundless possibilities, says MIDASpaces, which stands for "mapped, interactive and digitally augmented spaces".

Kinect for Windows Architecture Kinect for Windows 1.5, 1.6, 1.7, 1.8 The SDK provides a sophisticated software library and tools to help developers use the rich form of Kinect-based natural input, which senses and reacts to real-world events. The Kinect and the software library interact with your application, as shown in Figure 1. Inner Paths To Outer Space: Journeys To Alien Worlds Through Psychedelics And Other Spiritual Technologies (978-1-59477-224-5) Browse Our Book About Inner Paths to Outer Space An investigation into experiences of other realms of existence and contact with otherworldly beings • Examines how contact with alien life-forms can be obtained through the “inner space” dimensions of our minds Watch Projection-Mapped Kung Fu Between a Man and His Shadow Projection-mapped choreography meets Enter the Dragon in Pixel n' Pepper's new performance at the Hamdan International Photography Award in Dubai, Black & White. A dancer enters the stage seemingly alone, but is soon challenged to a kung fu battle royale by his own digital shadow, and things only escalate from there. A second dancer gets involved, turning the show into something like a live episode of Dragonball Z, animated by MC Escher and directed by Bruce Lee.