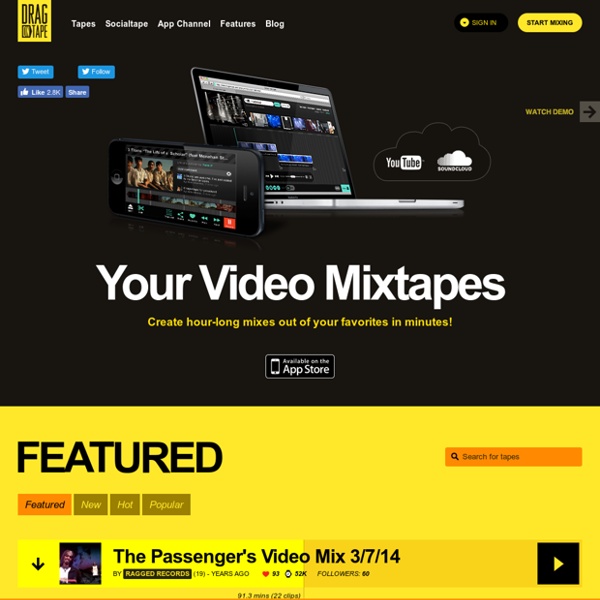 Timeline Home › Parent & Afterschool Resources › Games & Tools Tool Why Use This Tool Here's What To Do 15 Fun classroom energizers for students. Children are busy people. But when it comes to school they just freeze. They have to sit still for a long time and that’s why they get tired. The songs of summer Memorial Day Weekend fills us with restless anticipation of how we will spend the long, hot days ahead, but it also brings fond memories of summers past, each one marked by a ubiquitous song that still has the power to bring us back to that time. Travel through the last 100 years to discover which summer songs were either released or peaked in popularity during the summer of their respective years. Some are about the summer or the stuff of summer: parties, picnics, fleeting love, nostalgia or fun.

ProShow Producer Download Now Secure Download Download Editors' Rating: Editors' Rating: Why is Christianity the only way? By Michael L. Brown Isn’t it the height of arrogance to claim that the only way people can come into right relationship with God is through Jesus? At first blush, the answer would seem to be yes. Create an animation online with ABCya! Animate ABCya is the leader in free educational computer games and mobile apps for kids. The innovation of a grade school teacher, ABCya is an award-winning destination for elementary students that offers hundreds of fun, engaging learning activities. Millions of kids, parents, and teachers visit ABCya.com each month, playing over 1 billion games last year. Apple, The New York Times, USA Today, Parents Magazine and Scholastic, to name just a few, have featured ABCya’s popular educational games. ABCya’s award-winning Preschool computer games and apps are conceived and realized under the direction of a certified technology education teacher, and have been trusted by parents and teachers for ten years. Our educational games are easy to use and classroom friendly, with a focus on the alphabet, numbers, shapes, storybooks, art, music, holidays and much more!

10 Ways to Use Google Maps in the Classroom By Jessica Sanders Google Maps is a great free tool for teachers to engage students. They’ll love mapping major novel moments, guessing locations based on clues, and investigating cities around the world. More: 20 Best Google Education Resources Create a Custom Map Most underrated songs by the most overrated artists. Songs for when you’re stuck in the friend zone… Requested by Big Teddy Bear · Compiled by BFFE Man, do I know the feeling. 01. Shelly Terrell “Put it before them briefly so they will read it, clearly so they will appreciate it, picturesquely so they will remember it and, above all, accurately so they will be guided by its light.” —Joseph Pulitzer Transform your young language learners into classroom reporters. Our students can learn by reading current events and news articles. They can also act as journalists who write short news articles.

To Believe : Fulfilled Prophecy: Evidence for the Reliability of the Bible (The remaining 500 or so reach into the future and may be seen unfolding as days go by.) Since the probability for any one of these prophecies having been fulfilled by chance averages less than one in ten (figured very conservatively) and since the prophecies are for the most part independent of one another, the odds for all these prophecies having been fulfilled by chance without error is less than one in 10 2000 (that is 1 with 2000 zeros written after it)! God is not the only one, however, who uses forecasts of future events to get people's attention. Satan does, too. Through clairvoyants (such as Jeanne Dixon and Edgar Cayce), mediums, spiritists, and others, come remarkable predictions, though rarely with more than about 60 percent accuracy, never with total accuracy.

3D Graffiti Creator - Make 3D graffiti texts, effects, logos, names, letters and banners online It's the most versatile and customizable 3D graffiti editor online. By using this free graffiti text generator, you can design cool 3D graffiti letters, names and banners with the best graffiti fonts available. When using this free graffiti text editor to design an online graffiti writing or word art, you can choose among many cool graffiti styles to produce high quality graffiti logos with your name, message, slogan, or any graffiti words or letters you need to your header, title, cover, page, blog, site, app, game, software interface, party, event, Facebook, Twitter, social image, wallpaper, graphic design, image composition or whatever you want. Using a so configurable online graffiti text editor can be a little tricky. If you are a new user, spend some moments reading the tips below. They can be very useful to help to learn how to use this cool graffiti creator.

10 Ways to Save Time Grading With Google By Lynn Erickson We all know that time is of the essence in the teaching world. In many instances, we spend quite a bit of our time grading student work. With many online tools at our fingertips, grading student work doesn’t have to be as time consuming as it was in the past. Below are some ways you can save time grading with the G Suite for Education. The Lost Art of the Mixtape — Cuepoint I spend a lot of time wishing that the cassette tape would make a comeback. There was a lot to love about cassettes, not the least of which was making mixtapes. While the phrase “mixtape” is still around, it’s come to mean something different, something other than the long lost tradition of meticulously recording song after song off of albums and the radio in order to make a perfect musical love letter. The art — and make no mistake about it, it is an art — of making a mixtape is lost on a generation that only has to drag and drop to complete a mix.