God's Wife Edited Out of the Bible 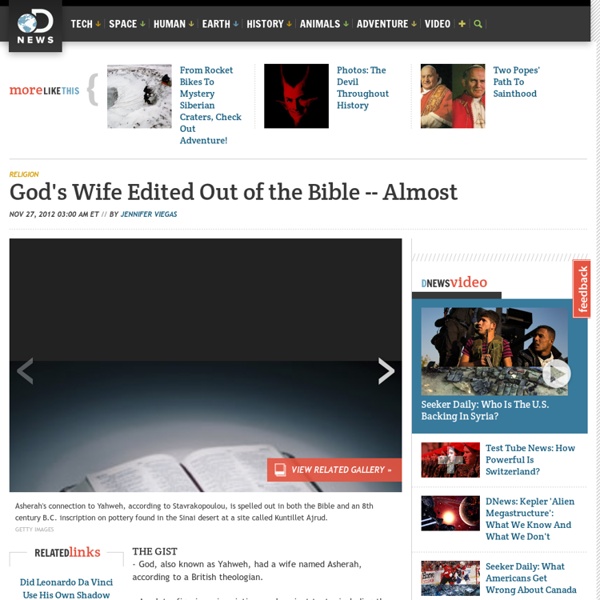 - God, also known as Yahweh, had a wife named Asherah, according to a British theologian. - Amulets, figurines, inscriptions and ancient texts, including the Bible, reveal Asherah's once prominent standing. God had a wife, Asherah, whom the Book of Kings suggests was worshiped alongside Yahweh in his temple in Israel, according to an Oxford scholar. In 1967, Raphael Patai was the first historian to mention that the ancient Israelites worshiped both Yahweh and Asherah. Information presented in Stavrakopoulou's books, lectures and journal papers has become the basis of a three-part documentary series, now airing in Europe, where she discusses the Yahweh-Asherah connection. "You might know him as Yahweh, Allah or God. NEWS: Jesus' Great-Grandmother Identified "After years of research specializing in the history and religion of Israel, however, I have come to a colorful and what could seem, to some, uncomfortable conclusion that God had a wife," she added.

The Dark Bible: History The Dark Bible Back To Table Of Contents The stories of the Bible evolved slowly over centuries before the existence of orthodox religions. Virtually every human civilization in the Middle East, before and through Biblical times, practiced some form of female goddess worship. The Old Testament consists of a body of literature spread over a period from approximately 1450 B.C.E. to 200 B.C.E. The New Testament has even fewer surviving texts. Interestingly, there existed many competing Christian cults in the early years after Jesus' alleged death. So the idea of the Bible as a single, sacred unalterable corpus of texts began in heresy and later extended and used by churchmen in their efforts to define orthodoxy. There has existed over a hundred different versions of the Bible, written in most of the languages of the time including Greek, Hebrew and Latin. At around 405 C.E. (One might wonder what will happen to the "new" revisions a few hundred years from now.

Cuneiform law Cuneiform law refers to any of the legal codes written in cuneiform script, that were developed and used throughout the ancient Middle East among the Sumerians, Babylonians, Assyrians, Elamites, Hurrians, Kassites, and Hittites.[1] The Code of Hammurabi is the most well-known of the cuneiform laws, but there were a number of precursor laws.[1] Features[edit] Although they were written in several different cities and kingdoms, these early laws have a number of formulae in common. Most contain both an epilogue and a prologue, which usually explain the purpose of composing the laws, invoke divine authority, and command the reader to abide by them. They are always imposed or 'enacted' in the name of a ruler, be it a prince or king, and show no sign of being the result of legislative bodies. Unlike modern codes, Cuneiform law provides no universal formula for general areas of law. Timeline[edit] Gallery[edit] An inscription of the Code of Hammurabi. See also[edit] References[edit]

Comparing the Genesis and Babylonian stories of creation Evolution vs. creationism. Bible topics & stories. Sponsored link. Creation stories from the ancient Middle East: Walter Reinhold Warttig Mattfeld y de la Torre writes that one of his articles: "... is an attempt to briefly identify some of the Ancient Near Eastern Motifs and Myths from which the Hebrews apparently borrowed, adapted, and reworked in the Book of Genesis (more specifically Genesis 1-11).It is my understanding that Genesis' motifs and characters, God, Adam, Eve, the Serpent, and Noah, are adaptations and transformations of characters and events occurring in earlier Near Eastern Myths. He quotes W.G. "The authors of ancient cosmologies were essentially compilers. De la Torre concludes that Genesis 1-11: "... appears to be a reformatting of motifs and characters from four Mesopotamian myths: Of these four sources, Enuma Elish has the closest parallels with the first creation story in Genesis. Also: The Babylonian creation story is called by its first two words "Enuma Elish." H.C.

Code of Hammurabi The Code of Hammurabi is a well-preserved Babylonian law code of ancient Iraq, formerly Mesopotamia, dating back to about 1772 BC. It is one of the oldest deciphered writings of significant length in the world. The sixth Babylonian king, Hammurabi, enacted the code, and partial copies exist on a human-sized stone stele and various clay tablets. The Code consists of 282 laws, with scaled punishments, adjusting "an eye for an eye, a tooth for a tooth" (lex talionis)[1] as graded depending on social status, of slave versus free man.[2] Nearly one-half of the Code deals with matters of contract, establishing, for example, the wages to be paid to an ox driver or a surgeon. One nearly complete example of the Code survives today, on a diorite stele in the shape of a huge index finger,[4] 2.25-metre (7.4 ft) tall (see images at right). History[edit] Code on clay tablet Code on diorite stele Hammurabi ruled for nearly 43 years, ca. 1792 to 1750 BC according to the Middle chronology. Law[edit] Ex.

Hammurabi Map showing the Babylonian territory upon Hammurabi's ascension in c. 1792 BC and upon his death in c. 1750 BC Hammurabi (Akkadian from Amorite ʻAmmurāpi, "the kinsman is a healer", from ʻAmmu, "paternal kinsman", and Rāpi, "healer"; died c. 1750 BC) was the sixth king of Babylon (that is, of the First Babylonian Dynasty) from 1792 BC to 1750 BC middle chronology (1728 BC – 1686 BC short chronology[2]). He became the first king of the Babylonian Empire following the abdication of his father, Sin-Muballit, extending Babylon's control over Mesopotamia by winning a series of wars against neighboring kingdoms.[3] Although his empire controlled all of Mesopotamia at the time of his death, his successors were unable to maintain his empire. Hammurabi is known for the set of laws called Hammurabi's Code, one of the first written codes of law in recorded history. Reign and conquests This bust, known as the "Head of Hammurabi", is now thought to predate Hammurabi by a few hundred years[6] (Louvre)

Enuma Elish--The Babylonian Creation Story The Babylonian Creation Story (Enuma elish) (LINKS) Like the Greek Theogony, the creation of the world in the Enuma elish begins with the universe in a formless state, from which emerge two primary gods, male and female: Apsu, the male "begetter," is the sweet waters, while Tiamat, the female "maker," is the bitter, salt waters. Sweet and salt water mingle together at the mouths of the Tigris and Euphrates rivers, site of the origins of Mesopotamian civilization. Some translators see the word "maker" in line 4 not as an adjective describing Tiamat but as another god, named Mummu, who emerges at the same time. After the waters of Apsu and Tiamat mix, the gods Lahmu and Lahamu ("slime, mud") emerge. The young Ea was stronger than his father, and like any youngster he was fond of running around, playing with some other new gods (his brothers). Like a captive slave, Mummu is led by a nose-rope. The poem certainly celebrates a god who is new to us, Marduk. Babylonian Creation Questions 1. 2.

Psalm 104 and The Hymn To Aten In each of the three divisions of the Egyptian empire Egypt, Kush, and Syria, he built a temple consecrated to Aten. He took up residence in a city he had built called Akhetaten, known today as the Tell el-Armarna in the southeastern part of Egypt. Aten represented a universal power that paralleled the Pharaoh's growing power over the known world. During Akenaten's reign, Egypt's power significantly declined. Another possibility stems from the evidence of Persian names in residence at Amarna. [Here is expressed the polytheistic point of view] Thou art the lord of heaven, Thou art the lord of the earth; Thou art the creator of those who dwell in the heights, and Those who dwell in the depths. [monotheism was beginning throughout the world with the idea of the "God of Gods", and is consistent with the concept of G-d in the Pentateuch] Thou didst create the earth, Thou dist fashion the man, Thou didst make the watery abyss of the sky... [2. * The Sun as what it is... just the sun.