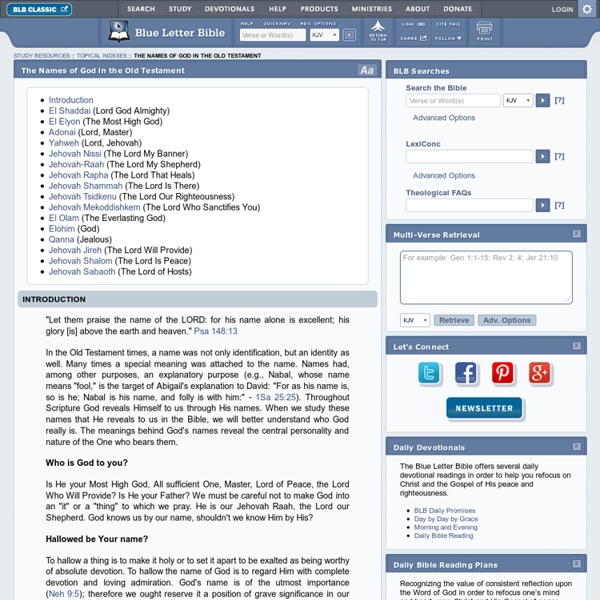 "Let them praise the name of the LORD: for his name alone is excellent; his glory [is] above the earth and heaven." Psa 148:13 In the Old Testament times, a name was not only identification, but an identity as well. Many times a special meaning was attached to the name. Names had, among other purposes, an explanatory purpose (e.g., Nabal, whose name means "fool," is the target of Abigail's explanation to David: "For as his name is, so is he; Nabal is his name, and folly is with him:" - 1Sa 25:25). Throughout Scripture God reveals Himself to us through His names. Who is God to you? Is He your Most High God, All sufficient One, Master, Lord of Peace, the Lord Who Will Provide? Hallowed be Your name? To hallow a thing is to make it holy or to set it apart to be exalted as being worthy of absolute devotion. (el shad-di') All-Sufficient One, Lord God Almighty Use in the Bible: In the Old Testament El Shaddai occurs 7 times. Variant spellings: None TWOT Reference: 2333 Strong's Reference: H7706

The Names of God - Jehovah-M'Kaddesh Leviticus 20:1-8 The Names of God - Jehovah-M'Kaddesh Leviticus 20:1-8 Over the past several weeks we have been looking at the various ways that God has revealed Himself to us in Scripture indicated by His names. Each name that God uses for Himself reveals to us an aspect of His character that helps us to know Him better. Elohim = God -- Creator, Preserver, Keeper of His Covenant Jehovah = LORD -- holiness (Truth revealer), righteousness, redemption El-Shaddai = Almighty God -- Our all-sufficient supply, Bestower of power, gifts, blessings, and the one who makes us fruitful Adonai = Lord - Our Sovereign God, Owner of all. Tonight we will look at another of His names. Leviticus is the book of life, a book explaining the walk and worship of a people already redeemed. I. A. 1. 2. 3. B. 1. (Genesis 2:3) And God blessed the seventh day, and sanctified it: because that in it he had rested from all his work which God created and made. 2. 3. 4. II. A. B. C. III. A. 1. 2. 3. B. a. b. c. 2. a. b. 3. a. b. c. d.

Hebrew for Christians - Learn Hebrew for FREE! Blue Letter Bible Greek New Testament - Parallel Greek New Testament by John Hurt 4witness.org - For Witness to Jehovahs Witnesses and Mormons Q: Which version of the Bible do you use/recommend? A: Frequently we are asked about Bible versions--which is best, which is most accurate, which do we recommend. Unfortunately, often those who ask have already made up their mind and use the Bible version issue as a kind of litmus test for doctrinal purity. That does not speak well for where this issue has taken the Church. The Bible version issue is far more complicated than most people understand. Some have read a booklet or pamphlet from a Bible teacher who has condemned all versions except his favorite. Sometimes the logic of these booklets is faulty. Take this little quiz. Contrary to what I have read in some booklets, Bible translators for some of the versions were not homosexuals who wanted to remove the blood from the Bible. While the original writings of Paul, Moses, Peter, etc. do not exist today (they are called the "autographs" of Scripture), there are plenty of copies of these autographs and copies of copies. Which Bible version does Back to the Bible use? But as Dr.