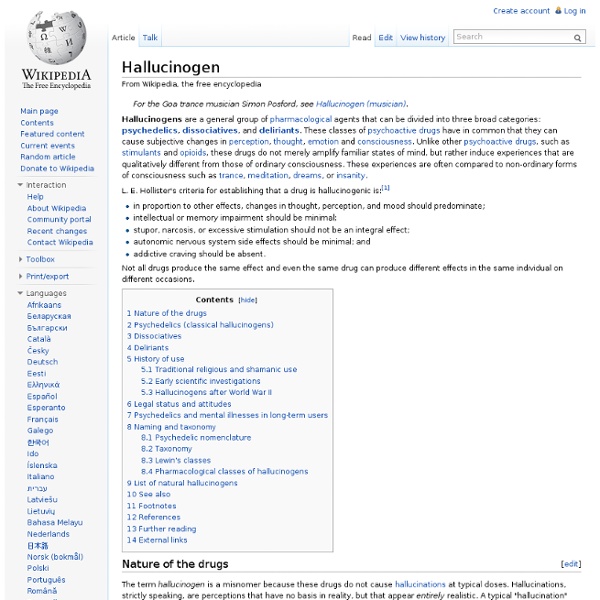 Entheogen A group of peyotes, in cultivation. Peyote has been used in ritual contexts for thousands of years.[1][2][3] With the advent of organic chemistry, there now exist many synthetic drugs with similar psychoactive properties, many derived from these plants. Etymology[edit] The neologism entheogen was coined in 1979 by a group of ethnobotanists and scholars of mythology (Carl A. Entheogen was coined as a replacement for the terms hallucinogen and psychedelic. Ruck et al. argued that the term hallucinogen was inappropriate owing to its etymological relationship to words relating to delirium and insanity. In a strict sense, only those vision-producing drugs that can be shown to have figured in shamanic or religious rites would be designated entheogens, but in a looser sense, the term could also be applied to other drugs, both natural and artificial, that induce alterations of consciousness similar to those documented for ritual ingestion of traditional entheogens. Entheogens[edit] Species[edit]

Psychedelic drug LSD is widely known as a psychedelic drug and often features psychedelic artwork on its blotters A psychedelic substance is a psychoactive drug whose primary action is to alter cognition and perception. Psychedelics are part of a wider class of psychoactive drugs known as hallucinogens, a class that also includes structurally unrelated substances such as dissociatives and deliriants. Unlike other drugs such as stimulants and opioids which induce familiar states of consciousness, psychedelics tend to affect and explore the mind in ways that result in the experience being qualitatively different from those of ordinary consciousness. The psychedelic experience is often compared to non-ordinary forms of consciousness such as trance, meditation, yoga, religious ecstasy, dreaming and even near-death experiences. Many psychedelic drugs worldwide are illegal unless used in a medical context, such as psychedelic therapy Despite these regulations, recreational use of psychedelics is common.

Michael Persinger Michael A. Persinger (born June 26, 1945) is a cognitive neuroscience researcher and university professor with over 200 peer-reviewed publications. He has worked at Laurentian University, located in Sudbury, Ontario, since 1971. Early life[edit] Research and academic work[edit] Much of his work focuses on the commonalities that exist between the sciences, and aims to integrate fundamental concepts of various branches of science.[8] He organized the Behavioral Neuroscience Program at Laurentian University in Sudbury, Ontario, integrating chemistry, biology and psychology. Research in parapsychology[edit] Research in neurotheology[edit] During the 1980s he stimulated people's temporal lobes artificially with a weak magnetic field to see if he could induce a religious state (see God helmet). The only published attempt to replicate these effects failed to do so and concluded that subjects' reports correlated with their personality characteristics and suggestibility. Tectonic Strain Theory[edit]

Kathleen Harrison Vault Kathleen Harrison is an ethnobotanist, artist, and photographer who researches the relationship between plants and people, with a particular focus on art, myth, ritual, and spirituality. Harrison teaches in Hawaii, California, and the Peruvian Amazon. She has done fieldwork in Latin America for 30 years, and is the President and Projects Director of Botanical Dimensions, a non-profit foundation devoted to preserving medicinal and shamanic plant knowledge from the Amazonian rainforest and tropics around the world. Harrison is a popular lecturer at conferences, seminars, and workshops; she continues to document the many faces of ethnobotany with photographs, which she combines with stories in her slide presentations. Deliriant Deliriants are a class of hallucinogen. The term was introduced by David F. Duncan and Robert S. Gold to distinguish these drugs from psychedelics and dissociatives, such as LSD and ketamine respectively, due to their primary effect of causing delirium, as opposed to the more lucid states produced by other hallucinogens (psychedelics and dissociatives).[1] The term is generally used to refer to anticholinergic drugs. Effects[edit] The effects have been linked to sleepwalking, a fugue state or a psychotic episode (particularly in that the subject has minimal control over their actions and little to no recall of the experience). Naturally occurring deliriants are found in plant species such as Atropa belladonna (deadly nightshade), various Brugmansia species (Angel's Trumpets), Datura stramonium (Jimson weed), Hyoscyamus niger (henbane), and Mandragora officinarum (mandrake) in the form of tropane alkaloids (notably atropine, scopolamine, and hyoscyamine). Recreational use[edit]

Kathleen Harrison Vault : Kat Harrison, Botanical Dimensions, and the Shamanic Plant Mind Since the introduction of shamanic plants and medicines to Western science, many anthropologists and laboratory wizards have struggled to divine their cultural significance and figure out how they work their peculiar magic. Yet, in spite of all the work done in university laboratories, sterile hospitals, and million-dollar pharmaceutical research wings, conventional science has done little to unravel the ancient mysteries of shamanic healing power. Divorced from traditional contexts, shamanic folk medicines and visionary practices have remained a mystery. It is only recently, through the work of researchers in the "softer" sciences of ethno- and entheobotany, that the true role of these plants could be understood in terms the Western mind could appreciate. Despite the ancient wisdom and power offered by these plant spirits, shamanic plants and practices are now threatened by the encroachment of industrialized forces into rainforest societies.

Aldous Huxley Aldous Leonard Huxley /ˈhʌksli/ (26 July 1894 – 22 November 1963) was an English writer, philosopher and a prominent member of the Huxley family. He was best known for his novels including Brave New World, set in a dystopian London, and for non-fiction books, such as The Doors of Perception, which recalls experiences when taking a psychedelic drug, and a wide-ranging output of essays. Early in his career Huxley edited the magazine Oxford Poetry, and published short stories and poetry. Mid career and later, he published travel writing, film stories and scripts. He spent the later part of his life in the US, living in Los Angeles from 1937 until his death. In 1962, a year before his death, he was elected Companion of Literature by the Royal Society of Literature.[1] Huxley was a humanist, pacifist, and satirist. Early life[edit] Huxley began his learning in his father's well-equipped botanical laboratory, then went to Hillside School, Malvern. Career[edit] Bloomsbury Set[edit] Eyesight[edit]

Psilocybin Psilocybin[nb 1] (/ˌsɪləˈsaɪbɪn/ SIL-ə-SY-bin) is a naturally occurring psychedelic compound produced by more than 200 species of mushrooms, collectively known as psilocybin mushrooms. The most potent are members of the genus Psilocybe, such as P. azurescens, P. semilanceata, and P. cyanescens, but psilocybin has also been isolated from about a dozen other genera. As a prodrug, psilocybin is quickly converted by the body to psilocin, which has mind-altering effects similar (in some aspects) to those of LSD, mescaline, and DMT. In general, the effects include euphoria, visual and mental hallucinations, changes in perception, a distorted sense of time, and spiritual experiences, and can include possible adverse reactions such as nausea and panic attacks. History[edit] Early[edit] Modern[edit] Albert Hofmann (shown here in 1993) purified psilocybin and psilocin from Psilocybe mexicana in the late 1950s. Occurrence[edit]

Jeremy Narby Jeremy Narby (born 1959) is an anthropologist and writer. Narby grew up in Canada and Switzerland, studied history at the University of Canterbury, and received a doctorate in anthropology from Stanford University. Narby spent several years living with the Ashaninca in the Peruvian Amazon cataloging indigenous uses of rainforest resources to help combat ecological destruction. Narby has written three books, as well as sponsored an expedition to the rainforest for biologists and other scientists to examine indigenous knowledge systems and the utility of Ayahuasca in gaining knowledge. Since 1989, Narby has been working as the Amazonian projects director for the Swiss NGO, Nouvelle Planète. Books[edit] External links[edit] "The Cosmic Serpent" an interview in ascent magazine.

Dr Andrija Puharich, Official website Phenethylamine Occurrence[edit] Phenethylamine is widely distributed throughout the plant kingdom.[5] Chemistry[edit] Synthesis[edit] One method for preparing β-phenethylamine, set forth in J. C. A much more convenient method for the synthesis of β-phenethylamine is the reduction of ω-nitrostyrene by lithium aluminum hydride in ether, whose successful execution was first reported by R. Pharmacology[edit] Phenethylamine, similar to amphetamine in its action, releases norepinephrine and dopamine.[9][10][11] When taken orally, though, it is rapidly metabolized.[12] Abnormally low concentrations of endogenous phenethylamine are found in those suffering from attention-deficit hyperactivity disorder (ADHD),[13] whereas abnormally high concentrations have been discovered to have a strong, positive correlation with the incidence of schizophrenia.[14] Phenethylamine and amphetamine pharmacodynamics in a TAAR1–dopamine neuron Pharmacokinetics[edit] Toxicity[edit] See also[edit] References[edit]