Va. girl's murder highlights dangers of teens' unmonitored social activity. VIRGINIA -- A bail hearing will be held on Thursday for one of the two Virginia Tech students charged in the stabbing death of 13-year-old Nicole Lovell. 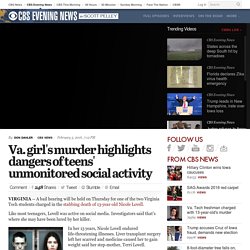 Like most teenagers, Lovell was active on social media. Investigators said that's where she may have been lured by her killer. In her 13 years, Nicole Lovell endured life-threatening illnesses. CONSTELAÇÃO FAMILIAR – As cobranças e acusações aos nossos pais. Fisher-Price's Cute New Toy Aims to Teach Preschoolers the Basics of Computer Programming. 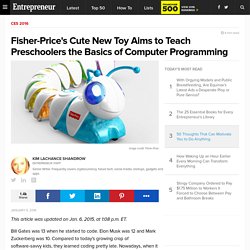 ET. Bill Gates was 13 when he started to code. Elon Musk was 12 and Mark Zuckerberg was 10. Compared to today’s growing crop of software-savvy kids, they learned coding pretty late. How to pick which board game to play, in one handy flowchart. The science of spanking: What happens to spanked kids when they grow up? Three Steps Family First Mishpacha. Emotional Invalidation: The First Deadly Sin -

Clutter and Depression. Dishes in the sink, toys throughout the house, stuff covering every flat surface; this clutter not only makes our homes look bad, it makes us feel bad, too. 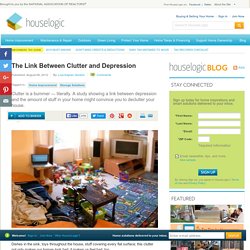 At least that’s what researchers at UCLA’s Center on Everyday Lives and Families (CELF) discovered when they explored in real time the relationship between 32 California families and the thousands of objects in their homes. The resulting book, Life at Home in The Twenty-First Century, is a rare look at how middle-class Americans use the space in their homes and interact with the things they accumulate over a lifetime. Our over-worked closets are overflowing with things we rarely touch. Related: Your Home’s Unsung Hero — The Closet It turns out that clutter has a profound affect on our mood and self-esteem.

We’re destroying our kids — for nothing: Too much homework, too many tests, too much needless pressure. My own awakening to the toxicity of the achievement race came the way it does to many parents: via years of trying to keep up with it. 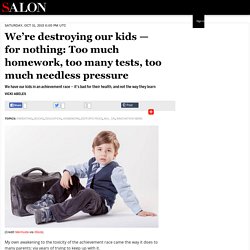 I sensed the problem in my home before I could name it. My daughters, Shelby and Jamey, were in middle school, and Zakary was in third grade. They were still children, in the essential sense of the word. Gov't approves law cancelling parents' rights - Inside Israel. The Ministerial Committee for Legislation approved Sunday for legislation a bill submitted by MK Yoav Kisch (Likud) called "Parents and their Children. 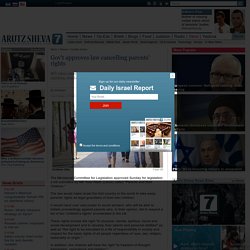 " The law would make Israel the first country in the world to take away parents' rights as legal guardians of their own children. It would hand over vast power to social workers, who will be able to initiate proceedings against parents who, in their opinion, fail to respect a list of ten "children's rights" enumerated in the bill. These rights include the right "to physical, mental, spiritual, moral and social development and to develop their talents and personal abilities" as well as "the right to be educated to a life of responsibility in society and respect for the basic rights of all people regardless of race, sex, religion, nationality or origin.

" In addition, the children will have the right "to freedom of thought, expression, conscience and religion. " Start Empathy. Temos que falar sobre isso. Being broke right now is actually a good thing for my family. There are two ways to handle being broke when you have kids: Get The Times of Israel's Daily Edition by email and never miss our top stories Free Sign up! 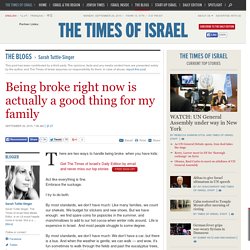 Act like everything is fine. Escolas Transformadoras. Nutrition Education, Free - Fun Healthy Kids' Games, Healthy Family Living Website, My Plate Education, Healthy Eating Wellness Tools, Children's Nutrition Information, Free Kids' Games. How & Why We Became a Codependent. We Develop Codependency in Our Childhood. Origins. Explanation. These Posters Will Show You How Famous Start-Ups Were Conceived. Every great idea comes from a dream and a ll our dreams can come true, only if we have the courage to pursue them. 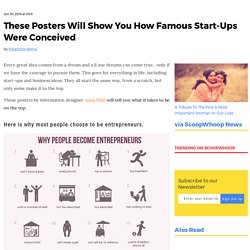 The 3 Types of People Who May Want To Consider Skipping College. According to College Board the average cost of attending a four-year college course in the U.S. has risen an astounding 41% in the last decade. 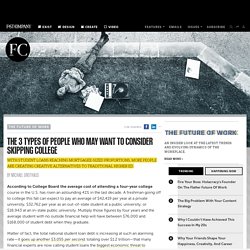 A freshman going off to college this fall can expect to pay an average of $42,419 per year at a private university, $32,762 per year as an out-of-state student at a public university, or $18,943 at an in-state public university. Multiply those figures by four years and the average student with no outside financial help will have between $76,000 and $168,000 of student debt when they graduate. Matter of fact, the total national student loan debt is increasing at such an alarming rate—it goes up another $3,055 per second, totaling over $1.2 trillion—that many financial experts are now calling student loans the biggest economic threat to America. Natalie Portman Harvard Commencement Speech. TEDxCampos - Biel Baum - Ensinando crianças a comerem melhor. Somos iguais. Fazemos tudo diferente. Conheça Davi Braga, o garoto de 13 anos que criou uma startup de venda de material escolar - Start. Notonappstore.tumblr.com. America's young workers: Destined for failure? 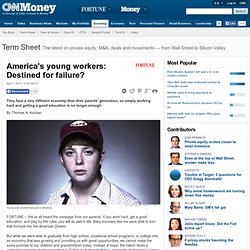 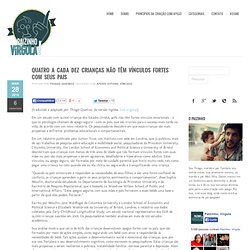 What a bunch of BS. “Follow Your Passion” is easily the worst advice you could ever give or get. Jovens dos EUA deixam estudos para criar apps - 18/03/2014 - Tec. Hearts and Beats.