JK Rowling's life advice: ten quotes on the lessons of failure. Could You Go 40 Days Without Being Mean? I’m not saying I’m a terrible person. 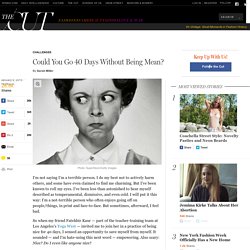 I do my best not to actively harm others, and some have even claimed to find me charming. But I’ve been known to roll my eyes. I’ve been less than astonished to hear myself described as temperamental, dismissive, and even cold. I will put it this way: I’m a not-terrible person who often enjoys going off on people/things, in print and face-to-face. But sometimes, afterward, I feel bad. So when my friend Fatehbir Kaur — part of the teacher-training team at Los Angeles’s Yoga West — invited me to join her in a practice of being nice for 40 days, I sensed an opportunity to save myself from myself. Sanidad: Crónica de una muerte corriente. Francisca Bonilla, Paquita para los suyos, está agonizando. 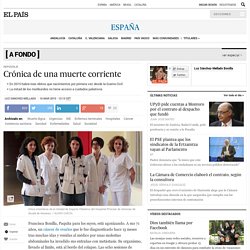 A sus 71 años, un cáncer de ovarios que le fue diagnosticado hace 15 meses tras muchas idas y venidas al médico por unas molestias abdominales ha invadido sus entrañas con metástasis. Su organismo, llevado al límite, está al borde del colapso. Oliver Sacks on Learning He Has Terminal Cancer. Over the last few days, I have been able to see my life as from a great altitude, as a sort of landscape, and with a deepening sense of the connection of all its parts. 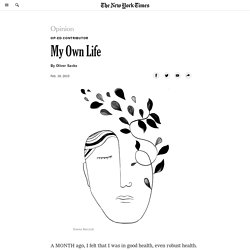 This does not mean I am finished with life. On the contrary, I feel intensely alive, and I want and hope in the time that remains to deepen my friendships, to say farewell to those I love, to write more, to travel if I have the strength, to achieve new levels of understanding and insight. This will involve audacity, clarity and plain speaking; trying to straighten my accounts with the world. But there will be time, too, for some fun (and even some silliness, as well). I feel a sudden clear focus and perspective.

When a name is all that's left: Why I changed my name after 8 years of marriage. Relationships Linda Annette Dahlstrom Anderson TODAY contributor Oct. 22, 2014 at 9:32 AM ET. 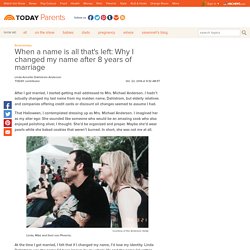 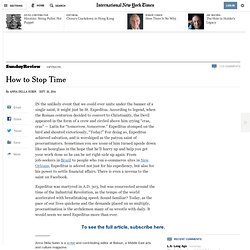 For Arianna Huffington and Kobe Bryant: First, Success. Then Sleep. Photo They may have seemed an unlikely pair, but it didn’t take long for , the Los Angeles Lakers star, and Arianna Huffington, co-founder and editor in chief of the Media Group, to develop the easy familiarity of old pals. 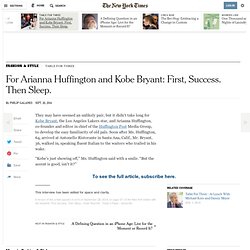 Soon after Ms. When Philosophy Becomes Therapy. Alain de Botton's self-help books for those who style themselves as intellectuals are making their way to the United States. 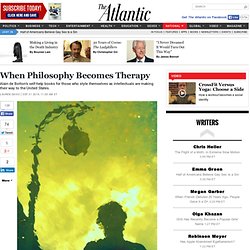 Philosophy has earned a reputation as a complicated, inaccessible, and irrelevant pursuit, consigned mostly to old white men in wood-paneled offices. It’s vaguely associated with asking the kinds of big questions—Do we exist? ‘I Forgot to Remember’ Author Su Meck on Life After Losing 22 Years of Memories. Four years ago, inside a classroom at Montgomery community college outside Washington, D.C., Susan Meck—who goes by Su and who was then, technically, legally, 44—quietly removed Dr. 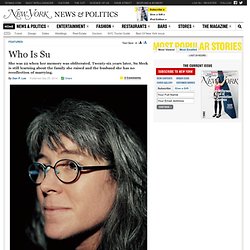 Seuss’s Hop on Pop from her bag. She was extremely nervous. Powerful photos of people shortly before and directly after their death. Photographer Walter Schels was terrified of death, so much so he refused to see his mother after she passed away. 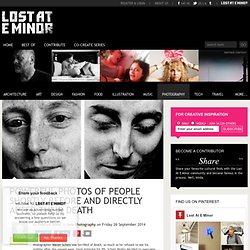 Upon entering his 70s, Schels finally decided to overcome his fear through a bold, bizarre project – photographing individuals before and directly after their death. [This post originally ran on Feature Shoot] The black and white portraits are a clinical confrontation with the the unknown, the proximity of the lens to subject unflinching and slightly macabre. Watch the emotional moment an Alzheimer's patient remembers their daughter - Americas. Kelly Gunderson is just one of many who has to cope with the pain of seeing a family member suffer from dementia. 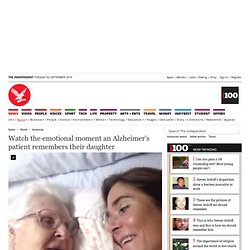 Yet she filmed the amazing moment her 87-year-old mother with Alzheimer's briefly recognised her daughter. Gunderson captured a conversation with her mother in a hospital bed. Letterman - 9/11 Monologue. Here’s the damning letter Robin Williams wrote to his Mrs Doubtfire co-star's principal after they expelled her - News - People. Putting in calls to the Schindler's List cast and crew in character as the Genie from Aladdin and visiting sex shops dressed as Mrs Doubtfire, Williams was always trying to make people's day and cheer them up with his unique brand of humour.

Following his death, co-star Lisa Jakub (Lydia Hillard) has opened up about the time he was able to help her out, explaining in a blog post how Williams wrote to her principal after her school kicked her out just for taking a few months off to film Mrs Doubtfire and refused to have her back. In the letter Lisa passed on to The Independent below, Williams scolds the school for its stance on the matter, evoking the world view of his character Sean in Good Will Hunting as he insists that "a student of her calibre and talent should be encouraged to go out in the world and learn through her work.

" (Picture: Supplied/Lisa Jakub) (Enlarged version of image here) Video: The death of Robin Williams Loading gallery Robin Williams: A career in pictures 1 of 30. Farewell to Robin Williams: a thank you note. Robin Williams died today. It seems surreal to write that. But since writing is the way I process the incomprehensible — I find myself writing. Everyone is tweeting and facebooking and calling into radio shows about what a great talent Robin was. Remembering Robin : Mara Wilson Writes Stuff.

He always reminded me a little of my father. Robin Williams, as I knew him, was warm, gentle, expressive, nurturing, and brilliant. While it can be hard for me to remember filming Doubtfire, I’ve been flooded with memories in the past few days. Growing Up With a Depressed Parent. When your mom or dad is depressed, you have no choice but to grow up fast. Research has shown that kids with a parent suffering from depression usually end up assuming the role of caretaker, sometimes at a very young age. Now, a new qualitative study led by Hanna Van Parys of Ghent University in Belgium takes a deeper look at the experiences of these children, by interviewing 21 young adults who grew up with a depressed mom or dad.

Here are some excerpts from their stories, which were published online last week in the Journal of Marital and Family Therapy: BeckieO Hair Pulling Selfie Video - Trichotillomania. An Indulgent Life Isn’t Necessarily a Happy Life. Rencontre avec Kilian Jornet du 3 juin 2013, Sports extrêmes : RTBF Vidéo. How to Trick Yourself Into Eating Healthier. Els fills de Tito recorden el seu pare. "Aquest és l'últim article que escric perquè em moro": el comiat d'un cronista de Girona. Cancer Doctor Peter Bach on Losing His Wife to Cancer - The streetlights in Buenos Aires are considerably dimmer than they are in New York, one of the many things I learned during my family’s six-month stay in Argentina. The front windshield of the rental car, aged and covered in the city’s grime, further obscured what little light came through.

When we stopped at the first red light after leaving the hospital, I broke two of my most important marital promises. Please, Mother, Enough. Photo. Her Baby Died During Birth, But She Asked To Hold Him. Two Hours Later, She Heard A Gasp… Why Monica Lewinsky Still Matters - Page 2 of 2. Monica Lewinsky and Bill Clinton were both mired in the same scandal, and even though they were adults and the relationship was consensual, he not only had an extramarital affair but he held the highest position in the land and he abused his power in the most shameful of ways.