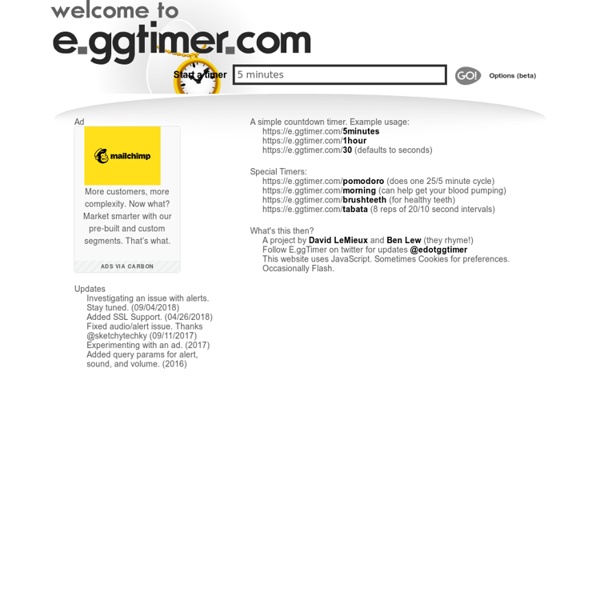 The 101 Most Useful Websites on the Internet Here are the most useful websites on the Internet that will make you smarter, increase productivity and help you learn new skills. These incredibly useful websites solve at least one problem really well. And they all have cool URLs that are easy to memorize thus saving you a trip to Google. Two Browser-based Noise Meters That Show Students How Loudly They Speak Earlier this week on iPadApps4School.com I featured an app called Too Noisy that shows students how loudly they are speaking. The app measures the volume of the noise in a room and displays a meter indicating whether or not the the room is too noisy. If you don't have an iPad, you can find the same basic features in the following browser-based tools. Bouncy Balls shows students the volume of the noise in your classroom by displaying a set of colorful bouncing balls.

The 50 most important English proverbs The 50 most important English proverbs What are proverbs? Every culture has a collection of wise sayings that offer advice about how to live your life. These sayings are called "proverbs". How can you use proverbs to learn English? It's good to know the really common English proverbs because you hear them come up in conversation all the time. With the latest WikiLeaks revelations about the CIA – is privacy really dead? In the week that WikiLeaks revealed the CIA and MI5 have an armoury of surveillance tools that can spy on people through their smart TVs, cars and cellphones, the FBI director, James Comey, has said that Americans should not have expectations of “absolute privacy”. “There is no such thing as absolute privacy in America: there is no place outside of judicial reach,” Comey said at a Boston College conference on cybersecurity. The remark came as he was discussing the rise of encryption since Edward Snowden’s 2013 revelations of the NSA’s mass surveillance tools, used on citizens around the world. Both the Snowden revelations and the CIA leak highlight the variety of creative techniques intelligence agencies can use to spy on individuals, at a time when many of us are voluntarily giving up our personal data to private companies and installing so-called “smart” devices with microphones (smart TVs, Amazon Echo) in our homes. So, where does this leave us? Gidari isn’t that surprised.

Topsy - Real-time search for the social web With iOS 9, Search lets you look for content from the web, your contacts, apps, nearby places, and more. Powered by Siri, Search offers suggestions and updates results as you type. There are two ways to use Search on your iOS device. Quick Search 100+ Ways to Learn Anything on the Internet Learn Anything... Thanks to this amazing collection of educational websites you can become a master in anything from home renovations to rocket science, maths to photography, art to computer programming. What are you going to master today?

The Hat - Random Name Generator Current version: 3.0.9.0License: Freeware "I'm first!" "No I'm first!""No, I called it!" "Well I'm second!"" Serial Taxi This EFL lesson plan is designed around Serial Taxi a short animation by Paolo Cogliati and the theme of murder mysteries. Students predict what is going to happen in a film, watch a short film and write a murder mystery. Language level: Intermediate (B1) – Upper Intermediate (B2) Learner type: Teens and adults Time: 60 minutes