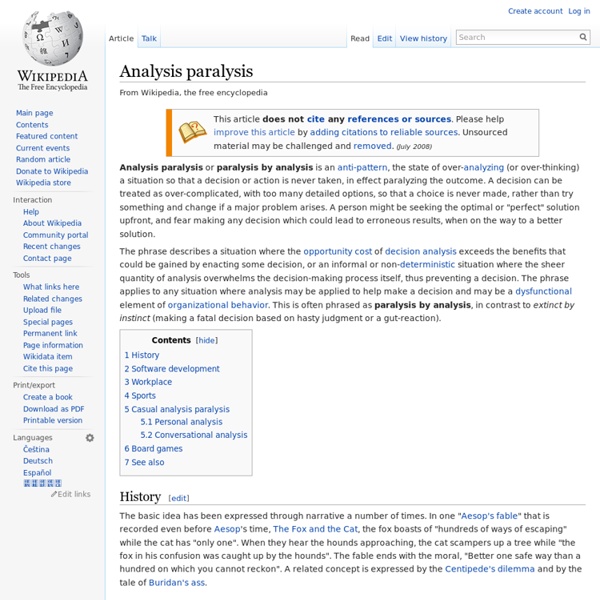 Analysis paralysis or paralysis by analysis is an anti-pattern, the state of over-analyzing (or over-thinking) a situation so that a decision or action is never taken, in effect paralyzing the outcome. A decision can be treated as over-complicated, with too many detailed options, so that a choice is never made, rather than try something and change if a major problem arises. A person might be seeking the optimal or "perfect" solution upfront, and fear making any decision which could lead to erroneous results, when on the way to a better solution. The phrase describes a situation where the opportunity cost of decision analysis exceeds the benefits that could be gained by enacting some decision, or an informal or non-deterministic situation where the sheer quantity of analysis overwhelms the decision-making process itself, thus preventing a decision. History[edit] Software development[edit] Analysis paralysis is an example of an anti-pattern. Workplace[edit] Sports[edit] Board games[edit]

Critical thinking Critical thinking is a type of clear, reasoned thinking. According to Beyer (1995) Critical thinking means making clear, reasoned judgements. While in the process of critical thinking, ideas should be reasoned and well thought out/judged.[1] The National Council for Excellence in Critical Thinking defines critical thinking as the intellectually disciplined process of actively and skillfully conceptualizing, applying, analyzing, synthesizing, and/or evaluating information gathered from, or generated by, observation, experience, reflection, reasoning, or communication, as a guide to belief and action. Bounded rationality Bounded rationality is the idea that in decision-making, rationality of individuals is limited by the information they have, the cognitive limitations of their minds, and the finite amount of time they have to make a decision. It was proposed by Herbert A. Simon as an alternative basis for the mathematical modeling of decision making, as used in economics, political science and related disciplines; it complements rationality as optimization, which views decision-making as a fully rational process of finding an optimal choice given the information available.[1] Another way to look at bounded rationality is that, because decision-makers lack the ability and resources to arrive at the optimal solution, they instead apply their rationality only after having greatly simplified the choices available. Some models of human behavior in the social sciences assume that humans can be reasonably approximated or described as "rational" entities (see for example rational choice theory). Origins[edit]

Existential crisis An existential crisis is a moment at which an individual questions the very foundations of their life: whether their life has any meaning, purpose or value.[1] This issue of the meaning and purpose of existence is the topic of the philosophical school of existentialism. Description[edit] An existential crisis may result from: The sense of being alone and isolated in the world;A new-found grasp or appreciation of one's mortality;Believing that one's life has no purpose or external meaning;Searching for the meaning of life;Shattering of one's sense of reality, or how the world is;Awareness of one's freedom and the consequences of accepting or rejecting that freedom;An extremely pleasurable or hurtful experience that leaves one seeking meaning; In existentialist philosophy, the term 'existential crisis' specifically relates to the crisis of the individual when they realize that they must always define their own lives through the choices they make.

Predictably Irrational Predictably Irrational: The Hidden Forces That Shape Our Decisions is a 2008 book by Dan Ariely, in which he challenges readers' assumptions about making decisions based on rational thought. Ariely explains, "My goal, by the end of this book, is to help you fundamentally rethink what makes you and the people around you tick. I hope to lead you there by presenting a wide range of scientific experiments, findings, and anecdotes that are in many cases quite amusing. The Last Messiah Den sidste Messias (English: The Last Messiah), published in 1933, is one of Peter Wessel Zapffe's most significant essays as well as concepts, which sums up his own thoughts from his book, On the Tragic, and, as a theory describes a reinterpretation of Friedrich Nietzsche's Übermensch. Zapffe believed that existential angst in humanity was the result of an overly evolved intellect, and that people overcome this by "artificially limiting the content of consciousness."[1]

A mechanism for social selection and successful altruism Within the framework of neo-Darwinism, with its focus on fitness, it has been hard to account for altruism behavior that reduces the fitness of the altruist but increases average fitness in society. Many population biologists argue that, except for altruism to close relatives, human behavior that appears to be altruistic amounts to reciprocal altruism, behavior undertaken with an expectation of reciprocation, hence incurring no net cost to fitness. Herein is proposed a simple and robust mechanism, based on human docility and bounded rationality that can account for the evolutionary success of genuinely altruistic behavior. Because docility-receptivity to social influence-contributes greatly to fitness in the human species, it will be positively selected.

Obsessive–compulsive personality disorder This is a distinct disorder from obsessive-compulsive disorder (OCD), and the relation between the two is contentious. Both may share outside similarities — rigid and ritual-like behaviors, for example. Hoarding, orderliness, and a need for symmetry and organization are often seen in people with either disorder. But attitudes towards these behaviors by people afflicted with either of them differ: for people with OCD, for example, these behaviors are unwanted and seen as unhealthy, the product of anxiety-inducing and involuntary thoughts; for people with OCPD, on the other hand, they are experienced as rational and desirable, being the result of, for example, a strong adherence to routines, or a natural inclination towards cautiousness, or a desire to achieve perfection.

List of biases in judgment and decision making Cognitive biases are tendencies to think in certain ways that can lead to systematic deviations from a standard of rationality or good judgment, and are often studied in psychology and behavioral economics. There are also controversies over some of these biases as to whether they count as useless or irrational, or whether they result in useful attitudes or behavior. For example, when getting to know others, people tend to ask leading questions which seem biased towards confirming their assumptions about the person.

Positive Disintegration The Theory of Positive Disintegration (TPD) by Kazimierz Dąbrowski is a theory of personality development. Unlike mainstream psychology, Dąbrowski's theoretical framework views psychological tension and anxiety as necessary for growth. These "disintegrative" processes are therefore seen as "positive," whereas people who fail to go through positive disintegration may remain for their entire lives in a state of "primary integration." Advancing into disintegration and into the higher levels of development is predicated on having developmental potential, including overexcitabilities, above-average reactions to stimuli.

What We Don’t Know For the free market to work it is assumed that everyone knows everything, or at least everything they need to know. However the world is full of things we know nothing about. This is the problem of asymmetric information, where one person knows more than the other. This creates many problems which hamper the operation of the free market and prevent it from reaching the perfect equilibrium. There is one problem every consumer has before buying a product.

Erikson's stages of psychosocial development Erikson's stages of psychosocial development, as articulated by Erik Erikson, is a psychoanalytic theory which identifies eight stages through which a healthily developing human should pass from infancy to late adulthood. In each stage, the person confronts, and hopefully masters, new challenges. Each stage builds upon the successful completion of earlier stages. The challenges of stages not successfully completed may be expected to reappear as problems in the future. However, mastery of a stage is not required to advance to the next stage. Journal of Business Research - The impact of quality uncertainty without asymmetric information on market efficiency Volume 60, Issue 8, August 2007, Pages 858–867 Complexities in Markets Special Issue Edited By Nigel Gilbert

The Paradox of Choice Autonomy and Freedom of choice are critical to our well being, and choice is critical to freedom and autonomy. Nonetheless, though modern Americans have more choice than any group of people ever has before, and thus, presumably, more freedom and autonomy, we don't seem to be benefiting from it psychologically.—quoted from Ch.5, The Paradox of Choice, 2004 Schwartz's thesis[edit]