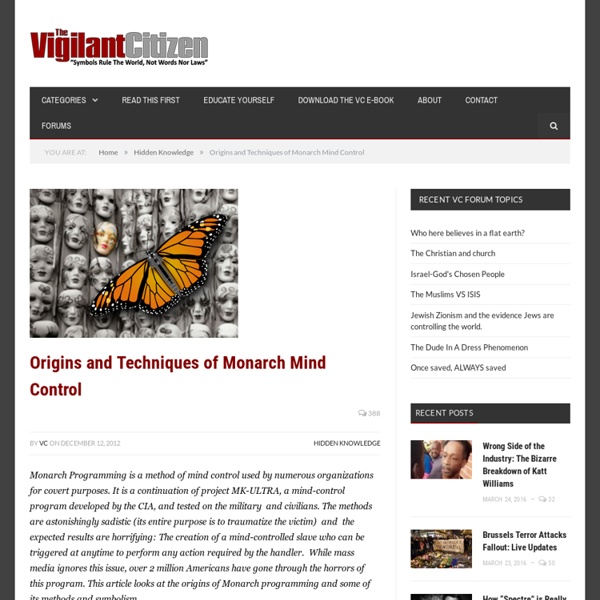 Monarch Programming is a method of mind control used by numerous organizations for covert purposes. It is a continuation of project MK-ULTRA, a mind-control program developed by the CIA, and tested on the military and civilians. The methods are astonishingly sadistic (its entire purpose is to traumatize the victim) and the expected results are horrifying: The creation of a mind-controlled slave who can be triggered at anytime to perform any action required by the handler. While mass media ignores this issue, over 2 million Americans have gone through the horrors of this program. This article looks at the origins of Monarch programming and some of its methods and symbolism. NOTE: This article contains disturbing elements and might trigger Monarch survivors. Monarch programming is a mind-control technique comprising elements of Satanic Ritual Abuse (SRA) and Multiple Personality Disorder (MPD). Origins Joseph Mengele, 1935 “DR. “Dr. Declassified MK-Ultra document Monarch Programming Method 1.

The Order of the Illuminati: Its Origins, Its Methods and Its Influence on the World Events The Order of the Illuminati is often at the center of debates about the impact of secret societies on human history. Is the Illuminati a myth or does it truly secretly rule the world? As the number of people asking that question has grown, facts about the Order have become diluted with misconceptions and disinformation, making objective research on the subject difficult. The world “Illuminati” is thrown around rather freely to describe the elite group that is secretly running the world. Considering that Secret Societies are supposed to be, by definition, secret, and that history is often rewritten by those in power, obtaining the unbiased truth about the Illuminati is a challenge. Types of Secret Societies Although several groups called themselves “Illuminati” in the past, the most influential and memorable of them was the Bavarian Illuminati. Secret Societies have existed throughout the course of history, each of them with different aims and with different roles in society. Manly P.

Roseanne Barr: "MK ULTRA Mind Control Rules in Hollywood" Roseanne Barr is an outspoken actress and comedienne who never shied away from tackling difficult and controversial issues, even if that meant being unpopular or being tagged as “crazy” by mass media. While I can’t say that I agree with all of her views, she remains one of the very few people in Hollywood who dare talking about its most damning issue: MK ULTRA. In a recent interview with RT, Roseanne talked about the dark side of the entertainment industry and directly mentioned MK ULTRA as being a major force in Hollywood. Roseanne basically says that Hollywood stars are terrified of using their status to speak out about important issues because there’s a “culture of fear” going on there, where “speaking out” almost automatically equals being shunned from the industry and having one’s career destroyed. More importantly she adds: “It’s also a big culture of Mind Control. This means that many stars do not speak out because they literally cannot do so.

"They Live", the Weird Movie With a Powerful Message ‘They Live’ is a science-fiction movie from the Eighties that features aliens, a WWF wrestler and a whole lot of sunglasses. What’s not to like? While, at first glance, the movie appears to be a bunch of nonsense, ‘They Live’ actually communicates a powerful message about the elite and its use of mass media to control the masses. Is the movie describing what we call the Illuminati? This article looks at the deeper meaning of John Carpenter’s strange but fascinating movie ‘They Live’. Warning: Major spoilers ahead (get over it, the movie is 24 years old). Watching They Live is a conflicting experience. The hero of the movie, played by WWF wrestler Rowdy Roddy Pipper, is a drifter that is apparently nameless. Are the aliens in the movie an imaginative way to portray the world’s elite, those who secretly run the world, those we call the Illuminati? The Premise “The venom of snakes is under their lips. Is the preacher’s description of the “masters” applicable to the Illuminati? In Conclusion

The World of Mind Control Through the Eyes of an Artist with 13 Alter Personas Kim Noble is a rare occurrence: a trauma-based mind control survivor with over 13 alter personas who don’t know each other but who all paint. She has suffered DID and MPD (dissociative identity disorder and multiple personality disorder) for most of her life, as a result of an extremely traumatic childhood. Each one of her alters paints with a personal and distinctive style but they all have one thing in common: they reveal the dark world of mind control programming, from its horrific techniques to its symbolism. We’ll look at the works of this unique artist who reveals a world that is totally hidden from the masses. Many articles on this site point out the presence of mind control symbolism in popular culture. Photo shoots, music videos and movies often glamorize and trivialize mind control and its symbolism by associating it with famous stars and trendy happenings. The works of Kim Noble vividly document the life of a mind control slave through the eyes of 13 alter personas. Bonny Key

Mind Control Theories and Techniques used by Mass Medias Mass media is the most powerful tool used by the ruling class to manipulate the masses. It shapes and molds opinions and attitudes and defines what is normal and acceptable. This article looks at the workings of mass media through the theories of its major thinkers, its power structure and the techniques it uses, in order to understand its true role in society. Most of the articles on this site discuss occult symbolism found in objects of popular culture. From these articles arise many legitimate questions relating to the purpose of those symbols and the motivations of those who place them there, but it is impossible for me to provide satisfactory answers to these questions without mentioning many other concepts and facts. I’ve therefore decided to write this article to supply the theoretical and methodological background of the analyzes presented on this site as well as introducing the main scholars of the field of mass communications. Elite Thinkers Walter Lippmann Carl Jung Viacom owns:

What is Dissociative Identity Disorder/DID (formerly Multiple Personality Disorder)? Many of the lenses I’ve created on Squidoo are about relatively unimportant topics such as Who Invented Chocolate?, The First Hot Air Ballooon or Santa’s Nice List. I don’t feel a need to explain why I wrote about those topics. Basically, they’re just fun. But I do think I should explain why I chose the topic of DID and what you should know about the information here. As the subtitle says, I’m not an expert on DID. If you’ve ever watched a movie or TV show about someone with DID, you might think alters jump in and out all day long and there’s a dramatic change when it happens. My friend with DID is one person most of the time. When I finally found out she had DID, however, it immediately rang true to me. My second bias is that I don’t think people with DID are “crazy.” So that’s my disclaimer – I’m no expert, I believe in DID, and I don’t think people who have it are crazy. Now that you’ve read the disclaimer, please feel free to continue on. (About the image shown above.

Talk Radio - Dr Colin Ross Interview: CIA Doctors and the Psychiatry Scam -- Science of the Spirit This week we were joined by Dr. Colin Ross, a psychiatrist who received his M.D. from the University of Alberta in 1981 and completed his specialty training in psychiatry at the University of Manitoba in 1985. He is the author of over 170 papers in professional journals, most of them dealing with dissociation, psychological trauma and multiple personality disorder. Dr. In his book, The C.I.A. In The Great Psychiatry Scam, Dr. Here's the transcript: Niall: Hello and welcome to SoTT Talk Radio. Joe: Hi there. Niall: We've also got Pierre Lescaudron. Pierre: Hi. Niall: And Jason Martin. Jason: Bonjour. Niall: Back by popular demand. Jason: Yeah. Niall: So this week we're going to be speaking with Dr. Dr. Niall: You're very welcome. Dr. Niall: Okay, well that's a key point right there. Dr. Pierre: Maybe you could explain the differences between schizophrenia and MPD because there seem to be some confusion between those conditions, some misdiagnosis. Dr. Niall: Go for it. Dr. Dr. Joe: Okay. Dr. Dr.