If you can believe it, we can laugh at it! 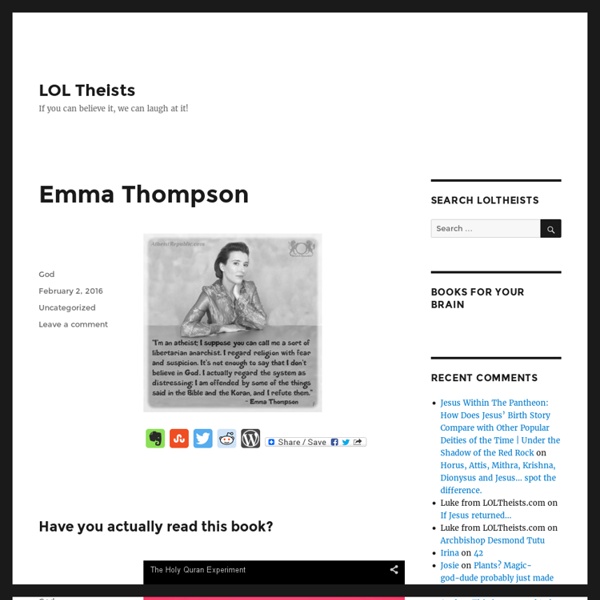 Related:  everything else • Infidelities: Collection No 4

The biggest Internet Database about Cost of Living, Housing Indicators and many other informations about cities and countries! Numbeo is the world’s largest database of user contributed data about cities and countries worldwide. Numbeo provides current and timely information on world living conditions including cost of living, housing indicators, health care, traffic, crime and pollution. Numbeo is a collection of Web pages containing numerical and other itemizable data about cities and countries, designed to enable anyone to contribute or modify content. Numbeo uses the wisdom of the crowd to obtain the most reliable information possible. Numbeo then provides you with a statistical analysis of the data collected. 4,066,631 prices in 6,991 cities entered by 447,697 contributors A few questions....

Atheists More Motivated by Compassion than the Faithful Atheists and agnostics are more driven by compassion to help others than are highly religious people, a new study finds. That doesn't mean highly religious people don't give, according to the research to be published in the July 2012 issue of the journal Social Psychological and Personality Science. But compassion seems to drive religious people's charitable feelings less than it other groups. "Overall, we find that for less religious people, the strength of their emotional connection to another person is critical to whether they will help that person or not," study co-author and University of California, Berkeley social psychologist Robb Willer said in a statement. "I was interested to find that this experience – an atheist being strongly influenced by his emotions to show generosity to strangers – was replicated in three large, systematic studies," Saslow said in a statement. "The compassion-inducing video had a big effect on their generosity," Willer said.

Stema Romaniei After the Fall: Bug Out Bag Essentials Checklist The Bug Out Bag (BOB), emergency preparedness kit, disaster kit, GOOD (Get Out Of Dodge) bag, grab bag, 72-Hour kit, INCH (I’m Never Coming Home) bag, or battle box. Whatever name you use, they all mean essentially the same thing: A kit that is ready to go when, as the doomsday preppers say, the Shit Hits The Fan (SHTF). It’s meant to be your one stop survival kit for emergency situations. Made specifically to be carried on your back and keep you alive for 72-hours or more. The whole purpose of the Bug Out Bag is staying alive, but in order to do that, it needs the essentials. Beginning with The Mighty Bag itself, we’ve run down the food, gear, equipment, and even the technology that you’re going to need during the critical juncture between hunky-dory civilization and Mad Max level anarchy. Getting to Know BOB There’s no single way to make a Bug Out Bag. Change Your Mind Buy The Best Expect Overlap Anywhere you can add an item that serves a couple of purposes, do so. How to Load The Gear Heat

'I'm spiritual but not religious' is a cop-out By Alan Miller, Special to CNN Editor’s note: Alan Miller is Director of The New York Salon and Co-Founder of London's Old Truman Brewery. He is speaking at The Battle of Ideas at London's Barbican in October. The increasingly common refrain that "I'm spiritual, but not religious," represents some of the most retrogressive aspects of contemporary society. Spiritual but not religious people are especially prevalent in the younger population in the United States, although a recent study has argued that it is not so much that people have stopped believing in God, but rather have drifted from formal institutions. It seems that just being a part of a religious institution is nowadays associated negatively, with everything from the Religious Right to child abuse, back to the Crusades and of course with terrorism today. Follow the CNN Belief Blog on Twitter What is it, this "spiritual" identity as such? CNN’s Belief Blog: The faith angles behind the biggest stories So what, one may ask?

Different Takes: Should we abandon idea of hell? Editor’s note: The new documentary "Hellbound?" explores Americans' ideas about hell. We asked two prominent Christians who featured in the film to give us their very different takes on hell. My Faith: The dangerous effects of believing in hell Editor’s note: Frank Schaeffer is a New York Times bestselling author. By Frank Schaeffer, Special to CNN Is it any coincidence that the latest war of religion that started on September 11, 2001, is being fought primarily between the United States and the Islamic world? And nowhere on earth have conservative Christians been closer to controlling foreign policy than here in the United States. What a pair George W. Follow the CNN Belief Blog on Twitter And so my view of "hell" encompasses two things: First, the theological question about whether a land of eternal suffering exists as God's "great plan" for most of humanity. CNN’s Belief Blog: The faith angles behind the biggest stories Since Christianity is my tradition, I can say more about it.

Don't Get Screwed Over

Related:
Related:  everything else   -  Infidelities: Collection No 4