The $1.3 Trillion Price Of Not Tweeting At Work 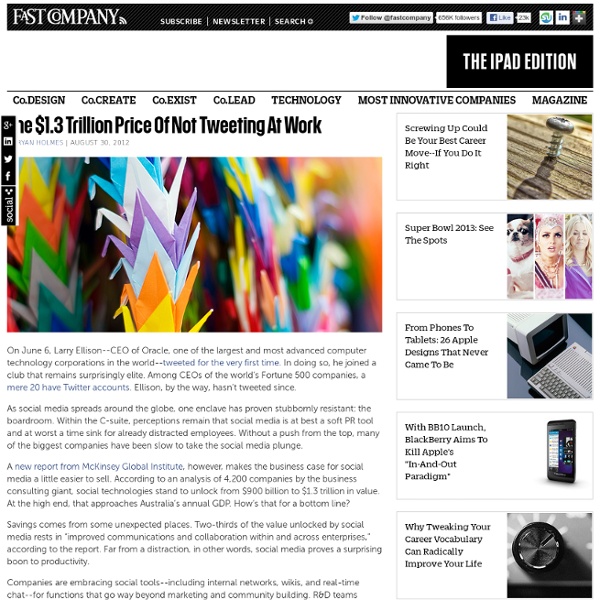 On June 6, Larry Ellison--CEO of Oracle, one of the largest and most advanced computer technology corporations in the world--tweeted for the very first time. In doing so, he joined a club that remains surprisingly elite. Among CEOs of the world’s Fortune 500 companies, a mere 20 have Twitter accounts. Ellison, by the way, hasn’t tweeted since. As social media spreads around the globe, one enclave has proven stubbornly resistant: the boardroom. Within the C-suite, perceptions remain that social media is at best a soft PR tool and at worst a time sink for already distracted employees. A new report from McKinsey Global Institute, however, makes the business case for social media a little easier to sell. Savings comes from some unexpected places. Companies are embracing social tools--including internal networks, wikis, and real-time chat--for functions that go way beyond marketing and community building. Behind this laundry list is a more hefty benefit.

GE Software: A Massive Startup In The Bay Area Posted by Tom Foremski - September 5, 2012 One of the largest startups in and around Silicon Valley is GE Global Software in San Ramon, California, a brand new division of giant General Electric, built from scratch into an organization of 400 engineers, growing to as many as 800 software engineers and researchers by year end. Betting big on software is a key business strategy for GE. The business group's annual revenues were more than $142 billion in 2012. Software is a far more scalable business than services, which are constrained by staff numbers. Its goal is to create a unique asset, a cutting edge software group capable of supporting the many varied business groups that make up GE's industrial conglomerate. It will require common software platforms that can integrate many different applications, plus development of cutting edge user interfaces, and the integration of hundreds of tools and third party technologies. Here are some notes from my meeting with Mr Ruh (photo top).

The Key To The Holiday Sales War? Winning The Social-Media Battle With the holidays quickly headed in our direction, virtually every marketer realizes that, now, more than ever, social media MUST be an integral part of any campaign. It’s no longer the trendy thing to do--it’s simply a necessary component of doing business. Consider the following 2011 statistics: * 66% of Black Friday purchases resulted from social media interactions When you combine those convincing numbers with the fact that 61% of holiday shoppers research their gift buying choices through social media, it creates a compelling picture that merchants ignore at their own peril: The holiday sales war can easily be won or lost on the social media battlefield. With every big company bombarding social media users with daily deals and requests to “like” and “follow” them, how do you make your holiday campaign stand out from the pack? #1: Ramp Up Your Responses Brands only respond to, on average, half of the posts on their social media pages. [Image: Flickr user Arti Sandhu]

The secrets behind social content: Social Media Week Special - Content Creation Collective (London, England September 26, 2012 · 6:15 PM Welcome to the The Content Creation Collective, a meetup for all creative types with a penchant for digital - writers, bloggers, editors, journalists, videographers, designers and producers - involved in the creation of content. This Social Media Week special will be taking place on the 26th September at 6:30pm aboard HMS President. We've got some great speakers for you who'll be revealing some of the industry's best kept secrets behind social content. Emma Gannon (@girllostincity) is a digital journalist and social media strategist living in London. Philip Calvert (@philipcalvert) is an award-winning social networking entrepreneur, social media speaker and author. We'll be holding this event on the HMS President, which is one of the permanently moored ships on Victoria Embankment, and an amazing venue for meetups as anyone who's attended our sister event OMN London will attest to. See you there, Natalie

(4) Social Media Marketing for the AEC Industry Google snaps up Waterloo startup BufferBox Parcel pickup kiosk operator BufferBox Inc. is moving on up to Google Inc., quite literally, after being acquired by the huge tech firm. That’s because home base for the team behind the Waterloo, Ont.-based startup is the VeloCity Garage inside the Communitech Hub startup incubator, located in the famed Lang Tannery building in the warehouse district — downstairs from Google’s regional office. We’re really excited to be able to build out that vision quite a bit quicker than we otherwise would have without them on side On Friday, Google announced it has acquired the not-quite-two-year-old startup for an undisclosed sum, which means the team at BufferBox will be moving their operations up a flight of stairs to join the Google team on the upper floor of the building. “Being a small company and a startup, there’s obviously a lot of challenges,” BufferBox chief executive Mr. We think there’s a real exciting space beyond this amazing start with boxes “We’re going to keep doing BufferBox,” Mr.

Content Creation Collective (London, England This is a group for the best, brightest and most passionate content creators in and around the UK. We'll focus mainly on online content, but I'm sure the old offline to online to offline again debate will come up from time to time! We all work in a time when there's a focus on quality content like never before... the convergence of journalism, design, SEO, copywriting, music supervision, blogging, PR, videography, software dev and social media has made content creators the new superstars of the online stage. Purpose: To meet and network with others who share your passion for great content creation, and for whom normal working hours just aren't enough time to spend talking about editorial, copy, videos, infographics and just generally quality creative output. It's also for those who believe fervently that a couple of drinks and good company are a definite bonus when discussing all the exciting opportunities that exist in this industry. Why?

Social Marketers Don’t Walk The Talk Brand and agency marketers don’t see social media marketing as a lead or sales generation channel, don’t spend much money on it but insist that it’s an integral part of the marketing and business mix. Those are my early takeaways from Adobe’s Quarterly Digital Intelligence Briefing on Managing and Measuring Social produced by Econsultancy. Certainly, charts and graphs can be misleading when not spending ample time cross-tabbing the data and checking this angle and that, but here are the survey results of over 650 marketing professionals, a nearly even distribution of agency and brand-side and B2C/B2B, that helped me to that assertion: When asked what are the top roles for social within the organization, lead generation was fifth and sales was seventh in the pecking order with awareness taking the top role. When asked how much is spent annually on social media marketing activity, 60 percent of businesses that generate less than £100 million (in British pounds – more on U.S.

For Customer Experience, "Just OK" Is Not OK Excellent customer experiences fuel growth, drive loyalty, are emotionally rewarding, and inspire people to become vocal champions of brands and the organizations behind them. In 2012, three out of every four organizations recognized this and told Forrester that their goal was to “differentiate on the basis of customer experience.” In real life, most brands scored in the “OK” or “very poor” categories, according to Forrester’s 2012 customer experience index. Only 3% were ranked as “excellent,” a sharp decline that started in 2007 and is now at an all-time low. Going into 2013, we are finally at a place where despite nonstop and accelerating change, we have a better grasp of the ways in which people’s behaviors and attitudes continue to be reshaped by the digital age. Here’s a snapshot of what we know about the 3%: First and foremost, these organizations have a clear purpose that is visible and understood by all. We also know that getting started is often the key barrier. 1. 2. 3. 4. 5.

Social Media Week 2012: A Bird's Eye View - Online Marketing Network Following on from the partnership between OMN London and Adobe for our hugely successful Social Media Week 2012 event in February, I’m belatedly posting the infographic that the guys at Adobe created using their Social Analytics platform to extrapolate some interesting data from the buzz around the event. There’s some fascinating stuff here, I particularly like the fact that there were enough tweets on Monday the 13th February using Social Media Week hash tags to create 12, yes 12! 40,000 word novels! Here’s another one: during the week, the overall reach of #SMWLDN was an incredible 39.9 million! Check out some of the other stats and key influencers in this infographic brought to you by @AdobeUK #AdobeSocial.

Channel Sustainability Retail IT Leaders Weigh In Channel sustainability is an important topic among retail IT solutions providers today, especially with the emergence of iPads and the shift to a recurring revenue model. Members of the Industry Vision Panel at RetailNOW 2012 provided their take on channel sustainability and recommended actions for resellers. Jim Roddy, BSM: Everyone is concerned about channel sustainability. (Retail Solutions Providers Association CEO) Joe Finizio was talking about it this morning. You can wring your hands about it and fret, or you can do something about it. What actions would you say a reseller needs to take today to make sure that their business is relevant and thriving five years from now? Justin Scopaz, Ingram Micro: Go on the offensive. As far as one action to take, leverage distribution. Ray Carlin, HP: I would focus on embracing the change and the opportunity. Ted Clark, IBM (Toshiba): I'm going to give a little different version of this.

Who Needs Y Combinator, Anyway? Not These Two Dropouts The words “entrepreneur” and “dropout” are often associated; think Mark Zuckerberg, leaving Harvard for bigger things, or the young people goaded and funded by Peter Thiel. It’s easy to imagine a college student planning to drop out of school to join Y Combinator; rarer, though, is the person who has gotten his startup into that famous accelerator, only to abandon it. Yet that’s what Noah Ready-Campbell did. Not long after withdrawing their micropayments company from Y Combinator, the team decided to further pivot into a completely different business, a secondhand clothing marketplace for women called Twice. If The Shoe Doesn't Fit, Ditch It Ready-Campbell and Calvin didn’t bail on Y Combinator because of any real animosity for the program; it just wasn’t the right moment, nor was it the right fit. There was something else that irked them a little about Y Combinator. “No one dropped out,” Ready-Campbell says of their investors. A couple of bros were going to sell cute dresses online.