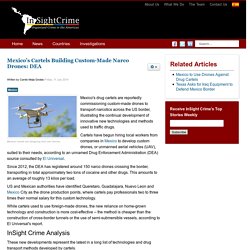 Cartels have begun hiring local workers from companies in Mexico to develop custom drones, or unmanned aerial vehicles (UAV), suited to their needs, according to an unnamed Drug Enforcement Administration (DEA) source consulted by El Universal. Since 2012, the DEA has registered around 150 narco drones crossing the border, transporting in total approximately two tons of cocaine and other drugs. This amounts to an average of roughly 13 kilos per load. 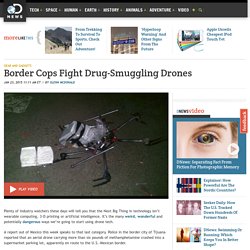 It’s the many weird, wonderful and potentially dangerous ways we’re going to start using drone tech. A report out of Mexico this week speaks to that last category. Police in the border city of Tijuana reported that an aerial drone carrying more than six pounds of methamphetamine crashed into a supermarket parking lot, apparently en route to the U.S.

-Mexican border. At Disney, Drones Could Steal The Show Local reports say the drone was a Spreading Wings S900 model — a six-propeller UAV designed for use in filmmaking, which retails for about $1,500. Authorities say the drone likely crashed from carrying too much weight. Drones, Jetpacks Take Stage At Futuristic Festival This isn’t a new problem for the border cops, either. One final stat drop: According to a recent Washington Post report, the U.S. Via BBC Credit: Tijuana Municipal Police. Drone carrying drugs crashes near US-Mexico border. 22 January 2015Last updated at 07:18 ET The six-propeller drone crashed in a car park A drone carrying more than six pounds (2.7kg) of methamphetamine has crashed near Mexico's border with the US. 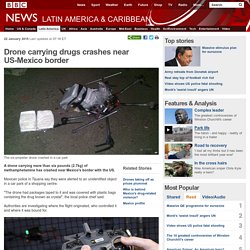 Mexican police in Tijuana say they were alerted to an unidentified object in a car park of a shopping centre. "The drone had packages taped to it and was covered with plastic bags containing the drug known as crystal", the local police chief said. Authorities are investigating where the flight originated, who controlled it and where it was bound for. Authorities are investigating who controlled the drone Police say it is not the first time a drone has been used for smuggling drugs across the border. In April, US authorities in South Carolina found a drone outside a prison fence which had been carrying mobile phones, marijuana and tobacco. Other attempts to smuggle drugs have included catapults and ultralight aircraft. How Drones Help Smuggle Drugs Into Prison. Over the weekend, a 28-year-old man was arrested on suspicion of using a small quadcopter drone to smuggle an unknown quantity of illegal drugs into a prison in Melbourne, Australia. 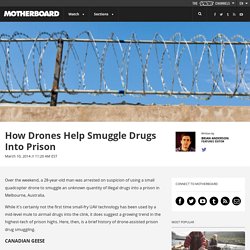 While it's certainly not the first time small-fry UAV technology has been used by a mid-level mule to airmail drugs into the clink, it does suggest a growing trend in the highest-tech of prison highs. Here, then, is a brief history of drone-assisted prison drug smuggling. In November 2013, guards at Hull jail in Gatineau, Canada, spotted a small drone flying over the prison's walls. An exhaustive search of both Hull's grounds and the immediate vicinity turned up nothing by way of whatever contraband the drone might have been toting around. Nevertheless, it didn't appear to be one-off incident "This sort of thing happens often in prisons all across Quebec," Stephane Lemaire, president of Quebec's correctional officers' union, told the Ottawa Sun. Finaly, a few more details on the Melbourne incident.

Are drug-carrying drones the future of smuggling? Probably not, DEA says. Are drones the technological drug "mules" of the future? 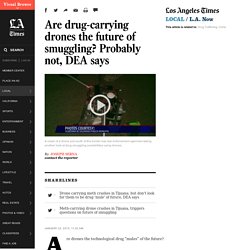 Almost certainly not, say Drug Enforcement Administration officials. On Tuesday a drone carrying methamphetamine crashed in Mexico not far from the San Ysidro border crossing this week, triggering an investigation by Tijuana police and raising the question of whether the technology is a new avenue for drug smuggling. But drones just don’t seem to be a cost-effective way of drug smuggling, said DEA spokeswoman Amy Roderick. “This method will only allow a small amount of drugs to be flown at a time, and that coupled with the ease of detection, does not make this method very profitable to these drug trafficking organizations whose motivation is money," she said.

In this week's case, an anonymous resident in Tijuana called local police and reported seeing a “flying artifact” with packages attached crash in a shopping center parking lot. The packages were secured to the drone with tape and black adhesive, police said.