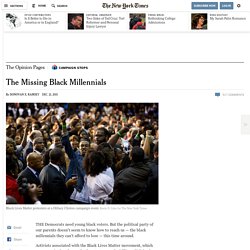 But the political party of our parents doesn’t seem to know how to reach us — the black millennials they can’t afford to lose — this time around. Activists associated with the Black Lives Matter movement, which sprang up in the aftermath of protests over the killing of Michael Brown in Ferguson, Mo., have been challenging the Democratic presidential candidates Bernie Sanders and Hillary Clinton over the past few months through direct action and protests at their campaign events.

So far, the candidates have responded reluctantly to the prodding, and in ways that show they underestimate the number of voters behind the movement. In 2008, roughly 11 percent of the electorate were first-time voters. Black youth turnout increased a full eight percentage points between 2004 and 2008, with more than half of eligible young black voters casting ballots in the 2008 election.

Recently, Mrs. Mr. Continue reading the main story. Barack Obama and the Enduring Legacy of Amiri Baraka. In practically every activity he pursued, the poet, activist, and iconoclast Amiri Baraka, who died earlier this month, was an intellectual and creative lightning rod. 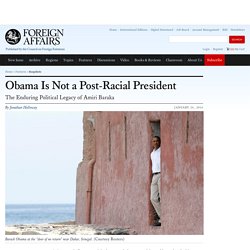 His advocates saw in him a "truly free black man" who was unafraid to speak truth to power. His detractors saw someone who traded in insult, posturing, and conspiracy. Why House Republicans Alienate Hispanics: They Don’t Need Them. Photo Political analysts keep urging the Republican Party to do more to appeal to Hispanic voters. 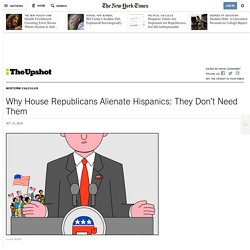 Yet the party’s congressional leaders show little sign of doing so, blocking an immigration overhaul and harshly criticizing President Obama for his plan to defer deportation for undocumented migrants. There’s a simple reason that congressional Republicans are willing to risk alienating Hispanics: They don’t need their votes, at least not this year. Blacks Voted at a Higher Rate than Whites in 2012 Election &mdash; A First, Census Bureau Reports - Voting - Newsroom. About two in three eligible blacks (66.2 percent) voted in the 2012 presidential election, higher than the 64.1 percent of non-Hispanic whites who did so, according to a U.S. 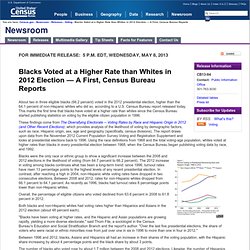 Census Bureau report released today. This marks the first time that blacks have voted at a higher rate than whites since the Census Bureau started publishing statistics on voting by the eligible citizen population in 1996. These findings come from The Diversifying Electorate -- Voting Rates by Race and Hispanic Origin in 2012 (and Other Recent Elections), which provides analysis of the likelihood of voting by demographic factors, such as race, Hispanic origin, sex, age and geography (specifically, census divisions).

The report draws upon data from the November 2012 Current Population Survey Voting and Registration Supplement and looks at presidential elections back to 1996. Overall, the percentage of eligible citizens who voted declined from 63.6 percent in 2008 to 61.8 percent in 2012. Gender and Age Differences. Fight ends over early voting in Ohio as US Supreme Court refuses to step in. The US Supreme Court on Tuesday declined an invitation to enter a raging election-year legal dispute in Ohio over the state legislature’s decision to eliminate one form of early voting for most voters in the three days prior to the Nov. 6 election. 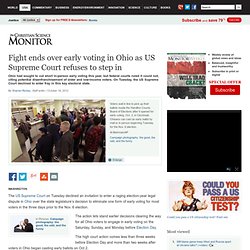 Skip to next paragraph Subscribe Today to the Monitor Click Here for your FREE 30 DAYS ofThe Christian Science MonitorWeekly Digital Edition. Court Blocks Texas Voter ID Law, Citing Racial Impact. The three-judge panel in United States District Court for the District of Columbia called Texas’ voter-identification law the most stringent of its kind in the country. 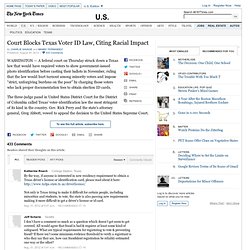 Obama Needs 80% of Minority Vote to Win 2012 Presidential Election. For all of the numbers swirling around the presidential campaign as the nominating conventions approach, each side’s equation for success can be succinctly expressed. 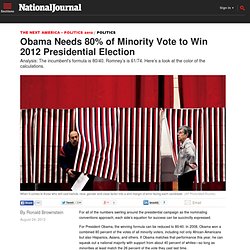 For President Obama, the winning formula can be reduced to 80/40. In 2008, Obama won a combined 80 percent of the votes of all minority voters, including not only African-Americans but also Hispanics, Asians, and others. If Obama matches that performance this year, he can squeak out a national majority with support from about 40 percent of whites—so long as minorities at least match the 26 percent of the vote they cast last time. Obama’s strategic equation defines Mitt Romney’s formula: 61/74. Romney’s camp is focused intently on capturing at least 61 percent of white voters. Why Minorities Will Decide the 2012 U.S. Election. With Republican Mitt Romney now his party’s presumptive presidential nominee, both his campaign and President Obama’s re-election effort are barnstorming the nation for votes. 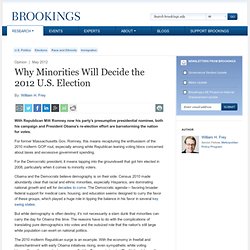 For former Massachusetts Gov. Romney, this means recapturing the enthusiasm of the 2010 midterm GOP rout, especially among white Republican leaning voting blocs concerned about taxes and excessive government spending. For the Democratic president, it means tapping into the groundswell that got him elected in 2008, particularly when it comes to minority voters. Obama and the Democrats believe demography is on their side.

Census 2010 made abundantly clear that racial and ethnic minorities, especially Hispanics, are dominating national growth and will for decades to come. Texas redistricting discriminates against minorities, federal court says. “The only explanation Texas offers for this pattern is ‘coincidence,’ ” wrote U.S. 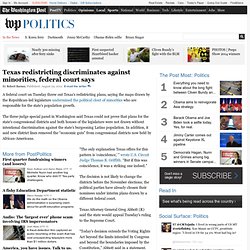 Circuit Judge Thomas B. Griffith. “But if this was coincidence, it was a striking one indeed.” With Boom in Hispanic Voters, Obama Sees Opportunity in Arizona. Black Like Him: Obama's Narrow Path to Reelection, by Charles P. Pierce.