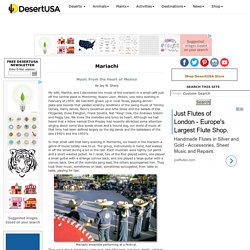 Sharp My wife, Martha, and I discovered the music of the mariachi in a small café just off the central plaza in Monterrey, Nuevo Leon, Mexico, one rainy evening in February of 1959. We had both grown up in rural Texas, playing dinner-plate-size records that yielded scratchy renditions of the swing music of Tommy Dorsey, Harry James, Benny Goodman and Artie Shaw and the ballads of Ella Fitzgerald, Duke Ellington, Frank Sinatra, Nat “King” Cole, the Andrews Sisters and Peggy Lee. We knew the melodies and lyrics by heart. Although we had heard that a fellow named Elvis Presley had recently attracted some attention singing about some blue suede shoes and a hound dog, our world of music at that time had been defined largely by the big bands and the balladeers of the late 1940’s and the 1950’s. In that small café that rainy evening in Monterrey, we heard in the mariachi a genre of music totally new to us.

Once a Texan, always a Texan, it seems. 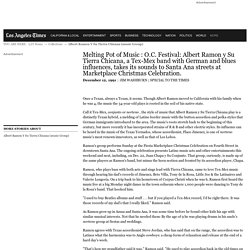 Though Albert Ramon moved to California with his family when he was 4, the music the 34-year-old plays is rooted in the soil of his native state. Call it Tex-Mex, conjunto or norteno , the style of music that Albert Ramon y Su Tierra Chicana play is a distinctly Texan hybrid, a melding of Latino border music with the button accordion and polka styles that German immigrants introduced to the area. The music's roots stretch back to the beginning of this century, but more recently it has incorporated strains of R & B and other electric styles.

Its influence can be heard in the music of the Texas Tornados, whose accordionist, Flaco Jimenez, is one of norteno music's most renown innovators, as well as that of Los Lobos. Ramon's group performs Sunday at the Fiesta Marketplace Christmas Celebration on Fourth Street in downtown Santa Ana. "I used to buy Beatles albums and stuff . . . but if you played a Tex-Mex record, I'd be right there. Selena teaches about Tejano Music. Music of the Texas Mexican Borderlands part 1 of 4. Salsa music - A great salsa song Mary by Joe Arroyo. Salsa music. 2008/9 Schools Wikipedia Selection. 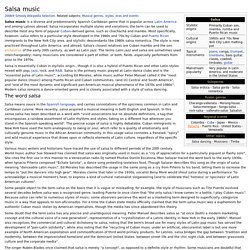 Related subjects: Musical genres, styles, eras and events Salsa music is a diverse and predominantly Spanish Caribbean genre that is popular across Latin America and among Latinos abroad. Salsa incorporates multiple styles and variations; the term can be used to describe most any form of popular Cuban-derived genre, such as chachachá and mambo. Most specifically, however, salsa refers to a particular style developed in the 1960s and '70s by Cuban and Puerto Rican immigrants to the New York City area, and stylistic descendants like 1980s salsa romantica. The style is now practiced throughout Latin America, and abroad. Salsa is essentially Cuban in stylistic origin., though it is also a hybrid of Puerto Rican and other Latin styles mixed with pop, jazz, rock, and R&B. A History of Reggae (Digital Story) Havel. Edward Havel Rhetoric of Reggae Research Paper Professor Alfred Snider (Tuna) Drums and Bass Guitar: The Foundation of Reggae Music Reggae is a style of music that needs a strong backbone and a strong driving force. 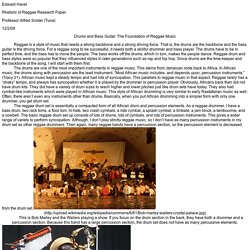 The Best Powwow Song I Heard In A Long Time... The last of the Mohicans The Best Ever by Alexandro Querevalú. Native American celebration. Powwow, a celebration of American Indian culture in which people from diverse indigenous nations gather for the purpose of dancing, singing, and honouring the traditions of their ancestors. 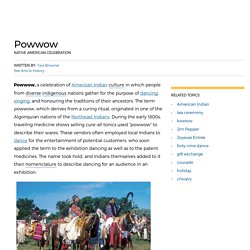 The term powwow, which derives from a curing ritual, originated in one of the Algonquian nations of the Northeast Indians. During the early 1800s, traveling medicine shows selling cure-all tonics used “powwow” to describe their wares. These vendors often employed local Indians to dance for the entertainment of potential customers, who soon applied the term to the exhibition dancing as well as to the patent medicines. The name took hold, and Indians themselves added to it their nomenclature to describe dancing for an audience in an exhibition. Today powwows take place over a period of one to four days and often draw dancers, singers, artists, and traders from hundreds of miles away. Gatherings similar to powwows existed in most native communities long before the advent of European settlement. Mexico's top mariachi schools - BBC News. History of the Mariachi. Mariachi and Dance It is important to remember the son-and other types of Mariachi music- is not just music to be played and sung. 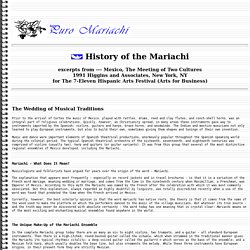 From the very start it was music to be danced. The traditional dance technique associated with both the son jalisciense and son jarocho is the zapateado, a distinctive type of footwork that originated in Spain.