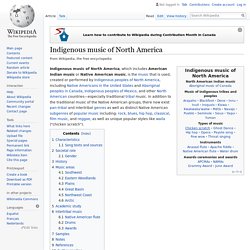 Vocalization takes many forms, ranging from solo and choral song to responsorial, unison and multipart singing. Percussion, especially drums and rattles, are common accompaniment to keep the rhythm steady for the singers, who generally use their native language or non-lexical vocables (nonsense syllables). Traditional music usually begins with slow and steady beats that grow gradually faster and more emphatic, while various flourishes like drum and rattle tremolos, shouts and accented patterns add variety and signal changes in performance for singers and dancers.[1] Song texts and sources[edit] Native American song texts include both public pieces and secret songs, said to be "ancient and unchanging", which are used for only sacred and ceremonial purposes.

Music plays an integral role in the life of Native Americans. It is used for ceremonial purposes, recreation, expression, and healing. There are many different instruments used when making Native American music, including drums, flutes, and other percussion instruments. Perhaps the most important element of their music is the voice. Vocals are the backbone of the music made in Native American cultures.

Many researchers feel that Native American music is some of the most complex ever performed. Related Stories: Nakai: Earth Spirit - Native American Music. Encyclopedia of the Great Plains. Music lies at the heart of Indian culture. 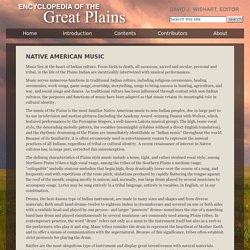 From birth to death, all occasions, sacred and secular, personal and tribal, in the life of the Plains Indian are inextricably intertwined with musical performances. Music serves numerous functions in traditional Indian culture, including religious ceremonies, healing ceremonies, work songs, game songs, courtship, storytelling, songs to bring success in hunting, agriculture, and war, and social songs and dances. As traditional culture has been influenced through contact with non-Indian cultures, the purposes and functions of music have been adapted so that music retains its meaningful role in cultural identity. Native American Traditional Pow Wow Music. History of Cajun music. This article is about the history of Cajun music, which is not to be confused with Acadian music or French Creole music. 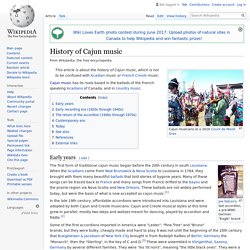 Cajun music has its roots based in the ballads of the French-speaking Acadians of Canada, and in country music. Early years[edit] Joe Falcon's last accordion, a pre-WWII German "Eagle" brand. History and Origins of Cajun Music - The Bayou Bandits ~ Sounds of Louisiana ~ The NorthEast's Premier Cajun-Zydecco Band. Dewey Balfa at left with Eli Stutes performing in the LSUE Acadian Center in 1979 a few months after the tragic death of Dewey's brothers, Rodney and Will, in a highway accident. 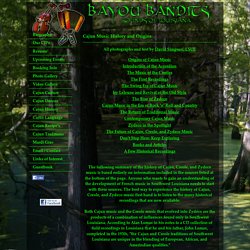 The Balfa Brothers have been described as the "quintessential Cajun band. " Vinesse LeJeune on fiddle and Alphonse "Bois Sec" Ardoin on accordion with Canray Fontenot behind them performing in the LSUE Acadian Center in 1979. Different versions of these musical subgenres like Cajun-country continue until this day, but one more development is of crucial importance in shaping Cajun music. In 1964, Gladius Thibodeaux, Louis "Vinesse" LeJeune, and Dewey Balfa (who joined as a last minute replacement playing guitar) accepted an invitation to represent Louisiana performing traditional Cajun music at the Newport Folk Festival. After their performance, they received a standing ovation.

Zydeco: Creole Music and Culture in Rural Louisiana. History of Celtic Music - Celtic Rings Ltd. Celtic music is defined as music that originates from the countries of Ireland, Scotland and Wales. 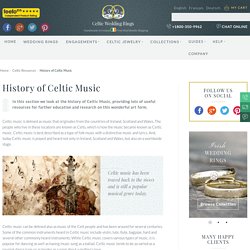 The people who live in these locations are known as Celts, which is how the music became known as Celtic music. Celtic music is best described as a type of folk music with a distinctive music and lyrics. And, today Celtic music is played and heard not only in Ireland, Scotland and Wales, but also on a worldwide stage. Celtic music has been traced back to the 1600's and is still a popular musical genre today. What Is Traditional Irish Music? By Megan Romer Updated February 23, 2016. 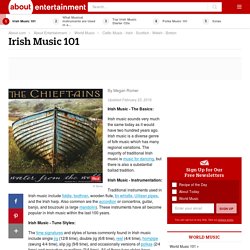 Celtic music. Rapalje performing in 2010 Description and definition[edit] An 18th century depiction of an ancient Druid playing the harp These following melodic practices may be used[4] widely across the different variants of Celtic Music: It is common for the melodic line to move up and down the primary chords in many Celtic songs. 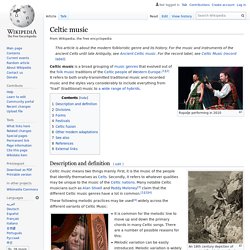 There are a number of possible reasons for this: Melodic variation can be easily introduced. These two latter usage patterns may simply be remnants of formerly widespread melodic practices. A History of Irish Music. FEATURED eBOOKS Truelove's Journal: A Bookshop Novella "Beautiful, different and touching. 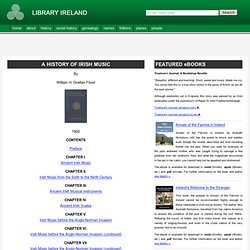 Short, sweet and lovely. Made me cry. You sense that this is a true story veiled in the guise of fiction as are all the best stories. " Reggae. Music genre from Jamaica Reggae () is a music genre that originated in Jamaica in the late 1960s. The term also denotes the modern popular music of Jamaica and its diaspora.[1] A 1968 single by Toots and the Maytals, "Do the Reggay" was the first popular song to use the word "reggae", effectively naming the genre and introducing it to a global audience.[2][3] While sometimes used in a broad sense to refer to most types of popular Jamaican dance music, the term reggae more properly denotes a particular music style that was strongly influenced by traditional mento as well as American jazz and rhythm and blues, especially the New Orleans R&B practiced by Fats Domino and Allen Toussaint, and evolved out of the earlier genres ska and rocksteady.[4] Reggae usually relates news, social gossip, and political commentary.

Reggae has spread to many countries across the world, often incorporating local instruments and fusing with other genres. Etymology[edit] A History of Reggae Music. Jamaica: the mento TM, ®, Copyright © 2003 Piero Scaruffi All rights reserved. 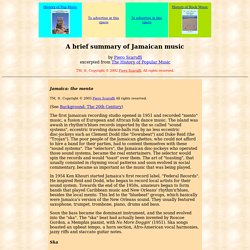 Dodd and Sound Demension Rhythm & Sound () - Rhythm & Sound [Amazon.com] [FR] [DE] [UK] with Tikiman on vocals, released by a Detroit-Berlin crew Basic Channel, headed by Maurizio Von Oswald. Reggae Heritage: Jamaica's Music History, Culture & Politic: Lou Gooden: 9781410780621: Amazon.com: Books. Salsa music. Conga drums, one of the foundational instruments of salsa music. Salsa as a musical term[edit] "In 1973, I hosted the television show Salsa which was the first reference to this particular music as salsa. I was using [the term] salsa, but the music wasn't defined by that. Salsa - History and Overview of Salsa Music. By Tijana Ilich Updated September 11, 2016.

Salsa is a word that inspires an instant reaction in Latin music lovers everywhere. It is the rhythm, the dance, the musical excitement that sends millions of normally sedate non-Latinos to the dance floor where they meet their Latin neighbors, who are too busy enjoying the music to notice. Birthplace of Salsa There’s a lot of debate about the place where salsa was born. But there’s little doubt that if salsa had a passport, the date of birth would be the 1960s and stamped under place of birth would be New York, New York.

Evolution of Salsa Between 1930 and 1960 there were musicians from Cuba, Puerto Rico, Mexico and South America coming to New York to perform. Latin Music History - Cultural Mix & Social Environment. By Carlos Quintana Latin music is the result of a complex social and historical process that took place in the Americas after the arrival of Columbus. Despite the traumatic experience, Latin music is one of the positive outcomes that came from that process. Salsa Music History. The salsa music history goes a long way back. In the 1940’s this style of music was knows as Afro-Cuban Jazz. This Afro-Cuban jazz was played mainly in New York by immigrants from Puerto Rico. It was mainly due to embargo on Cuba starting in the 1960’s that the musicians needed a different name for there music as Afro-Cuban was no longer an option because it related to Cuba.

This is when they the term Salsa was introduced. Fania Records By the 1970s, numerous artists joined Fania Records. Diversification. Music Highlights. Tex-Mex: Music of the Texas Mexican Borderlands [DVD] [1998] 1998. Tejano music.